If you missed Part I of my New Fall Television Shows review, you can read it here: itsnotaboutme.tv/news/tv-reviews-new-fall-television-shows-2014-part-i

I guess I’m right about a lot of them because several that I approved of, like Black-ish and Forever, have already been renewed, and many that I hated, like Selfie, Bad Judge, Manhattan Love Story, and A To Z, have already been cancelled!!! And I believe that Mulaney (second review below,) is about to join them. (At least I hope it is!)

So, I guess I am a good judge of what’s good and not. Read on for the second half of the season’s newbies. (And remember—I’m reviewing only new network shows.)

[Note#1 : I wrote some of these reviews weeks ago, when the shows first came on, but held them until all the new shows aired.] [Note #2: I left-out Constantine because I just can’t force myself to watch occult kind of shows. Sorry.] 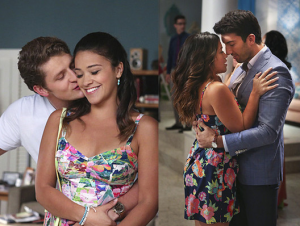 See why I don’t know which guy to root for? Which one would YOU go for???

Jane the Virgin (CW)–I love this show!!! It has everything! I have to admit that at first, I was a tad confused because there were so many storylines. But I could not believe how much had already happened by the end of episode three. It’s so jam-packed. And I have no idea which way anything will go. My only problem with it is that I like both lead guys, so I keep agonizing over which one to root for. Mature of me, eh? Maybe that’s why I watch the CW to begin with!!!

Mulaney (Fox)–There’s so much to say about this show, and it’s all bad! Where shall I start? This is possibly the worst supposed sitcom I’ve ever seen! It’s not funny, some lines are actually offensive, the main dude can’t act…at all, and everyone else is overacting to the max. Lorne Michaels is losing it–first the dreadful first few SNLs of the season, and now this lummox. Not even Martin Short, of whom I’m a big fan, can make it funny. And, are they thinking they’re making it Seinfeld? With the stand-up opening and tag, the group of zany pals, including one girl with boy problems, and one weirdo who drops in. It’s a straight-up rip-off except for one thing–Mulaney isn’t funny!!! They tried to get it on the air last year, with no luck, and it should have stayed that way. I think Fox picked it up just to get in good with Lorne. What a piece of crap. It’s like a long bad SNL skit. Mr. X said it’s not a sit-com, it’s a sit-bomb!

Cristela (ABC)–This is the only series on the list (that I first read the roster of new shows on) that didn’t even have a network listed for it!  I think they were trying to spare ABC the embarrassment. It’s supposedly a sitcom, (although Mr. X and I didn’t even smile once during the pilot!,) about a female Latina in law school later in life. But it’s one hundred percent insulting to Latinos! It’s wall-to-wall Latino jokes, not even one lawyer one! But all totally un-funny ones. And most of them predictable. I said half the lines before the actors did! I love being right, but not in this sad case.

Marry Me (NBC)–So far, I’ve had time for only the pilot. But it looked promising. I had some good laughs. I’ll be going back for more, as soon as I can find the time.

The McCarthys (CBS)–I actually like this sitcom about an Irish family in Massachusetts. The best part to me is adorable Tyler Ritter. I had no idea anything about this show before I saw the pilot, but the second I saw it, I knew he had to be a John Ritter son. He looks so much like his dad and brother, (actor Jason,) but is by far the cutest of them. And, here’s some news for him, should I ever meet him: he and his brother saw me pee (by accident, of course,) when they were little!!! That’s an ice-breaker if I ever heard one.

State of Affair (NBC)–I literally had to force myself to keep watching this pilot. It was almost torture. It’s another one like Madam Secretary whose fake angst we don’t need when we have it all, unfortunately, in real life. And the story was incredibly hard to follow. (And I have a 147 IQ!) But something happened at the end that made me decide to try one more episode. I think it was the appearance of a mysterious co-hort. (Don’t all shows like this have one of them?) I’m pretty sure I’ll abandon it soon enough, but, as of now, I plan to go back for one more. As long as I can have something else to do while the first forty-five minutes of it are on! 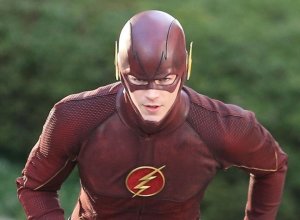 The Flash (CW)–I had no problem that the guy got hit by lightning, and became the fastest human on earth. But what I do have a problem is with, is: how was he in a coma for nine months, but woke-up with perfect hair??? How did it not grow at all for the nine months, and stayed moussed/gelled the whole time? And he didn’t have even one whisker on his face! How is that even possible? And how did he get out of Star Lab so quickly the first time, before he had the power of swiftness? The place was a condemned building for nine months, and looks like it had trenches around it, and he had no jacket nor car. All that stuff is so unbelievable. And of course he has the obligatory deceased-parent-in-a-mysterious-way back-story. But Grant Gustin, the guy who plays him, is adorable!!!!!!! [Note #3: I just found-out something big! No wonder I love this guy; we have the same January 14th birthday!!! And I love me!]

And that’s it for the 2014 TV reviews. On Monday, I have one more important television event to write about—begging you all to vote for Alfonso Ribeiro on the Dancing With The Stars finale that night! Heck, let’s just get a head start on that right now: The # to vote for Alfonso and Witney is 1-800-868-3401.