Trending
You are at:Home»TELEVISION»TELEVISION: DANCING WITH THE STARS—SEASON 20
By Karen Salkin on March 19, 2015 · TELEVISION, TV REVIEWS

After all these years, and with all the annoyances about it, (especially that creepy, piggy co-host,) I still enjoy watching this show. I just wish they would change the title because there are never many real stars on it.

When I have to do research to find-out just who these people are, they’re far from stars! Heck, they’re not even celebrities! Most are famous people wanna-bes.

That’s not to put them down. They may be wonderful folks, as in the case of Army veteran, Noah Galloway. (I just had to look up his last name again, because I already forgot it from three minutes ago!) Reading what I just did about him, I admire the guy. A lot! It’s just that he’s a regular person, not a “star.” 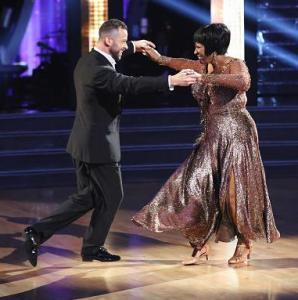 Patti LaBelle and Artem Chigvintsev. What a happy pair!

And how are the producers expecting us to consider basically an extra on Glee (Riker Lynch) to be a star on this show??? That’s just insane!!! (They decided to bill him as a musician, instead, because he’s in some obscure rock band.)

They actually do have one real star on there this season, and she’s a major one! How ever did they get the incredible Patti LaBelle to do this show??? I can’t imagine. But, when I was a kid, I witnessed her being a background singer for folk-y Laura Nyro, after she had already achieved her own fame, so perhaps she doesn’t mind not being seen as the major star that she is. I’m rooting for her all the way!!!

And she was great! Her dance was beautiful, with perfect Patti LaBelle flourishes. I love her with Artem. He’s the perfect partner for her. He’s so kind and reverent. Their foxtrot actually made me cry. 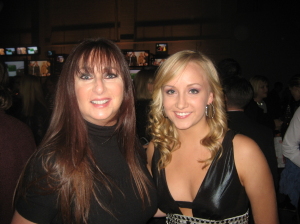 Before I saw the show, I thought that Patti might be the only one I like this season. But then I remembered my former New Best Friend, Olympic Gymnastics Champion, Nastia Lukin, who I feel has this one sewn-up. She’s probably the reason Derek Hough agreed to do one more season, after he had already bowed-out. Nastia is a ringer! (Oh, how was she once my New Best Friend, you’re wondering? The story is here, as I wrote in this earlier column: itsnotaboutme.tv/news/listsports-nicest-olympians-ive-met. But if you don’t have time to click over, I’ll repeat it at the bottom of this one.)

The judges way under-marked Nastia this first time! I feel that it’s because they don’t want to look like they’re favoring the best one from the start, nor Derek, (who’s proven time and time again that he’s the best pro.) I guarantee that no one else in the competition is capable of doing what this team can do on the dance floor!!!

[Note: I just found-out that Derek is starring in a twelve-shows-a-week show at Radio City Music Hall during this entire season of DWTS! And Nastia is in college in New York, too! So, they have to fly into LA every week just to do the TV show, and fly right back to NY! And choreograph and rehearse in-between it all! That’s craaazy!]

Now that I’ve already lauded Patti and Nastia, here are my impressions of the rest of the cast, in, as they say on the show, no particular order.  [Note: I’ll try to write occasional updates on these peeps, as the season progresses.]:

Charlotte McKinney with creepy Keo–Before I saw that she can’t dance, at all!, I thought that I would actually be rooting for this pretty girl, but I hate her male pro! That’s a first! He was so rude to and about his partner, Lolo Jones, last season that Mr. X and I got depressed when we even saw him just be in a group dance number after that! We were hoping they’d get rid of him for good, but I knew they wouldn’t. Prior to last season, (Keo’s first,) I had had a feeling they were looking for a non-Caucasian pro for a long time, but I was hoping they’d wait for that cute-ish guy from last summer’s So You Think You Can Dance. He wasn’t very good, either, but at least he was much better than Keo. And not a d-bag! But, back to Charlotte–how is she a model with those horrible abnormal boobs??? Why would someone who’s pretty enough opt for those watermelons??? I actually now hope they’ll be the first to be eliminated.

Suzanne Somers—As I correctly predicted before I even saw the first show: We’ll be seeing some hair action with this one. She tries to hide her wrinkles with it, so her bangs and sides keep inching closer to and closer to being a human hair burka! And she looked awful in that leotard. Yes, she looks good for sixty-eight, but not as good as she thinks she looks. She had that poochy stomach sticking-up from the bottom, that Spanx couldn’t even help that much. They never should have let her wear that outfit. Someone must have told her what she looked like (after she had already danced,) because she’s the first person in the history of the show to change her outfit just to wave at the end. She put on a little black dress and heels, and looked way better. And, oh—her dancing was pretty weak, too.

Michael Sam—He was really good, and I think he’ll get much better still. Michael is adorable and sweet, and pro Peta is a good fit for him. I love them together. I just hope that homophobes don’t bother voting!

Noah Galloway—How can you not root for the guy? And he was amazing, considering that he lost two limbs in the war. But the judges way over-marked him, as well. It looks like they used a sliding scale because he was excellent for his circumstances, but not very good compared to the rest. It’s sort-of not fair, but I’m glad we, the viewers, are getting to see someone who’s above the usually frivolous contestants. (And yes, his presence does make me feel pretty bad for my shallow critiques of many of the others, but I’m here to entertain, by calling ‘em as I see ‘em. And as I’m sure many of you see them, too!)

RedFoo—I really thought he would do well. After all, we know he can dance, and he always brings the fun. But his opening number was pretty weak, mainly due to his partner, I feel. I hate to say it, because she seems like such a nice girl, but pro Emma Slater is not a very good choreographer. Redfoo would have been great with Cheryl Burke. Or Karina Smirnoff. I hope he stays long enough to show us what he’s really got! 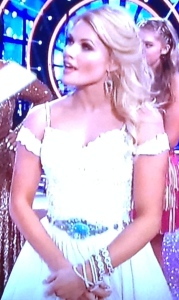 Chris Soules’ adorable pro partner, Witney Carson. Photo by Karen Salkin. So, do you think he’d prefer her or…

Rumer Willis—[Before I saw the first show, I wrote this: Sorry to say, but I can’t even look at her! With all the money her parents have, they couldn’t have gotten her some visage help, like Alexa Joel’s parents finally did (after she tried to commit suicide?)] But after I saw her dance, I was impressed. That was the absolute best that girl could possibly look. And she did great!!! I think she’ll come in at least third! But her billing should be that she’s a “celeb offspring,” not really a “singer and actress,” as she said she is.

Chris Soules—I’ve never once watched the idiotic Bachelor, but I have to admit– this guy is really cute. And his dance, with Witney, was so fun. He was great. I can’t wait till he leaves his new fiancee for his pro partner! There are already sparks between them!!!

Willow Shields—I still don’t know who this is, but young teen-agers (she’s fourteen) should not be allowed on Dancing With The Stars, (even if she was a star!) It’s just creepy. And her dancing with Mark Ballas, who’s twice her age but looks much older, has something pedophelic about it. Seriously. It’s hard for normal people to watch. 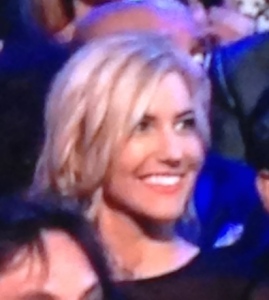 …or this woman, his new fiancee? I’m just sayin’. Photo by Karen Salkin.

Robert Herjavec—Before I saw the guy dance, I thought: Poor Kym Johnson. She finally gets to return to the ballroom, and she gets saddled with this man! But he did well enough. I just don’t care about him.

Riker Lynch—He danced well enough, but the judges way over-marked him. And he’s already annoying me.

So, I’m rooting for Patti, Nastia, Michael, and Redfoo. Chris and Rumer are, shockingly, next. I wish they could eliminate Riker, Willow, Charlotte, and Suzanne in one sweep, but that would be too much to hope for.

No matter how any of them do, it’s still hard to watch the show with that uber-creepy co-host, Erin whatever-her-name-is. Mr. X gets so disgusted every time she pulls these people over by declaring, “Get over here, you.” She’s beyond disgusting, on every level. And on this first show, she was so rude to Chris Soules’ new fiancee!!! On-air, she insinuated that he could really go for his dance partner. After he had just gotten engaged! She makes me want to puke.

One last note on the season premiere, this time a laudatory one: Sophomore judge Julianne Hough looked gorgeous! The dress, make-up, hair, even her boobs were working. I’m so glad she’s finally back to looking like her adorable self because last season, it looked like the hair and make-up teams were out to sabotage her!

We did a celeb event together in New York a couple of years ago, for Isaac Mizrahi, (who was very nice, by the way,) and she was as sweet as could be. She was so quiet that I didn’t even realize it was the Olympic champion at first! After we got our hair and make-up done during the day, we started chatting, and she laughed at everything I said. (So I knew I loved this girl already.) Then it dawned on me who she was! When we saw each other at the soiree that night, it was like we were old friends. She seemed happy when I bestowed upon her the designation of My New Best Friend. But that title is fleeting, so I’m really hoping that she’ll soon have the one of Dancing With The Stars Champion, to help her get over the loss of the MNBF one from me. You go, girl!