This tribute has taken me a long while to write because there’s so much to say about the lovely Valerie Harper. 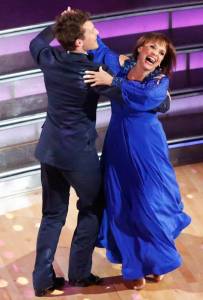 You can just see the joy on Valerie Harper’s face when she appeared on Dancing With The Stars!

I’m devastated that this world lost such an exquisite soul. Valerie Harper was one of the most charming, upbeat, supportive, and gracious people I’ve ever known. I honestly had never seen her without a smile on her beautiful face. She was always happy for others, which is rarely the case with show business people. My head has been spinning since I heard the very sad news of her passing a week and a half ago.

I actually wrote a Living Tribute to Valerie six and a half years ago, when the world first learned that she had lung cancer. So when I realized that she had lived for that many years after her devastating lung cancer diagnosis, I actually felt a bit better that we had all had her company for that much extra time. And she had fun a good part of those years, including showing us her dance talent on Dancing With The Stars, which she told me that, as a former dancer, she really enjoyed.

I’m blessed to have known such a truly beloved person. So please indulge me while I share some of my personal stories about Valerie. 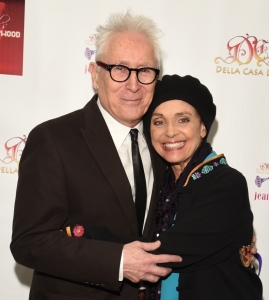 Valerie Harper with her Rhoda co-star, Ray Buktenica. Photo by William A. Kidston.

I actually first met Valerie Harper when I was just a young girl out here from Brooklyn, and my close personal friend, Ray Buktenica, was starring on Rhoda with her. He introduced us quickly after a taping one night, and even though that’s all she knew of me, Valerie was always friendly whenever we’d run into each other after that.

Then years later, when I had been doing my TV show, Karen’s Restaurant Revue, for about eighteen months, I bumped into her backstage at a concert in the Pasadena Civic Auditorium. I noticed that I was going down the back stairs right behind Valerie, so I summoned all my courage to say hi, and remind her that we had met years before, and that she knew my boyfriend.   So, I said, “Excuse me, Valerie. I’m [Mr. X’s real name]’s girlfriend.” Before I could finish my greeting, she stopped in her tracks, let out a small scream, and said, “You are not [Mr. X]’s girlfriend—I love your show! So he’s your boyfriend!” I could not believe it. Her kind comments made me feel that I had arrived in the business! I was so honored that the Valerie Harper knew who I was on my own! 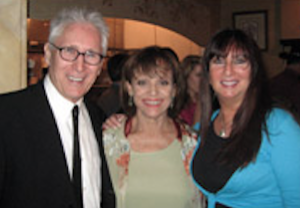 And from that moment on, we’ve always known each other. Many other show biz “fans” of my show have forgotten me over the years; once my temporary status as the ‘”it” girl was over, so was their knowledge of me. But not Valerie. She was even nicer than her character Rhoda was!

And then, a few years after that, when Mr. X and I were at an opening night at the Ahmanson Theatre, the person behind us tapped me on the shoulder, and said, “Hi, you two!”  It was Valerie, rocking new bangs. When I told her how much I loved them, and said that they made her look even younger, she told me that she cut them thinking of me, and that she now understood why I’ve worn them myself for so many years. That was an “OMG” moment for me, for sure. 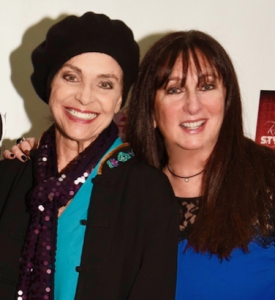 Valerie Harper and Karen Salkin. Photo by William A. Kidston.

And here’s an example of just how nice Valerie Harper was to absolutely everyone! Several years ago, I was hired to do celebrity interviews at an event for the NFL. Valerie was one of those celebs, and since we had already known each other for a long time at that point, talking to her on camera was a breeze. But there was a crazy girl there, who had seen my show and was trying to be me, so she somehow got into the event with her own crew, and was trying to do what I was already doing! It was obvious to everyone that she was nutty, but when she stuck a microphone in Valerie’s face, and pretty much forced her to do basically the same interview she had just done with me, Valerie very amiably obliged. But when they were done, Valerie sought me out to tell me that she could tell that the girl was a tad strange, but that she just couldn’t say no. All of it was so Valerie—being uber-pleasant to even someone she thought little of, and then also explaining the situation to me when she positively did not need to do that. It was all so typical of her ever-present thoughtfulness, all the way around.

The last photo I took of Valerie Harper, enjoying a loving moment with Ray Buktenica. Photo by Karen Salkin.

Another time that I bumped into Valerie was an extra-special surprise for me. I was in New York, finishing-up the extremely sad task of cleaning-out my recently-deceased little mother’s house all by myself.  On Mother’s Day, no less. My kind friend, Lauren, had picked me up and taken me to the city to join her family for what was a sad occasion for me. I was standing in front of her apartment building, when all of a sudden I saw Valerie Harper and her wonderful husband, Tony Cacciotti, walking down the street right towards me!  We hadn’t seen each other in a few years, so to have a mini-reunion on that particular day was a Mother’s Day miracle! They were in town to educate the public about women’s cancers, and they told me they love New York so much that they were thinking of moving there.

But I’m glad they did not because that gave me more opportunities to run into them again in LA, which I happily did.

The four of us, (Valerie, Tony, Mr. X, and I,) spent a wonderful evening together a couple of years ago. I could tell that she wasn’t feeling great, but the smile never left her face all night. She told me that Tony is the best caregiver ever. You could just see the love between the pair of them. I’m so grateful that she had someone so wonderful to take care of her for these past six years, and always, actually.

I’m also thankful that I got to spend even that little bit of time in life with Valerie. I’m richer for it, as is every person she’s ever touched.