Trending
You are at:Home»TRIBUTE»TRIBUTE: ROBIN WILLIAMS
By Karen Salkin on August 12, 2014 · TRIBUTE

I actually was choosing between four different columns that I had planned for today, but I realize that right now, not many people can concentrate on anything other than Robin Williams’ shocking death yesterday.

I woke up yesterday morning afraid to turn on the computer because I had a horrible feeling that a celebrity had died. No lie. I was relieved to find-out I was wrong. 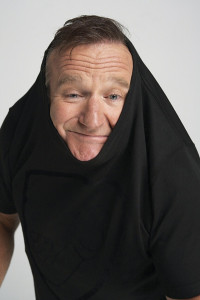 Robin Williams. I just figure he would get a kick out of someone using this as his “RIP” picture!

But then, near 4PM, came the horrible news that Robin had died. I actually thought it was some different Robin Williams because my mind could not process that horrible news. And then to read the first line of the story and find-out it was a suicide made it that much worse.

Looking back at all the interviews he had done to promo his unfortunate sitcom last year, (news channels kept playing them all night,) he appeared to be tired and troubled even back then. But who could have known it would come to this? The poor guy had so much to live for! He was a comedy icon.

I used to know Robin a bit when I was starting out in the biz, so this seems extra-weird to me. He always seemed so happy then.

So, let’s remember him that way. He’s certainly had more interesting experiences than most. He definitely packed a lot into his sixty-three years.

I just feel awful for his kids. I hope they realize that this has nothing to do with them. And that they cherish the many precious years they did have with a father who seemed to love them more than anything.

Perhaps he’s finally found the peace he was looking for.