Trending
You are at:Home»TRIBUTE»TRIBUTE: LARRY HAGMAN
By Karen Salkin on November 27, 2012 · TRIBUTE

I feel a tad odd paying tribute to a man whose major television series (Dallas) I never saw, and whom I met only once. But that meeting made such an impression on me that I want to share it here.

When I was a young actress, starting out in the headiest of ways,(by meeting some venerable older movie stars,) I was at a party at David Wayne’s house. (I still don’t see how that was even possible!) I was so star-struck by the assemblage, which included Lynn Redgrave and Fernando Lamas, that I could barely speak! (Shocking, I know, but true.) 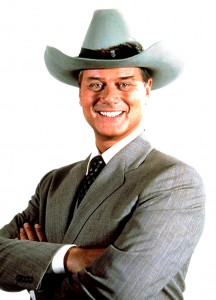 For most of the afternoon, I joined a group who was sitting on the patio facing the semi-dangerous golf course, (with plenty of captured stray balls to prove it.) I found myself right next to Larry Hagman, the real-life JR Ewing of Dallas fame! I was already taken aback by his attire–a caftan and a fez. But when I mustered-up the courage to shyly offer him some snack that was being passed, I felt awful that he didn’t answer me! He smiled slyly, but that was it. I tried again a bit later, feebly, I admit, but I felt so uncomfortable sitting there not conversing with my neighbor on the couch.

He just smiled again. Then I noticed that he was just listening to everyone, contributing nothing at all to the show biz repartee. Finally, someone explained that he doesn’t talk on Sundays! At first, I thought they were just goofing on me, since I was, by far, the youngest person there. But they were telling the truth!

I thought it was some weird religious rite wrapped up with the crazy wardrobe, and just accepted it, (though Mr. X and I referenced it occasionally over the years.) But, when I damaged my vocal chords several years later, and couldn’t talk for at least a month(!), I found-out that that’s exactly the reason that Larry Hagman had begun his “Silent Sundays!” He had also hurt his vocal chords and was advised by a doctor to adopt that one-day-a-week-of-silence practice. Having gone through it myself, I still don’t know how he did it. It’s so frustrating! But I know that he described it as “freeing,” so good for him.

Since that day, I have never seen his name or image without reflecting on that meeting. That’s a pretty powerful impression to have lasted all these years!

And now, he’s silenced forever. And you know what? I bet he’s loving being mysteriously quiet on the other side!