Trending
You are at:Home»TRIBUTE»TRIBUTE: JOHN WOODEN
By Karen Salkin on June 7, 2010 · TRIBUTE

When I read last week that legendary UCLA basketball coach John Wooden was in the hospital for dehydration, I was really worried about him. But then I told myself that he’s a survivor, and would be up and at ’em in no time. So, although he was 99-years-old, I was shocked and very saddened by his death a few days later. 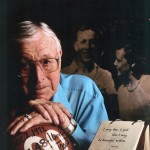 Surprisingly to me, I had never met the man, although I saw him often for a while in the mid-’90s. In 1996, I became friends with the UCLA team who had won the NCAA Championship the previous year. Kristnan Johnson, (who’s dad Marquis, a UCLA stand-out with whom I was also friendly,) often gave me one of his “friend and family” tickets, so I sat in the section opposite Mr. Wooden, and often watched as he graciously greeted each and every fan who stopped by the pay their respects.

When my pals all graduated, my then-occasional tickets moved to the grown-up section and I sat right near the Coach. I was often tempted to say hi, like everybody else was doing, but I just couldn’t bring myself to intrude on him. And I was happy to simply observe one of the truest gentlemen I’ve ever seen. Watching him meet and greet was often more interesting and exciting than the games.

Even though he was up there in age even back then, I always had the feeling that I’d get to shake his hand one day. My loss.

And now, his passing is a giant loss to the world at large, especially the sports world. His accomplishments will never be duplicated, in my opinion. In his twenty-seven years as UCLA Head Coach, they never had a losing season and own ten NCAA Championships, including seven in a row!!! Rarely does a team win two in a row nowadays, so you can see how gargantuan an achievement that is. (I believe I have my facts straight, but you can always check-up on them, and read more about the Coach’s life and his teaching philosophies, including the maxims for which he was famous, on www.coachwooden.com.)

And that’s all just his coaching career; his personal life seemed to be successful, as well. (And how many among us can actually boast that?) He appeared to be a genuinely lovely person, and his students loved him. If we were a world of John Woodens, oh how much more peaceful everything would be. I’m glad for him that he’s now re-united with his dear wife, and hope that his family will find peace, as well.