Trending
You are at:Home»HOLIDAYS»KAREN’S THOUGHTS/HOLIDAY/TELEVISION/TRIBUTE: NEWS OF THE WEEK
By Karen Salkin on November 10, 2020 · HOLIDAYS, KAREN'S THOUGHTS, TELEVISION, TRIBUTE

NEWS OF THE WEEK

When I was deciding what the topic of today’s column should be, I considered several different options. 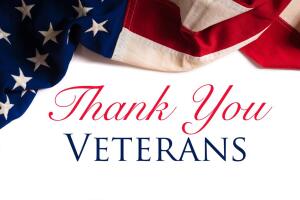 First of all, tomorrow is Veteran’s Day, which I have rarely celebrated here in INAM. There’s never much new to say about the occasion, so, shamefully, I usually neglect to honor it. But this year, with so much political angst, I figured this is the appropriate time. So, even though the day is not getting its own full column from me, please spare a thought for our veterans tomorrow, and every day, actually. And also please keep in mind that Veteran’s Day is far from being just about sales and deals!

Secondly, I want to pay tribute to Alex Trebek. I really do feel awful that the Jeopardy host lost his cancer battle on Sunday, after putting up such a valiant fight, and working until the bitter end. (He worked until the end of October, and those episodes will air until Christmas. That’s pretty amazing.) Even though many viewers seem to erroneously think that all the knowledge imparted by the show is actually from the mind of Mr. Trebek, rather the writers, I did admire his mainly flawless reading of the answers, especially his keen pronunciations. He’s already missed. And my heart goes out to his family, who shared him with the public for so long. 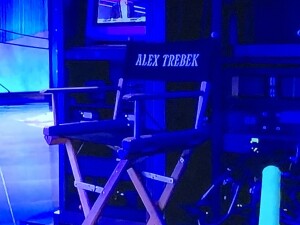 Photo by Karen Salkin, (from TV.)

Alex’s departure from this level of life would give me the future of Jeopardy as yet another subject possibility today. I think Ken Jennings is the frontrunner to take over in the new year.  He’s the obvious choice, and was recently hired by the show for a non-specific job, which was a tad suspicious from the get-go. I’d be happy to have someone who really knows all the answers to be the host, but it’s hard to listen to Ken’s lisp. So, Ken—please start trying to get rid of it right this second! [Note: My father was a Speech Chairman and gave private speech lessons; I saw him help remedy many a lisp. So it can be done with just a small amount of work. If you have one, start pronouncing “snake” correctly right now, as a start.] (And please remember that you read the Ken Jennings idea here first.)

Finishing-up that topic, it appears that both George Stephanopoulos and Ben Mankiewicz are vying for the job, but the easiest transition for everyone concerned, especially the viewers, would Ken. (Just please remember that you read the Ken Jennings idea here first.) 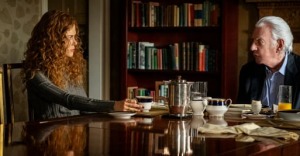 Both of my main susupects in Episode 3 of The Undoing.

Penultimately, this week-end also brought us Episode 3 of The Undoing, my obsession with which I revealed in Friday’s column, (which you can read here: itsnotaboutme.tv/news/televisionkarens-thoughts-the-undoing.) So many more clues were revealed on Sunday night. But it would take me another two thousand words to sum it all up for you!

So all those topics will have to wait until a later date because the one that won-out for the space today is—drumroll, please—the victory of Joe Biden! And for all Americans, actually. (Of course that’s my main focus for this week!) 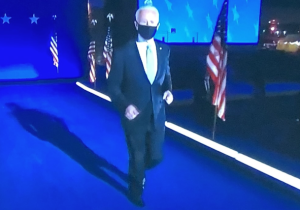 The best thing I’ve seen all year–seventy-seven-year-old Joe Biden jogging out to the podium to give his President-Elect speech! Photo by Karen Salkin.

Our four-year-long national nightmare is finally over! I don’t remember ever seeing soooo many people be excited and relieved at the same time ever before in my entire life. They were literally dancing in the streets. I suspect that more than one person felt that waking-up on Saturday morning and seeing the great news that Joe Biden is our next President felt like witnessing The Wizard of Oz change from black-and-white to color!!!

To those of you who may not love, love, love Joe Biden, it’s okay. He doesn’t have to be your fave. But he is very intelligent, fair, and caring, and will lead us well. And more than anything, his win is getting us out of the demonic clutches of Orange Hitler, and that’s beyond an excellent thing. 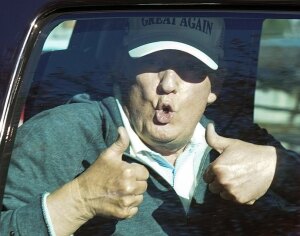 And pathetic Orange Hitler showing us his creepy tiny thumbs to prove how delusional he is about the election.

Joe’s going to have a hard job on his hands, now that Trump has made it okay for all the racists in the country to come out of the woodwork. Not only that, Hitler Junior killed thousands of Americans by not heeding the warnings of the previous administration about a possible global pandemic; he even made his people throw-out the actual book advising what to do in that case! And he made morons think it’s okay to mock the disabled. The list of his egregious transgressions goes on and on.

So, this past week-end, it became official—Joe Biden is our next President, and we can begin healing on January 21, 2021.

And that, ladies and gentlemen, is, of course, the Number One story of the week!