Trending
You are at:Home»TRIBUTE»TRIBUTE: ESTHER WILLIAMS
By Karen Salkin on June 7, 2013 · TRIBUTE

I knew Esther way back in the day, when I was just starting my career.  My first acting gig was directed by her husband, Fernando Lamas, whom I adored.  But I was much more excited to meet Esther!

She was even more darling as I had expected.  Actually, at that point in life, I never really had any pre-conceived notions about anyone. I was just so excited to see her in person, let alone meet her! And I was thrilled that I was being introduced by her husband, rather than just being a fan accosting her someplace. And her being as nice as she was was the icing on the cake. 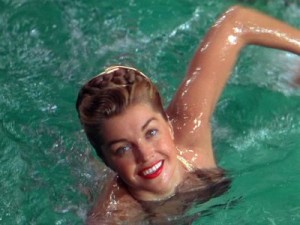 I told her how, when I was little, my parents would get me to take baths by letting me be “Esther Williams” in the tub! (I had a love of old movies even back then. And color ones were just a marvel!)

I also re-counted the story of how, when Mr. X and I had recently been living in Toronto while he starred in a musical there, and the people we contracted with for a condo for the summer had neglected to put in any furniture, thus stressing him to the max, I entertained him by putting on a one-piece suit (that I even owned one is a miracle,) and splashed around in the tub when he’d get home, reprising my “Esther Williams” routine for him, using a shiny belt as one of her fancy hair adornments! (A girl’s gotta improvise occasionally.)

She loved it, and offered to give me one of her old swimming headdresses the next time she saw me, which we both expected to be soon, since we were now both part of the same social group.

But, alas, Fernando got sick and passed away soon after, and I never saw her again.

Several years later, I had my chance again when I was invited to the L.A. party for her autobiography being published, but I was in New York at the time, so therefore couldn’t make it.  I’m still upset about missing it!

I always thought I’d see her again; sadly, I never did. But my memories of Esther Williams, both in life and in film, will always be warm ones.

She lived a full life, and one can only hope, a happy one. At least as happy as she made us, her admiring public.

RIP, Esther. I just hope that there’s a pool in heaven worthy of your spectacular-ness!!!