I hope that by now you’ve read the first two parts of my recent thirty-six hours in Vegas. If you missed them, and want to get caught-up, you can read my review of One Queensridge Place here: https://itsnotaboutme.tv/news/vegastravel-vegas-trip-part-i-one-queensridge-place, and my review of dinner at Cantina Laredo here: itsnotaboutme.tv/news/vegasdiningtravel-vegas-trip-part-ii-cantina-laredo.

But now we come to the juiciest part—the road trip! If you heard the Jaws music playing in the background just now, you’ve got it right.

I had taken another road trip to Vegas several years ago, with two blondes. So that might give you a clue as to what’s coming. They turned the basic, straight-shot drive, that should have taken four hours, into practically the movie Vanishing Point, (or some film like that,) with us on the road for eleven hours! And that wasn’t for any fun stops along the way, trust me! [Note: I’m still in touch with one of them, but hadn’t seen the other since that strange sojourn until…this past week-end! And the first thing she mentioned was that trip! She even acknowledged that they went wrong because they didn’t listen to me, so at least I have that.] 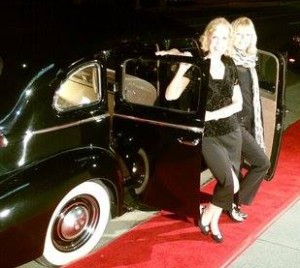 The two blondes I had done this trip with several years ago!!! If only it had also been in that gorgeous car!

That particular story requires an entire column unto itself, so I’ll tell it on a slow news day, but the reason I’m mentioning it now is this: just as I was about to tell Lauren this story, I noticed that she and I were on the wrong freeway! I absolutely could not believe it was happening again. But at least she would listen to me, and we corrected that mistake with losing only about twenty minutes of drive time.

But that was the last time she listened to me on directions. She decided that she had to use the idiotic “Siri” on her iPhone, who’s wrong more often than she’s right. So, guess what? Siri had us go on the wrong freeway into town, and exit at the wrong place, by about a mile. I knew something was amiss when she told us to park in the middle of nowhere and “walk to” our destination! In the middle of the desert!!! 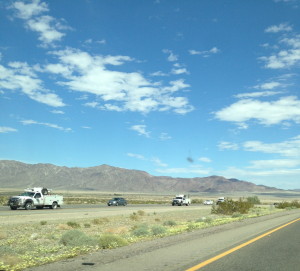 The majestic scenery on the road between Cali and Vegas. Photo by Karen Salkin.

I told Lauren to go to a gas station and ask someone, or let me go into the only building in the area, that we had pulled-up in front of, but she was insisting on listening to Siri, and trying to figure out the map on the phone. I called my friend Lori, who lives right near the condo we were headed for, and also the reps from the condos, both of whom know the directions to where they are, but Lauren would not listen to any of us. So, despite exiting the freeway in the wrong spot, we could have corrected it in ten minutes, but because of stupid Siri, (and my pal’s stubbornness,) we arrived at our destination forty-five minutes after we got off the freeway!

The trip took us an extra hour and a half! In no traffic!

The trip home was not quite as eventful, knock on wood. I know that Lauren is cellphone-obsessed, so rather than fight it on a long trip, I decided to not say anything if she had to talk business on the phone, and I brought a pillow and blanket to rest while she did so. Good thinking, eh? Not so fast.

I must commend her because she totally held herself back on the entire round-trip, and we just caught-up with each other, which is what people are supposed to do when they’re together. I never have phone time myself—I’m always living my adventures, or writing about them—so I talk to only the people I’m spending time with, as a rule.

I was so exhausted on the way home that I was actually hoping that Lauren would take some phone calls, so I could rest, so when an important business call came through that I knew she had to take, I told her that I was going to close my eyes while she talked, but she should make sure to look-out for the next freeway. 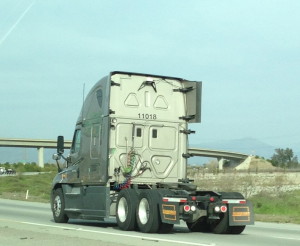 Can you guess why I took this picture? Give up? Because the truck looks like it has a happy face, of course! Photo by Karen Salkin.

Famous last words. About two minutes into her call, I heard her yell an expletive and say, “I just missed the 210!” I seriously could not believe it! But, thank goodness she at least noticed while it was happening, as opposed to that previous trip with the blondes, who just went about four hours out of our way while my eyes were closed for a few minutes. (By the way, Lauren is a blonde, too. A natural one!)

We just went to the next town to turn-around, and figured we might as well take bathroom breaks at the same time. Lauren went first while I stayed behind to guard the over-stuffed rental car. I told her to not return the key to the bathroom, and just bring it out to me because I was going next, and that I’d return the key to the clerk.

So when she walked towards me, texting all the way, of course, I asked for the key to the restroom, and she handed it to me, telling me that only the men’s room worked. So I went into the building, and as I approached the men’s room, I saw that it was already open, so I didn’t even need the key. When I came out, there was a guy waiting to go in, so I asked him if he wanted the key. He looked very confused and just shook his head no. So I went over to the guy behind the counter, to give him his restroom key back. He was helping someone else, so I just put it on the counter and told him I was “returning the key,” and started walking out.

I heard him say to the woman he was ringing-up that he didn’t know what that was! So I walked back over and asked, “Isn’t that the key to your restroom?” And he said he never saw it before! So I finally looked at it, and you’ll never guess what it was—the key to Lauren’s rental car! Do you see what texting does to one’s brain?!

But, after that, we made it back to Los Angeles without incident. And without running into traffic, either, until semi-close to my house! And we had left Vegas at around 2PM! That’s pretty amazing. Almost as amazing as the fact that we never even attempted to gamble during our entire twenty-four hours in Nevada! So, as Mr. X says, we went to Vegas and broke even. Maybe I should teach classes in how to do that. Or classes in Driving Directions…For Blondes!