Trending
You are at:Home»EVENTS»TRAVEL/EVENT: JUMP INTO IRELAND 2018
By Karen Salkin on November 19, 2018 · EVENTS, TRAVEL 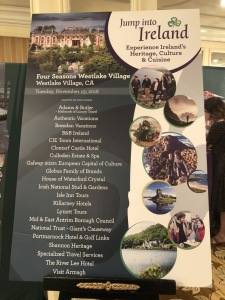 After sitting-out last year’s Jump Into Ireland fete, I was happy to return to it. I love that they often switch-up the venue, and this year held two surprises for us.

It was due to be held at the Four Seasons in Westlake Village, which is beautiful, but very hard for most local Angelenos to get to on a week night. And since I was also invited to several other events that same night, in locations much closer to me, I was a bit iffy on attending.

But, because of the horrendous fires in that area, the soiree had to be moved to the Beverly Wilshire Hotel, which was not only much more convenient for yours truly, but I’m sure for most attendees. And I have to laud that hotel for doing such a commendable job on that short notice. They really made it beautiful. 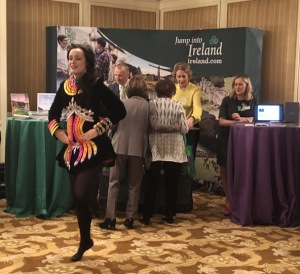 The first part of the evening was a cocktail mingle in a room at the top of the winding staircase in the banquet half of the hotel. It was on the floor where Mr. X had thrown my very extravagant thirtieth birthday party, so I loved that memory of climbing those stairs back then, not knowing of the surprise that awaited me. (And the shock of my celebration featuring not one, but three strippers that my talent manager had thought would be a good idea, before the shock of the second one, dressed as a cop, brought it all to a screeching halt!) 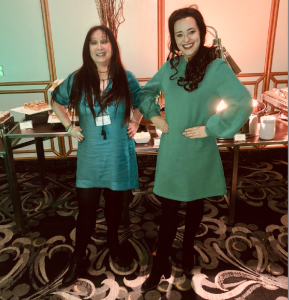 We mingled and met with the representatives of cities and hotels in Ireland. I keep waiting for this Tourism Ireland group to have a press junket so that I can finally visit them all! Especially the places that serve afternoon tea! Some of the reps plied me with images of theirs to whet my appetite, both literally and figuratively!

In addition to the passed appetizers and open bar, what really caught my attention were two attractions in that room. There was a duo playing lovely Irish music all night, along with Irish dancer Carrie Malloy. She has her own Irish dance school in town, so I may just go study up so I can join in the fun next year. (Funny sidebar: As I was getting dressed to go out that night, donning my kelly green dress, black tights, and flat ankle boots, I told Mr. X that I might be mistaken for the dancer. And after Carrie performed in a much fancier dress, she changed into—almost my exact same outfit!!! Even I didn’t know which one of us was the entertainer for the night!) 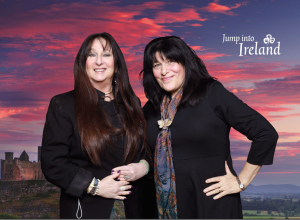 Karen Salkin and Roz Wolf. You can see part of Ireland on the bottom of Karen’s outfit, where her jacket opens, because she was wearing a green dress!

The other perk of that portion of the evening, which was new this year, was that we each got a photo of ourselves…in Ireland! Of course, it was taken against a green screen, so the background could be filled in with their stock photo. But I was wearing all green, so my pic looked like just a head, with a lot of hair, in the middle of the countryside! It looked pretty amusing, but we redid it with my jacket pulled shut. I’m just lucky that my five green eye shadows, and all my green jewelry, didn’t mess-up the picture any further. (But, in case you’re wondering, I made my nails purple this time, so I would totally match the green-and-purple canvas bags we always get at this fete.) 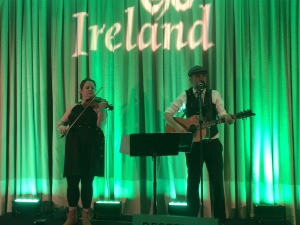 Then we moved downstairs to a different room, all bathed in green light. [Note: See the pic at the top of this page.] I right away knew what Dorothy felt like in the Emerald City! It was all so beautiful!

This is where they did the little Jump Into Ireland presentations, to demonstrate a bit of what the different areas are like.

When that was over, we moved on to the elegant, generous, sumptuous dinner buffet. The first part was the best salad bar I’ve ever come upon. There were three different types of deconstructed salads, which means they provided all the ingredients separately, so we could choose just the ones we like. They must have known that picky moi would be there! 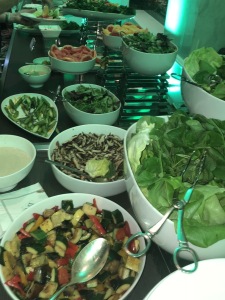 Part of the salad selections. Photo by Karen Salkin.

Then came the hot foods buffet, highlighted by sea bass and lamb chops, (neither of which I eat, but oh well. There were plenty of side dishes and desserts for me!)

All the while, we were serenaded by that strings duo again. My friend and I had such a good time that we were among the last to leave!

So, hopefully, I’ll make it to their rich green country before this time next year. And you’ll find me in one of their hotels feasting on afternoon tea!