Trending
You are at:Home»TRAVEL»TRAVEL: MY TRIP TO SAN FRANCISCO–PART I—MY REVIEW
By Karen Salkin on November 11, 2015 · TRAVEL

[Note: In this month of giving thanks, I want to tell you about a few days that I’m grateful to have had in July. To do the story justice, I need three days to tell it all, so I’ve been saving it until I had consecutive ones available for the saga. So, please make sure to come back for the next two parts. One will even feature my very first guest columnist!]

During the final week-end of this summer’s Wimbledon tennis tourney, (which ended so badly for me that I can’t even ever discuss it,) Mr. X and I spent a few days in San Francisco. 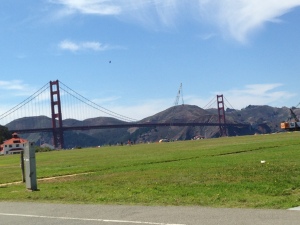 We were in town because he was doing a commercial there, (which ran for a long while after that. Yay!)  Even though he’s intense when he works, (and, actually, all the time—he’s Italian!,) he brought me along.  A lot of issues had been getting to me at that time, and, even though I had never before had a good time in that area, I really needed a little break from LA.  (I just realized—in all my years here in Los Angeles, the town that I adopted when I was just a teen-ager, I had never before stayed put for a whole year without a trip somewhere, usually New York.  At the point of my SF trip, I hadn’t left town for well over fourteen months!  Wow. I guess I was experiencing something akin to island fever.)

So, here are our reviews of that week-end.  I’ll leave out the part about the hotel and surroundings for now, and will bring you those deets in Part II, which contains—wait for it—a review from Mr. X himself!!!  For the first time ever in this e-zine!

And then the following column will be my reviews of the many places we dined at in those few days. 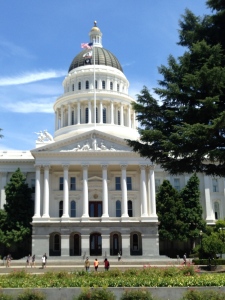 The California State Capitol in Sacramento. Photo by Karen Salkin.

But here now is my story of the good parts of that week-end! (But, weirdly, most of those were without Mr. X!  Read on to see why.):

We had to fly separately because of a glitch in his schedule.  But, as stressed as I was about getting there alone, (I’m a wimpy traveler,) it all worked-out.  My great friend, Curtis, took me to the airport, which sent me off in the right mood.  And even the airport wait was okay because I got to watch Roger Federer’s beautiful semi-final win over Andy Murray, on my iPad.  (But please never mention the subsequent Final to me, ever.)  I was seated in the first row of the plane, and an adorable teen-ager, Moses, sat in my row, and made the time fly.

Mr. X, who rarely goes out to eat (because he thinks sitting in a restaurant is a waste of time) had to go out to four meals there with me!  I loved it!  One was really good and three were pretty weak.  (You can read all about them in the upcoming Part III.) 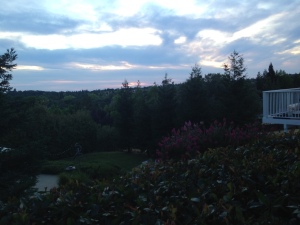 The beautiful sunset at the Zarkas gorgoeus home in Placerville. Photo by Karen Salkin.

And, even though the bed was half the size of the one we sleep in at home, and the hotel had no AC nor room service, (deets tomorrow,) we laughed the whole time we were together.  I don’t think we had even one fight there!  (I guess we were just too hot and uncomfortable to argue.  And we were united in our anger at others, mainly the situation, to be angry with each other.)

But this is why I had a beautiful time up north: It was because of Dave and Deb Zarka.

The experience made me think of some show business stupidity I saw many years ago.  For some unknown reason, Jerry Lewis was given a talk show.  On his very first show, he said this, that’s stuck with me for all these years: ”The best wish I could ever wish you is to have people in show business as friends.”  How shallow and weird.  But I thought of that statement recently when I realize that I now wish everyone (well, all good, deserving people,) a friend like the Zarkas!!!  When I tell people what they did for me, they’re all amazed. 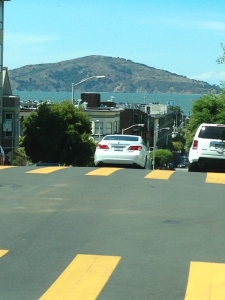 Here’s the quick backstory: I met Dave through mutual pals when neither of us had been in LA very long.  But he then moved up north and married Deb (with my major approval,) and, as life goes, we lost touch.  And then, just a year ago, Deb, thankfully, put us back in touch.  (Most wives I know make their husbands stop talking to me!  How dumb.  Deb is one in a million!)  Talking to Dave all the time is like having a wonderful brother.  But I couldn’t imagine when we would ever get to see each other again; they don’t come to LA, and I don’t go to San Fran.

But when Mr. X’s talent gave me this wonderful opportunity, I jumped right on it.  I called Dave, and asked, “How far are you guys from San Francisco?”  My big plans were crushed when he answered, “Over two hours!  I said, “Well, that’s the end of that.”  When I explained the situation, Dave said, without skipping a beat, “Of course I’ll go get you!!!”  For just a day!  He even planned to bring me back to their house for dinner, and then return me to the hotel that same night!!!  How unbelievably kind is that???  (I have that friend in New York, Lauren, who’s like that, too.  Believe me, I’m always a grateful girl.) 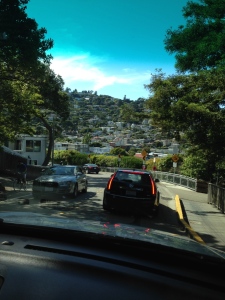 But Mr. X said I should stay over with them for that Saturday night; he was working on Sunday, anyway, and he didn’t want Dave to drive five hours round-trip in one day for me!  (Dave actually drove much more than that—because of the crazy traffic up there, especially on a week-end, it took him three and a half hours just to get to me!!!  OMG!  And people complain about LA traffic!)

So, Dave scooped me up in the afternoon, and it was like we had just seen each the week before!!!  And, trust me, it had been a couple of decades!  He drove me all around San Francisco to show me absolutely everything!  He even offered for us to get out and explore, which would have made his return trip that much longer, but I really do like to just see everything from a car. 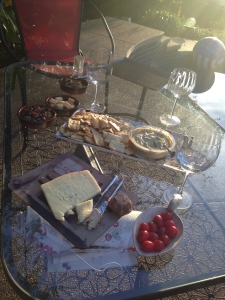 Then, because it had been the first place I had stayed in California all those years ago, he drove me around Sausalito!!!  What a trip (mentally) that was!  We even stopped at a roadside A&W, (because I hadn’t seen one since I was a teen,) which was a good memory, but awful burgers.

The best part was arriving at the Zarkas’ beautiful home in Placerville.  Deb had put out a spread of snacks that would be welcome at the finest resort!  We enjoyed them poolside, then took in the sunset from their many different decks.  OMG!  [Note: They share pix of the sunsets on Facebook many nights, so, to see one in person was special indeed.]

But that wasn’t it for the food!  Deb had made a delicious sumptuous dinner for us, as well.  We dined al fresco, on the lower deck, in candlelight. 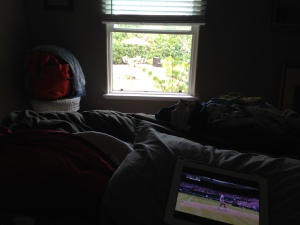 The view out my bedroom window. Notice the sad tennis on my iPad on my bed! Photo by Karen Salkin.

By the time we were done, it was 11:30PM!  Wow.  So that meant only thing—hot tub time!  We had so much to talk about, and there were so many stars to marvel over, that, by the time we entered the house, it was 2AM!

I took a shower and got into a cozy bed, and reflected on my great day.  I had only a few hours sleep when the beautiful sounds of nature wakened me.  (I slept with no AC and the window open, which I’ve never done in LA.  It was a revelation.) 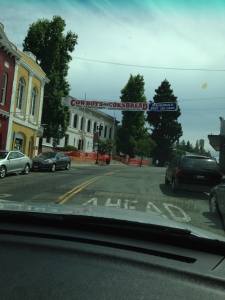 The cute town of Placerville. Photo by Karen Salkin.

I got ready, and joined Deb on the party patio while we waited for Dave to return from church.  And then, sadly, it was time to leave.

But, of course, not straight back to San Fran.  They showed me the adorable city of Placerville; I need a week there, not just a few hours!  We had breakfast at a cute little country eatery on the edge of town, (I’ll tell you all about it in Part III,) and then back to the car for more touring.

This time, they took me through Sacramento.  I had been there only once before, as part of a biker gang, (don’t ask,) in my first months on this coast.  Needless to say, this time was much more to my liking! 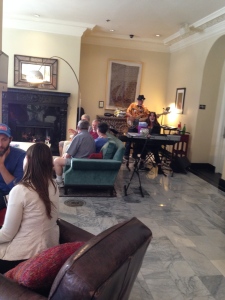 The cocktail party, complete with music duo, in my hotel lobby. Photo by Karen Salkin.

We arrived back at my hotel by 5PM, just in time for me to relax at the hotel’s nightly cocktail hour, complete with a music duo.  Having to then drive all that way back to their town, Dave and Deb couldn’t stay for it, but I was shockingly fine alone.  (And, I spent a bit of time there with my New Best Friend, Kate, the waitress from the previous day’s breakfast!)

And the best part was—the Zarkas weren’t sick of me yet!  (That they shared me with, anyway.)

When Mr. X finally got back from working, (at 9:30PM!,) we gathered-up his long-lost cousin Gus, (who, in a lovely coincidence, was acting in the same commercial!,) and went next door for late dinner, which turned-out to be surprisingly delicious.

And that was that!  We got back to LA the next day, refreshed and relaxed, and better able to face all the challenges that awaited me.

So, all the above is the good stuff that happened up north.  For Mr. X’s cynical take on the surroundings and experiences, please check-out tomorrow’s column.  I couldn’t have said any of it better myself!  (But you know that I’ll just have to weigh-in a bit, as well.)