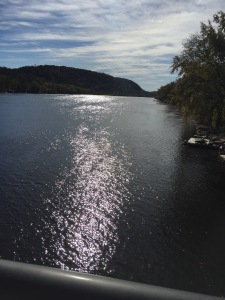 The awful election news this week may have dashed many of our “new hope” for this country, but at least we have New Hope, Pennsylvania! (And I’m proud to say that Bucks County, which New Hope is a part of, voted for Hillary Clinton. So now I can still feel welcome there!)

This review of my two days in that bucolic town may take you the whole week-end to read! But the info is oh so worth it, especially is you’re on the east coast, or plan to visit. (At breakfast at Porches, the lovely B&B we stayed at, I met a couple from my own Los Angeles; they had flown out to that locale just to see the foliage! More on all of that in a minute.) 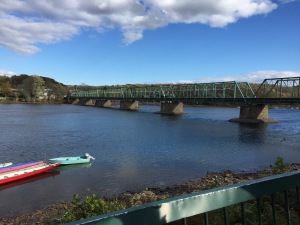 The bridge between New Hope, PA and Lambertville, NJ. Photo by Karen Salkin.

When I was a little girl, I so looked forward to my family’s summer trips to New Hope, PA.  (Our time there included Lambertville, New Jersey, which is just across the short bridge from Bucks County.) We stopped going when I was a middle teen-ager and Rhode Island came into our lives, but I did get to return once in my early twenties, with a pal. She and I went camping in nearby Upper Black Eddy with a group, and my deal in accepting her invitation was that she go with me into the town of New Hope. I loved it at that age, too. 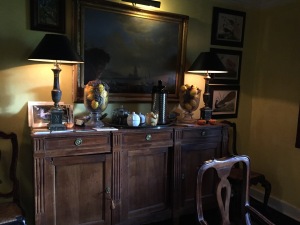 Part of the dining room at Porches. Photo by Karen Salkin.

So, here I am, a grown-up now, (well, that’s up for debate,) and just this year, I began thinking of that beautiful town again, when I saw someone post something about that region’s humongous shopping center, Peddler’s Village, on Facebook. I became determined to re-visit Bucks County on my very next East Coast jaunt. And my friend, Lauren, helped make it happen. I had never been there in any season outside of Summer, so to see the colorful trees in all their Autumn glory was a first-time treat for me (And Lauren had never been there, period!) 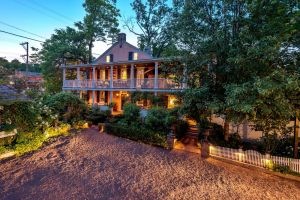 Porches on the Tow Path. Photo by Linda McManus.

We stayed at a charming bed-and-breakfast right in town. Porches on the Tow Path was the perfect place for our New Hope stay. Hosts John and Bob made our time there so easy, on every level. They were a dream to work with. Porches had been recommended to me by Fred Deni, a person whose opinion I totally respect, especially in food and that area of the country. Fred is the owner of two of my favorite eateries in LA, Back On The Beach and Back On Broadway, and he grew-up in Lambertville. He still goes there a lot, so, when he gives the thumbs-up to someplace in that town, I heed his advice. 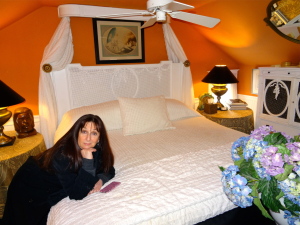 Karen Salkin, pondering if that’s the Porches room she should chose for the night. Photo by Lauren Bennett, as is the big one at the top of the page, which is of the view of the tow path from Porches.

As soon as Lauren and I arrived, Bob (who’s now my New Best Friend,) gave us a tour of all the unique rooms. (We were there mid-week, so we were able to see several of the rooms, without intruding on guests. But, shockingly, Porches was pretty full on what my little mother would have called “a plain little Tuesday!”) I’m glad they had prepared a room for us already because we would not have been able to decide from amongst all the unique lodgings.

Our place was a separate edifice, as some of the bigger ones are. It had two giant beds, which looked like they were out of a Dickens tale. They were so tall that I jokingly asked Bob, “Where’s the step stool to help me get up to my bed?” And he answered, “Oh, it’s in the closet.” I was floored. I didn’t really need it, but it was fun to know that it was there, just in case. 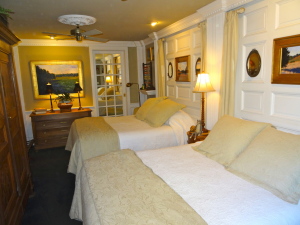 And let me tell you, it was perhaps the most comfortable bed I’ve ever slept in! I took a pre-dinner nap with no trouble whatsoever—I fell right asleep, which is rare for me.

And our shower was big enough for a party! (I have a feeling that’s against the rules, though.) I never saw one so huge in my entire life! Lauren was happy that we each had our own sink because I like to spread out my toiletries. (Along with the rest of my belongings. They don’t call me “The Human Tornado” for nothing!) We also had a table and chairs, a huge closet, and our own charming patio. 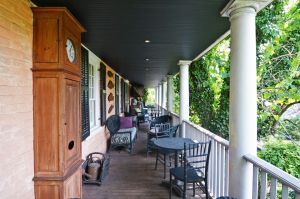 All that made us want to spend the whole time in our room! But that would have been crazy. And, even though the guys offered to bring us breakfast in bed, (which is a service for at least the separate cabin-dwellers,) we chose to go into the group dining room the next morning. (In the Spring, you also have the option of having it served—where else?—on their signature wrap-around porch! How special!) 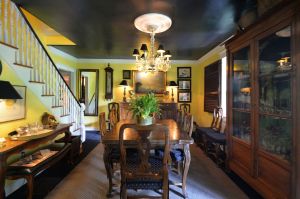 I expected just a continental breakfast on a sideboard, so I was happily surprised when I entered the dining room and saw the table full of guests having full-on, hot, fresh fare! Bob asked what I wanted, because he cooks everything specially for each guest. What a luxury, especially for me, who always has just a bowl of cold cereal in the morning. 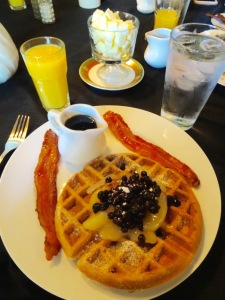 Bob made me a gorgeous, delicious waffle with a generous helping of fruit compote on top. I also cheated on my no-bacon diet, and had several slices of it, cooked to perfection. And, darling server Sean kept pouring all of us freshly-squeezed orange juice all morning. They even accommodated Lauren’s need for non-instant decaf coffee!

But, I’m getting ahead of my linear self. That was the next morning. We spent the first afternoon exploring the town, which we didn’t even need to drive to. We just walked a couple of steps down the alley from Porches, and voila—we were right on Main Street!

The highlight of that afternoon was finding the ice cream of the now-defunct staple of my childhood, Goodnoe’s Dairy Farm, right in town! The Goodnoes still make ice cream, and they sell it at an adorable candy store on a side street. Yu-um! 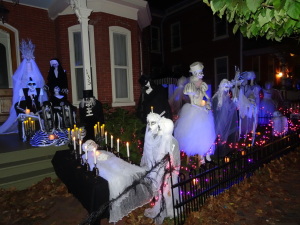 At night, John from Porches suggested we take a look at the incredible Halloween displays on Union Street across the bridge in Lambertville. So, after a nap and some work, we took his advice, and were overwhelmed by how extensive the decorations on one of the houses was. (You can read about it in my Halloween column, here: itsnotaboutme.tv/news/holiday-happy-halloween-2016.) 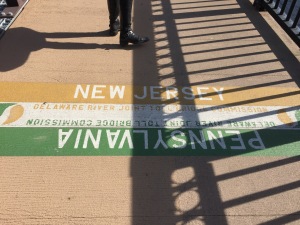 The state divide, as noted on the Lambertville Bridge. Photo by Karen Salkin.

When we got back to the New Hope side, Lauren wanted to dine on the giant patio of a restaurant that has been there since 1727! (This whole town is historic, actually.) Our adorable waitress, Rachel, mentioned that a psychic dinner was going on in their big dining room. I told her the story of something that happened to me shortly after my mother died, and Rachel started crying, and had to go back inside. (In case you’re curious about it, that amazing little tale is in the lower part of this column: itsnotaboutme.tv/news/holiday-happy-valentines-day-2.) When she came back out, she told us that the psychic, Ed Tabbitas, wanted to meet us. So, she took us in, and introduced us.

He invited us in to his portion of that event that night, (dinner was over, but so was ours, so we were fine on that count,) and we watched as he gave guests messages from their departed loved ones. There was only one non-believer among them, but he was far-outnumbered by the others, some of whom were in tears! 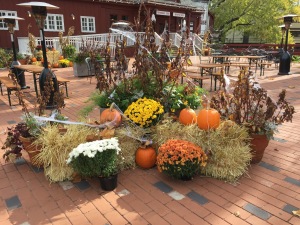 The grounds of Bucks County Playhouse. Photo by Karen Salkin.

So, the next morning, after Lauren and I walked across the bridge to peruse the charming shops of Lambertville, we returned to the inn for a cup of tea with Ed. It was nice to spend some one-on-one (well, two-on-one, in this case) time with him. He told me that my (deceased) mother said she liked my cute Halloween nails. I have no doubt that message did come straight from her! [Note: I don’t have any pix of Ed because we did not want to disturb his mojo.] 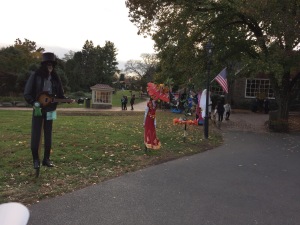 Just a small portion of the Halloween Scarecrow dispaly at Peddler’s Village. Photo by Karen Salkin.

After that, we took a few minutes to walk across the street to check-out my beloved Bucks County Playhouse. It had changed from the rustic little shack of my youth, but was still lovely. I was thrilled that the waterfall was still in play. I only hope that next trip, we’ll have time to see whatever show is playing there then.

After a quick stop back at Porches to thank John and Bob, (and to retrieve Lauren’s precious toque that she had dropped at breakfast, and the guys chivalrously rescued for her,) we were off to Peddler’s Village. Let me tell you—that place has grown so much since I was a kid, we need to spend an entire day and night exploring it alone! It’s massive now!

We had an incredibly delicious lunch there, with fabulous waitress Aviva, then shopped, shopped, and shopped some more! They have a year-round Christmas store that is just gorgeous! I could live in there! 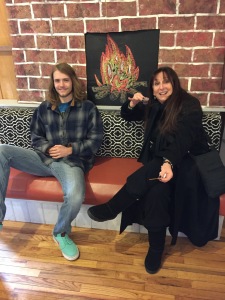 Our funniest experience was in a tea shop. But don’t get excited; they don’t serve afternoon tea—it’s just a store. But there were tiny sample cups off to one side of the room, and a space with couches, featuring a wall-hanging of a fireplace. I told Spicoli, (the name I kept calling Dan, the adorable young guys who works there,) to sit with me, and pretend we’re having a proper tea. We were laughing so much, I’m sure he thought I was high. I was—on the experience of being back in Bucks County for the first time in decades!!!

I loved this visit so much that I hope to pay a return one to New Hope again very soon.  There’s so much more to explore there!  And you know we’ll be staying at Porches on the Tow Path again!