I’ve attended the Los Angeles Tourism Ireland dinners and luncheons for the past several years, and I love that they do it so differently every year. The nescients would assume that each go-round would be in an Irish pub, with corned beef and cabbage and potatoes as the fare, but those people would be very wrong. 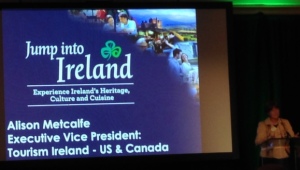 This time it was a classy dinner at the Beverly Hilton Hotel. It was a perfect venue for all that the organizers had going on with their “Jump Into Ireland” presentation.

We began with a true cocktail hour featuring several varieties of passed hors d’oeuvres, including beef croquettes, which were my absolute favorite. I could’ve eaten just fifty of those, and jigged all the way home.

Can you see that all my eye make-up is green? Selfie by Karen Salkin.

I love that many guests made an effort to wear green. But, even if I do say so myself, my guest and I would have won the award, if there had been one. (I think they should institute one next year!) Alice wore a green paisley dress with a—drumroll, please—green coat! I had on a new green and black top, four different green bracelets, a green necklace, shamrock earrings, green nails, and–get ready for it–all green eye make-up!!! (I forgot to bring my green glasses, though. Darn. Now I have something new all ready for next year’s fete!) 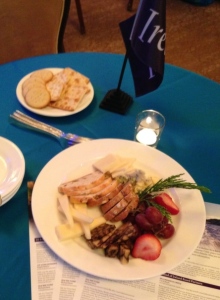 Each individual table had this cheese and crackers platter on it, not to mention a little Irish flag. Photo by Karen Salkin.

Then we moved into the Wilshire Ballroom, to listen to much interesting information on everything the Emerald Isle has to offer. The organizers were smart; on each table for four was a cheese and crackers platter, so no one’s stomach would growl during the presentation. Very classy. And appreciated!

After an hour and a half of telling us about so many areas of Ireland, (the telling of which included some live river-dancing, a little golf competition, and beautiful visuals,) we moved on to the sumptuous buffet. It featured grilled salmon, mashed potatoes with kale, sautéed parsnips, lox with all the trimmings, and of course, corned beef. And it was all absolutely delicious.

While they did a couple of raffles, we enjoyed the dessert buffet, which was made-up of creative and delicious bite-sized pastries. 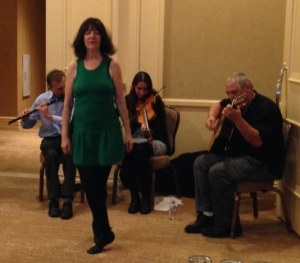 This Irish music and dance group entertained during both the cocktail hour and the dinner. Photo by Karen Salkin.

We learned some interesting things throughout the evening. First was a bit of trivia that even I didn’t know: the real Titanic ship was built in Ireland! (If any of you really knew that tidbit before I just told you, please let me know in the Comments section below. But only if you really did know that.)

The best info was that Los Angeles will have non-stop service to Dublin beginning in June of next year, on Ethiopian Airlines. I hope I’ll be on one of those flights!!!