Trending
You are at:Home»MUSIC»THEATRE/MUSIC: A NIGHT WITH JANIS JOPLIN
By Karen Salkin on July 24, 2015 · MUSIC, THEATRE

A NIGHT WITH JANIS JOPLIN

When I originally reviewed A Night With Janis Joplin two years ago, in the show’s previous run at the Pasadena Playhouse, I declared that star Mary Bridget Davies deserved an Ovation award for her star-making role. Well, she did much better than that; she received a Tony nomination for it!

(If you want to read my original glowing review, without searching for it on your own, just click here: itsnotaboutme.tv/news/theatre-one-night-with-janis-joplin. I can’t improve upon that one too much; I will, however, give you some new insights.) 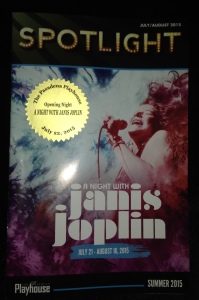 All you really need to know about the show is that Tony-nominated Mary Bridget Davies has still got it.  Her performance, of Ball and Chain especially, is outrageous!  That one song is worth the price of admission alone.  (The other two highlights of the show, for me, are Sharon Catherine Brown singing Today I Sing The Blues in the first act, and “Janis” doing Cry Baby in the second.) By the middle of the second act, the main thought in my head was, “This chick is woooorking it, man!!!”

Obviously, (for those of you not in the know,) this show is about iconic blues/rock/-soul singer, Janis Joplin. Sort-of. It’s more of a concert with a few biographical anecdotes along the way. But even if you know nothing of Janis, (which means you’re very young,) or don’t care about her, you should go see this show for the fabulous music. I swear, I was never into Janis, but these live singers and musicians (especially the horn section) truly got to me.

And I really enjoyed the light-show on the giant screen in the background. It’s what I imagine her performances at New York’s Fillmore East to be like. The only thing missing was the weed.

A Night With Janis Joplin is a little bit different from the first time that it was performed at the Pasadena Playhouse two and half years ago, but it has the same essence. So, for those who have never seen it before, just take this version on its own merits. And, if you are familiar with it, and want to compare the two renditions, that’s fine, too. It’s basically all the same, with subtle differences, that neither greatly improve the show nor drastically detract from all the positives. It’s pretty much just a matter of taste. (I don’t know why they made any changes at all, actually, except for the one I’m about to mention in the next paragraph, which I totally applaud.) 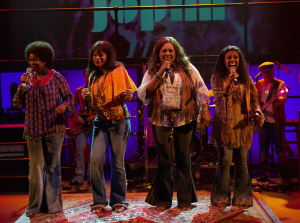 I think I liked the other staging just a tad more, but the new way of presenting the historic soul singers who came before, and greatly influenced, Janis is sooo much better this time. In the last incarnation, there was just one woman portraying all those greats, like Aretha, Bessie Smith, and Nina Simone. In this one, four actresses share the duties, with much better results, to my mind, anyway. For example, I Shall Be Released, one of my all-time favorite songs, is much more powerful now as a quartet than it was as a solo.

And, I don’t know if it was just my imagination, but these musicians, especially the guitarists, seem to be featured a little more prominently, which is great.

The previous set design, though, was a bit more opulent, with rugs and lamps all over, but this one is fine. Nothing extra is needed.

The one thing that really bothered me is the shiny gold bottoms of Janis’ pants; they’re a little distracting. I know what the costume designer was going for, but if she felt the velvet bell bottoms needed a little somethin’ somethin’ towards the feet, the embellishments should have been in dark purple or some such color, rather than the too eye-catching gold.

Conversely, the black-and-white pictures of Janis’ childhood, which are shown on the big screen behind her towards the end of the second half, are very interesting and heart-warming. 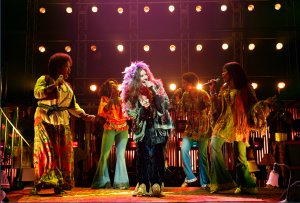 Speaking of Act II, I enjoyed it much more than Act I because it’s basically just a concert of Janis’ main hits. I didn’t miss all the “chatty” parts of the first half. The one little bit of chatter in the show that I did enjoy was discovering that Janis Joplin was a fellow Capricorn! Good to know. I would have loved her in person because, even if I do say so myself, we Caps are the most fun. (Maybe I should have checked that premise out with her family members whom I met on opening night, to see if they agree.)

I absolutely love that the show is closed with Mercedes Benz because it was actually the last recording Janis completed, on October 1, 1970. Very appropriate. (And appreciated, by at least me.)

I realized during the production that I could do a similar biography performance show because Mr. X always says that I don’t sing—I “sing as.”   (Meaning I can’t even carry a tune normally, but if I do Bye Bye Birdie as Ann-Margaret, or Take Back Your Mink as Vivian Blaine, I can do it!)  But I could not do the Janis Joplin show because I’m too shallow to be seen in frizzy hair eight times a week! (As Mr. X would point-out, yeah—that’s the reason that I couldn’t do it.) 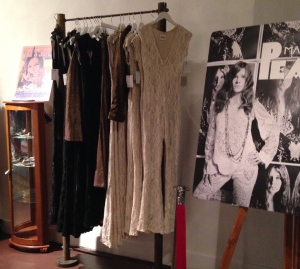 Part of the Made For Pearl on-site boutique. Photo by Karen Salkin.

As I noted in my previous review (again, link at the top of this one,) it has to be murder on one’s vocal cords to sign like Janis all the time. So, Kacee Clanton will be playing Joplin at two performances a week for the run. I met her on opening night, and I’m planning to go back to the Playhouse to see her work, so please keep an eye out for my tweet (@MajorCelebrity) with that quick review.

Now for more opening night fun!   You know by now that I always love seeing what the courtyard’s attached little “museum” has to offer, either before a Playhouse show or at intermission.  This time, there was a very special display in there.  For the duration of the run, it’s a boutique for the clothing line, Made For Pearl, which is designed by Janis Joplin’s pretty niece, Malyn Joplin, and is based on Janis’ famous hippie attire.  It’s all so great-looking!  And Malyn herself, along with her dad, Michael, (Janis’ little bro,) were on hand to meet and greet everyone.  I got to spend some time with them, and they were incredibly normal.  Lovely peeps. 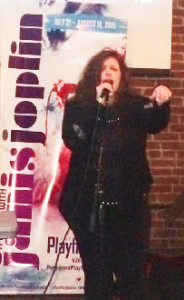 As a bonus of the evening, I was thrilled to bump into my old pal, Olympic figure skater Tai Babilonia, on the way into the theatre.  She’s as adorable as always.  And I also spied Melissa Manchester at the after-party.

Speaking of that soiree, it was so fun! It was held at a secret-ish bar, T. Boyle’s Tavern, (in an alleyway in a pretty residential section,) which the Pasadena “in” crowd seem to know about, but it was new to me. I loved its “Joe sent me” kind-of vibe. The very generous Mexican buffet was uber-delicious, and featured everything one could want in a make-you-own-soft-tacos bar. The high-top tables and chairs were surprisingly comfortable, and the karaoke stage was perfect for an assemblage of so many talented singers!  Even Mary Bridget Davis took a turn, (until Sheldon Epps, the theatre’s Artistic Director, comedically signaled his star to come down off the stage and save her vocal cords for the show!)

My party highlight, (yes–shockingly even more than the food,) was hanging with one of the producers’ teen-age sons, Craig, who talked sports, travel, and computer editing(!) with me. That’s one special kid. He even made like he believed me when I said we were the same age! That was better music to my ears than even Me and Bobby McGee!