If my fellow Angelenos are looking for something fun to do this week-end, look no further than this Broadway musical at the Redondo Beach Performing Arts Center. (And if you miss it there, no worries—it’s moving to Cerritos shortly after that.) 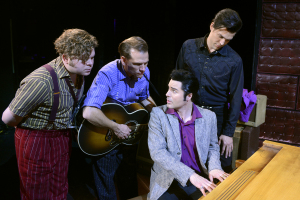 Photo by Caught in the Moment Photography, as is the big one at the top of the page.

Million Dollar Quartet is the dramatization of a historic, real-life event. On December 4, 1956, Carl Perkins was recording at Sun Studios in Memphis, Tennessee. A young Jerry Lee Lewis was backing him up on piano, and Johnny Cash and Elvis Presley just happened to stop by. What ensued that day was an impromptu jam session that was, very brilliantly, recorded by label head Sam Phillips. (Actually, his engineer, Jack Clement, was the genius who did it, but he’s not depicted in this show.)

So a few years ago, that story was turned into a musical. And how easy that was to do—no new music was needed, no choreography, not a big cast, and music that’s already beloved by so many Americans. It was a no-brainer. 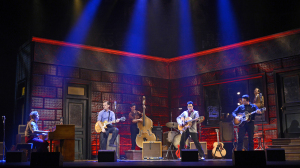 And now 3D Theatricals, a fabulous professional Broadway-quality company right here in our own backyard, has brought it to us Southern Californians. And, judging by the enthusiastic reaction of the opening night audience, we are lucky to have this opportunity.

I have to be honest and say that I had a very hard time deciding if I should leave my obsessive Olympics-watching to see this show, but I admire musicians almost as much as athletes (because they’re both magicians, in my book,) so off I went.

Rock and roll is far from my type of music, (I’m strictly a hip-hop and R&B girl,) but I appreciated the peek at history. Million Dollar Quartet is interesting and the audience loved it. 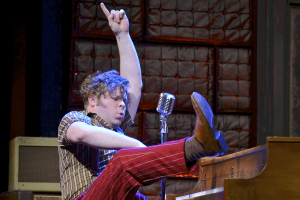 John Countryman. Photo by Caught in the Moment Photography.

My extensive research showed me that a lot of the action in the show is true to life, but some of it is—how shall I put it–imagined. But not many people are as stickler-esque as I am, so I doubt that any of the liberties taken with the truth will bother anybody else. I had only one small problem with this actual production, but the rest of the few things that annoyed me about the story are with the writing of the original show, and not at all with this particular production.

So let’s go to the positives first. First and foremost, this is a very talented cast, which I always appreciate. They were extremely lucky to get John Countryman, the guy who plays Jerry Lee Lewis. He plays a mean piano and he has a lot of personality, as Jerry did back in the day. Perfect casting. 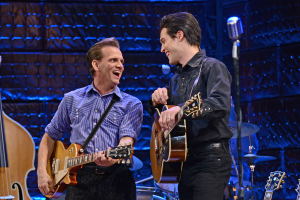 Michael Monroe Goodman and David Elkins. Photo by Caught in the Moment Photography.

And David Elkins does a great Johnny Cash, though I doubt that Johnny was ever as cute as this guy! I had to keep squinting to be able to see David’s face as grizzled old Cash. And the actor who calls himself just “Cole” does a good Elvis. (But you know that I consider it totally pretentious to go by just one name, so I did find myself thinking about that during his numbers.)

Michael Monroe Goodman, as the obscure-compared-to-the-other-three Carl Perkins, is the best musician of the quartet, and I could have listened to just his guitar all night. 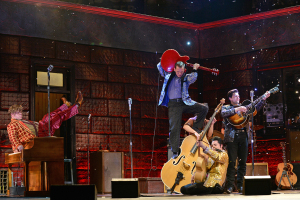 Actually, all the live music, played by these four and two other excellent on-stage musicians, is great. And they do a surprise mini-concert after the curtain call, complete with outfit change and encore ploy, which had the entire assemblage exiting the theatre in great moods, which is always a huge plus.

The one weakness with this 3D Theatrical show is Adrienne Visnic, playing a fictional version of the one female who was around that day. This company usually has fabulous female singers, so I don’t know why they couldn’t find someone better to sing these couple of songs. It was surprising. The woman sitting next to me in the audience sang better than Adrienne, even though she was annoying to be doing so!

Now here are my problems with the original show, which 3D always follows, right down to the costumes, as the producer, T.J. Dawson, announces at the start. But the lone female’s wardrobe was so wrong, I could not get over it! They had her in a very naked dress, which I can’t imagine that girls wore in the ’50s unless they were ladies-of-the-evening. 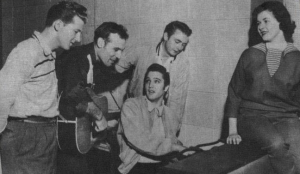 The original four, with Elvis’ gal pal on the piano.

As a matter of fact, the real girl wore baggy pants and a bundled-up long-sleeved top. So the only reason for the female cast member to be dressed like this is because the powers-that-be at the original show were sexist.  In these days of the “Time’s Up” movement, this is sort-of offensive. (Who designed the costumes–Harvey Weinstein?) I’m not a big feminist, but when they make the effort to dress the males correctly for the era, they should have done the same for the woman. (By the way, I know what this wardrobe should be because I did a movie that took place in the ’50s, and every single item that they outfitted us from was definitely far from this nakedness.)

As far as the writing goes, I didn’t get the action or purpose of the real-life event from what I was seeing, so I had to look it up. But back on the positive side, I highly doubt that audiences are seeing Million Dollar Quartet for the story. The music is, for sure, the thing. 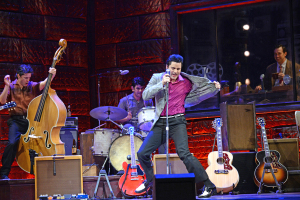 One other confusing aspect of this production is that T.J. announced that they were all playing their instrument, which I would have assumed that everyone could tell to begin with. But on a few of the numbers, I realized that the actors who played Elvis and Johnny weren’t moving their fingers on the frets of their guitars, so they appeared to be just strumming, which took a lot of my attention to try to figure out. So, I’d love to know what is up with that.

But I really enjoyed learning about these icons of music. I wasn’t very familiar with Carl Perkins, except that I think I had associated him with Blue Suede Shoes for some reason. (I researched it after I saw this show and found-out that not only did he record that song before Elvis, he wrote it!) But I had no idea what he looked like. And I knew only the older versions of the other three: drug-addict Elvis, jailbird Johnny, and child-marrier Jerry.

The entire shindig is just one under-two-hours act, and you might even be begging for more when it’s over.

So, I highly recommend seeing Million Dollar Quartet at either venue while you have the chance. And yes—even if you have to stop watching the Olympics for a few hours to do so!