As if theatre fans in Los Angeles weren’t already excited enough that Matilda, The Musical, is coming to the Ahmanson next year, the theatre held a special preview event for a select group of fans a few weeks ago. 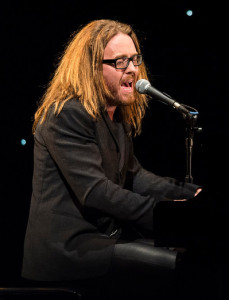 Composer/lyricist Tim Minchin entertaining the crowd with a song from Matilda. Photo by Craig Schwartz.

I was shocked that so many of them, including children, seemed to already be familiar with the show! The audience was going wild from the second the presentation began! (I know it’s a famous book by Roald Dahl, and then became a movie about a decade ago, but I never think of children in L.A. being that cultured to know of Broadway shows that haven’t even played here yet. I’m thrilled that I was finally incorrect about something!)

Before all that, though, I was lucky enough to be invited into the theatre’s Founders Room to meet with the show’s composer/lyricist, Tim Minchin, an Aussie known for his musical stand-up comedy routines. (For the behind-the-scenes story of what can only be described as my in-depth questions, check-out my latest YouTube vid here: www.youtube.com/watch?v=zkLxnlEAT2c.)

Tim described Matilda as “quirky, pretty quirky,” which is also how one might describe Tim himself! (Look-up some of his vids, and you’ll see what I mean. He’s a trip.)

Our chat was pretty educational about musical theatre. I’ll let you in on some highlights here, and then save the rest to tell you about when the show opens next year. My fave is that he shared that his young son’s impending birth made him finish writing Matilda; he wrote the whole show in six weeks, so he’d have time to be ready for his son’s birth! I love that one! 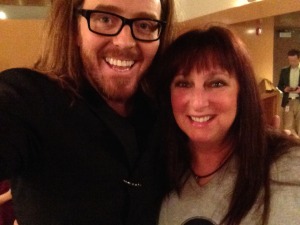 Tim Minchin and Karen Salkin.( I rarely publish pix of me, but when I went to take one of just Tim, he grabbed the camera away, and made it a selfie! Fun.) Photo by…Tim Minchin!!!

Tim explained about writing lyrics, saying that “lyrical phrases should follow speech patterns,” which means that one one should compose “so you’re not singing against speech patterns.” I never would have thought of that. And I was pretty surprised when he told me that, “I understand music; I just don’t read it or write it.” So, it’s even more impressive that he’s accomplished all that he has.

But I was most struck by how very kind he was to the two children who accompanied their moms to the private press sesh. I immediately understood why children would respond so well to his writing. That went along with something he said about the writer about the original book upon which the musical is based. He said of Roald Dahl, “What Dahl did was [that he] never condescended to children.” And, “Dahl’s whole point was that kids can do anything.” How lucky his own children are to have him as their dad!

One of my bon mots that didn’t make it onto the above YouTube video is this: I told Tim that I had erroneously thought that Matilda was about kangaroos, and I didn’t know why. Then I realized it was because of the Aussie “unofficial national anthem,” Waltzing Matilda!!! (The song has nothing to do with kangaroos, by the way. I think I’m just nuts when it come to Australia. A “matilda” is a bag! But my thinking went something like this: “Matilda—Waltzing Matilda—Australia—kangaroos—musical about kangaroos!” You understand, don’t you?) Then Tim told me that he’s actually currently writing a musical about kangaroos! I don’t know if that’s true or if he just didn’t want me to feel like an idiot. (I have a feeling he now knows that it takes a lot more than that to make me feel that way, though.) 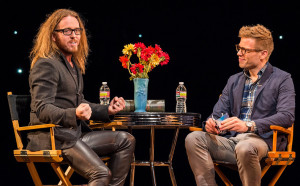 Tim MInchin being interviewed on stage by Barrett Foa.

I was thrilled to find-out that what’s next for Tim Minchin is composing a musical of one of Mr. X’s favorite movies, Groundhog Day! Although to me, performing the same words and scenes over and over again on Broadway every night would seem like Groundhog Day!

After that enlightening private portion of the evening, a few of us got to chill in the theatres’ green room. One would think with that all the green rooms I’ve occupied in my career, a new one would be no big deal, but this one really was. I thoroughly enjoyed my time spent in there.

We finally moved into the auditorium for the presentation, which was hosted by a guy named Barrett Foa, who did an admirable job of keeping us entertained and moving the proceedings along. First, he did his own interview with Tim, (with not one mention of vegemite!,) before Tim sat down at the piano, and played and sang us one of his songs from the musical. (He performed it with gusto, by the way. A lot for the little actresses to live up to, which I understand they all do.) 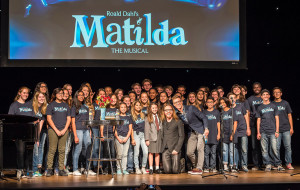 The whole group from the presentation. Photo by Craig Schwartz.

Then Bailey Ryon, a former Broadway “Matilda,” beautifully sang a solo from the show. She was later joined by a chorus of talented youngsters from The Colburn Community School of Performing Arts, right here in Los Angeles.

But the best part of the whole shebang for me, (because I cherish my readers so much—I mean it!,) is being able to share something tangible with you guys: a way for you to be able to buy early tickets to Matilda, The Musical, before they officially go on sale on December 2. Just use this link: CenterTheatreGroup.org/COMPOSER. And say “Karen sent me!” (I’m only kidding about that last part.)