Trending
You are at:Home»CHARITY»THEATRE/CHARITY/EVENT: ONE STARRY NIGHT…FROM BROADWAY TO HOLLYWOOD
By Karen Salkin on April 24, 2015 · CHARITY, EVENTS, THEATRE

ONE STARRY NIGHT…FROM BROADWAY TO HOLLYWOOD

If you weren’t at the Pasadena Playhouse on Monday night, you really missed-out. Big-time! I brought my friend, Maria, to The ALS Association Golden West Chapter’s One Starry Night…From Broadway To Hollywood, and she said it was the best event ever! And this despite the fact that she had sat in floor seats for the Clippers play-off win over the Spurs the night before! Even being an Angeleno, she said that this show was beyond so much better than that major sports event! How’s that for an endorsement?! 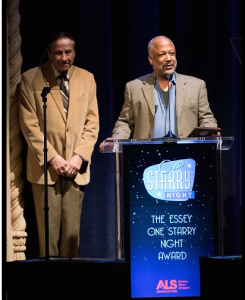 Nothing I can write about this marvelous evening is going to come even close to portraying the magic that was in the theatre that night. You know I go to fundraisers all the time, but none has ever topped this one! As Maria put it, “What a successful event!”

It was the kind of night that you can’t sleep after, for oh so many reasons. You know the feeling when you have a big, successful birthday party that everyone loved, or went to see Prince, and was backstage after the show? And then you come home and get into bed, but you can’t sleep because your mind is going a million miles an hour reliving it all? That’s what One Starry Night was like! Every aspect of the evening was wonderful. (Except, of course, that we all wish there was a cure for ALS, so we wouldn’t be there in the first place. But my mind was even racing about that topic.) 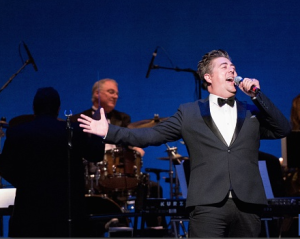 I’ll tell you all about the proceedings in one second, but first I must discuss the reason we were all there to begin with, which is to raise funds for, and awareness of, the awful motor neuron disease, ALS (which is often referred to as “Lou Gehrig’s Disease.”) (If you missed my preview of this night, where I explain ALS a bit, and you’d like to know more, here’s the link, so I don’t repeat myself if you’ve already read it: itsnotaboutme.tv/news/upcoming-eventcharitytheatre-one-starry-night-preview.) Many of you may be aware of it from last summer’s widespread “Ice Bucket Challenge,” though you may not even know why people were doing it. And it was often portrayed the wrong way.

The idea was that you had to donate to the ALS Foundation, to fund much-needed research on how to cure, or ease, the affliction, and if you didn’t donate, you had to pour a bucket of ice water over your head. So, whenever we saw videos of people doing the ice thing, that should have meant they did not donate! So, I think the whole thing got misconstrued. At first, many celebs said they donated instead, which was the point, but then no one would have seen those videos, which definitely helped raise awareness of ALS. So, people started doing both. I hope. It helped no one if the participants just got wet, without also sending the bucks! 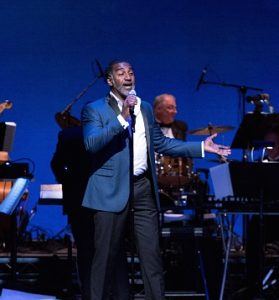 No matter; it did bring the cause publicity, which is always good.

So, now, back to this beautifully-produced evening, One Starry Night.

I cannot rave about this show enough!!! I was bowled over by the talent itself, and the amount of it! It was truly amazing. Plus, the pace of the show, and variety of acts, was spot-on. Even though the next segment of the night was a dessert reception, (more on that soon,) we actually didn’t want the show to end! The producers managed to do the best thing in show business—they left us wanting more. 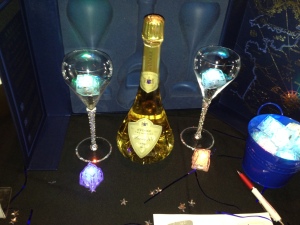 One of the silent auction items. I was having such a good time that I forgot to take any pictures of the food!!! Photo by Karen Salkin, (as is the big one at the top.)

But you know that my linear-thinking mind has to go in order. As we arrived and checked-in, we had so many choices of beginning activities! Many chose to stay out in the courtyard, and watch the celebrities and other performers arrive. Most of us went into the adjacent restaurant, redwhite+bluezz, for the pre-show reception. That’s where the silent auction was, and I could not tear Maria away from it! She went crazy, and bid on almost everything! The items were that good.

Some guests just mingled in the bar area, where the big-screen TVs were featuring an NBA play-off game, and one Yankees game, (so guess where I stayed?,) while others lined-up for the delicious buffet of salads and a carving station. Very patient servers also passed sliders, crab cakes, fries with sauce, and my fave—fried chicken sticks. Yum-my!

After the perfect amount of time, we moved into the theatre for one of the most delightful evenings I’ve ever experienced in there!

One Starry Night…From Broadway To Hollywood, was a true variety show. It was mainly singers, all of whom had stunning Broadway voices and chops, (and credits, hence the title of the production,) but there was also a dramatic reading by Ed Asner and George Newbern, comedy, magic, a couple of tap dance numbers, (one of which opened the show, which set just the right tone,) and a few awards presented by celebrities. 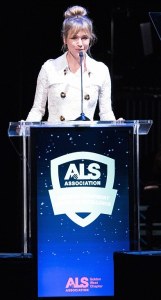 Renee Zellweger at the podium. Photo by Earl Gibson for The ALS Association Golden West Chapter.

Chief among those presentations was one by Renee Zellweger to the doctors at Cedars-Sinai. I was impressed with what she had to say, and the sincerity of her words. She shared, “As a person who loves someone who is living with ALS, I’m happy to be here among so many of you who understand what that diagnosis means.” And added, “We’ve learned that living with ALS does not mean being defined by the disease.” She was referring to her long-time publicist, and dear friend, Nanci Ryder, who was diagnosed with ALS last year. From what I understand from mutual pals, Renee has been in the trenches with her since the beginning. On a personal note, Nanci was on my management team when I first began acting, and we became good pals back then. We shared many experiences and laughs, mainly over boys. And dogs. I haven’t seen her in a long while, but when her business partner told me the devastating news, that’s when I started researching ALS, to see if there’s anything I could do to help. I hate that someone I knew so well is going through this, and Nanci is just the tip of the iceberg. So many are afflicted with it.

So, let me bring the room back up, and tell you more about the show. Actually, one of the best things about this show was that it never got maudlin. It had a few serious moments, but the whole event was far from depressing. We had expected it to be a bit like a telethon, but it was nothing like one; we were just entertained all evening, with just a tiny drop of information mixed-in, which is the way it should be. Everyone there already knew too much of the disease, and had donated in any way they could, so this show was mainly for entertainment; the work had already been done. 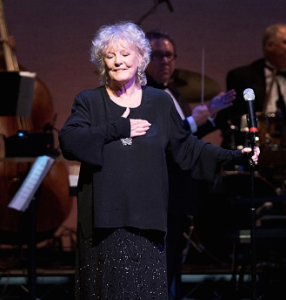 Petula Clark, being as touched by the reception she received as the audience was to see her! Photo by Earl Gibson for The ALS Association Golden West Chapter.

Maria and I were truly impressed with all the performers, including many who work on Broadway and tours all the time, but aren’t “names.” To hear those gorgeous voices in a pure setting of just them and a sixteen-pice orchestra, (led beautifully by Richard Allen,) was a true treat.

Speaking of treats, I shocked even myself to see how excited I got when the curtain opened and Petula Clark was standing there!!! I was screaming like I was twelve! And I was the first one who jumped up at the end to give her a standing ovation, something I am rarely wont to do for anyone. She looked exactly the same as when I was little, and sang better than ever! After all, who doesn’t want to go “Downtown?” 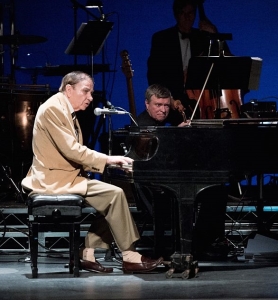 Richard Sherman at the piano, charming the crowd. Photo by Earl Gibson for The ALS Association Golden West Chapter.

In the “celebrity” category, Melissa Manchester also sang a gorgeous song, adorable Jason Ritter introduced a segment, and Bruce Vilanch did an amusing ditty. But the highlight, to me, was seeing my old pal, the nicest man in show business, composer Richard Sherman, sit at the piano and sing Chim Chim Cher-ee from his Academy Award-winning score for Mary Poppins. I’ve known Richard for two decades now, and had never heard him sing before! I cried the whole way through. (I’m getting choked-up again writing this!)

They closed the show in the most appropriate way ever. Fred Fisher, the President and CEO of The ALS Association Golden West Chapter, who had greeted us at the beginning, came back onstage and thanked everyone, and then Petula happily returned (Maria and I had kept saying we needed more Petula!,) and sang Rainbows, an inspirational song she wrote. [Note: I just spent over two hours looking for the lyrics to share some with you, to no avail. So just trust me on it.] When she was done, the cast entire joined her, and as the assemblage went wild with applause, the cast shot ribbons into the audience. What a high note to leave on! 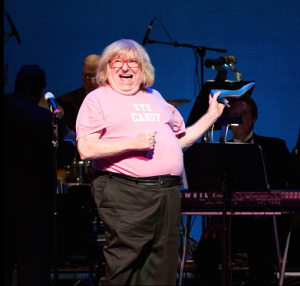 But the evening was far from finished! We moved back into redwhite+bluezz for the aforementioned dessert reception, which was delish. Better yet, we got to meet-and-greet most of the performers, including the iconic Petula Clark! I still can’t believe I got to chat with her awhile!

We really didn’t want to leave, but I wanted to get home and start writing this, while it was still dancing in my head. So, Maria picked-up her silent auction winning bid item, (a stunning black leather overnight bag,) we kissed Bruce Vilanch and redwhite+bluezz owner Art Silveri good-bye (several times each!,) and walked to the car with Richard Sherman and his lovely wife Elizabeth, which gave us all a chance to exclaim over the evening while we were still living it.

I can’t wait till next year’s event from The ALS Association Golden West Chapter! But even better would be if there’s no need for it. From my mouth to God’s ears.

If you’d like to donate, or get in early on next year’s One Starry Night, (or just want to see a list of all the performers you missed this go-round,) please go to: www.alsagoldenwest.org