Trending
You are at:Home»THEATRE»THEATRE: WHEN YOU WISH
By Karen Salkin on October 21, 2013 · THEATRE

I honestly believe that there are very few people in this country who have not been affected by Walt Disney. But I would venture a guess that we all take his creations for granted; I doubt that even five percent of Americans know where it all began, or how.

So now we have this new musical, When You Wish, to show us the origins of this genius. (What a perfect title, by the way!) While most of it is good, there a few areas that can be improved upon; but it’s all pretty entertaining. (It didn’t hurt that I saw it with a kind, upbeat, appreciative, intelligent, and honest person.) I actually got a tad choked-up when they showed him finally designing Mickey Mouse! 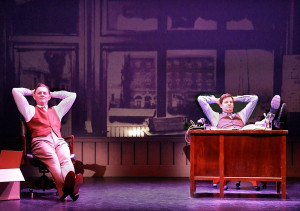 The positives are that all the actor’s voices are good, the story of what Walt Disney went through to become the Walt Disney we all know is interesting, and the backdrop is clever. (More on that in a moment.) But I have to discuss the weaknesses, as well, even though they really didn’t detract from my overall enjoyment of the production. I think this show is worthy of being seen, and the opening night audience had a great time. My good opinion of the show was shared by one of my pals, Disney songwriting great Richard Sherman, (Mary Poppins, It’s A Small World, Jungle Book, etc.,) who told me he thought it was a great show. He was very enthusiastic about it during the reception in the garden after, and I respect his opinion on something like this more than I do my own! But since I’m the one reviewing it here, I’m going to break it all down for you guys now.

The underlying problem with the show is that if you go to see what can be labeled a “Walt Disney musical,” you expect to see…a Walt Disney musical! The kind that the Walt Disney company is famous for! This show has none of Disney’s signature bells and whistles, nor the charm of all its stories that are based on classic fairy tales, so if you know that going in, I think you’ll be less disappointed. (I was aware of that fact, but when it started, I couldn’t help but miss all the color that I associate with anything Disney.) While I had to keep reminding myself that this show is about Walt Disney and not designed or produced by him, it’s still a tad odd that a musical about the originator of so much color in the world is almost sepia-toned. But since this story is about his struggles at the beginning of his career, the sparkle associated with him wasn’t invented yet, so the neutrals make sense. Even knowing that logic, I still yearned for some brights.

My favorite part of the whole show, one that I hope they keep in if they make it to Broadway, is a screen as the backdrop, on which so many clever touches are projected. There is everything from Walt’s original pencil animations, to stills from his early movies of the ’40s and ’50s. [Note: I’m so glad they put the dates of those movies on the screen, too, because I had no idea they were made that early. I think that all of us kids assume that a Disney film just came out the first time that we see it. That man was truly ahead of his time.]

Even though it’s the same two and a half hours that seems to be de rigueur for Broadway musicals, When You Wish seems about a half-hour too long. The story of Walt Disney from farm boy to major American institution is a long one to tell, so I understand the lengthiness, but there are several musical and dance numbers that could be cut, as well as some of the very wordy dialogue. Star Tim Martin Gleason, who’s on stage at least ninety-five percent of the time, might actually be a bit relieved to have a little bit less to say, actually.

Speaking of Tim, I had just seen him in the idiotic musical Sleepless In Seattle a few months ago, and he was a zillion times better in this show. He had better material by leaps and bounds, and it showcased his voice to its best advantage. His voice is actually beautiful in When You Wish, and his performance seemed to show that he was enjoying doing this one more, as well. Now if only we could get him to stand-up straight, and not hunch his shoulders over, we’d have an all-around winner. 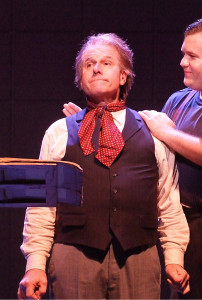 Norman Large, doing one of his comedic characters. Photo by Ed Krieger.

Speaking of winners, it appeared to me that the opening night audience’s favorite cast member was Norman Large, who played a myriad of characters Walt encountered along the way. He provided excellent comic relief to all the problems the Disney boys had to contend with on their journey to the top.

The music itself was pretty much yin and yang for me. Every singer had a good voice, but most of the tunes were far from memorable. Paper and Ink in the second act, performed by the brothers Disney, was probably the best number in the show, and although five days later I can’t think of the tune, I do remember that it was kind-of charming.

Now to the issue of dance in When You Wish, which I really hate discussing, but I must. As a former dancer myself, I’d rather see dance then just about any other form of entertainment, and this show had a lot of it. But it seems like all of the numbers were just there for the sake of having dance numbers in the show; they didn’t seem to come out of the story, or mean anything. (I still don’t understand the significance of pigs and gauchos as the characters in the first dance number.) And it was such basic choreography that even I could’ve lived without it. (I did appreciate that the dancers were mainly different shapes and sizes, rather than the usual just skinny ones. It made them more interesting to watch. The best dancer by far, to me, was Dance Captain Louis A. Williams. He gave every move just a little extra oomph, which I really appreciated.) 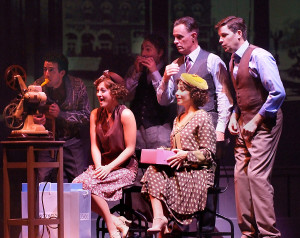 The Disney gang, enjoying one of Walt’s early cartoons. The audience is privy to only their reactions, not the cartoon itself. Photo by Ed Krieger.

I have to point out a bit of strangeness where famous Disney images were concerned. Even though I believe that this production has the blessing of key members of the Disney family, we never get to see any parts of Mickey Mouse cartoons, and when they put a cut-out of him on-stage at one point, my astute friend Roz pointed out that it was with his back to the audience, with only his silhouette being made out by us. So I’m assuming there’s some situation with the licensing of the Disney brand. If I had time, I’d try to get to the bottom of it, but even so, it might be a fun thing for you guys to look out for when you see the show.

Speaking of seeing it, even with its several shortcomings, I do recommend it to my Los Angeles readers. And since everywhere I look, it has “pre-Broadway” attached to it, I suggest you get in on the World Premiere right here in Westwood. Or else, down the line, you might be thinking about “when you wish”ed you had seen it! (Okay, even I groaned at that line. But it had to be said.)