Trending
You are at:Home»THEATRE»THEATRE: VALLEY OF THE HEART
By Karen Salkin on November 14, 2018 · THEATRE

VALLEY OF THE HEART

When I bumped into my former agent on the way into the opening night performance of Luis Valdez’s Valley of the Heart at the Mark Taper Forum last week, and he mentioned that this play is three hours long, I pictured myself running back to my car. Even though my attention span is much longer than that of most people today, (especially the ones who can’t get their faces out of their phones for even a few minutes without having a nervous breakdown,) that’s a very long time to watch one drama unfold.

But it went by in a flash! I never got antsy, nor gave even one thought to what else I needed to be doing. And this eye-opening tale is so important and worthwhile. (And, by the way, the running time is closer to two and half hours than three.) 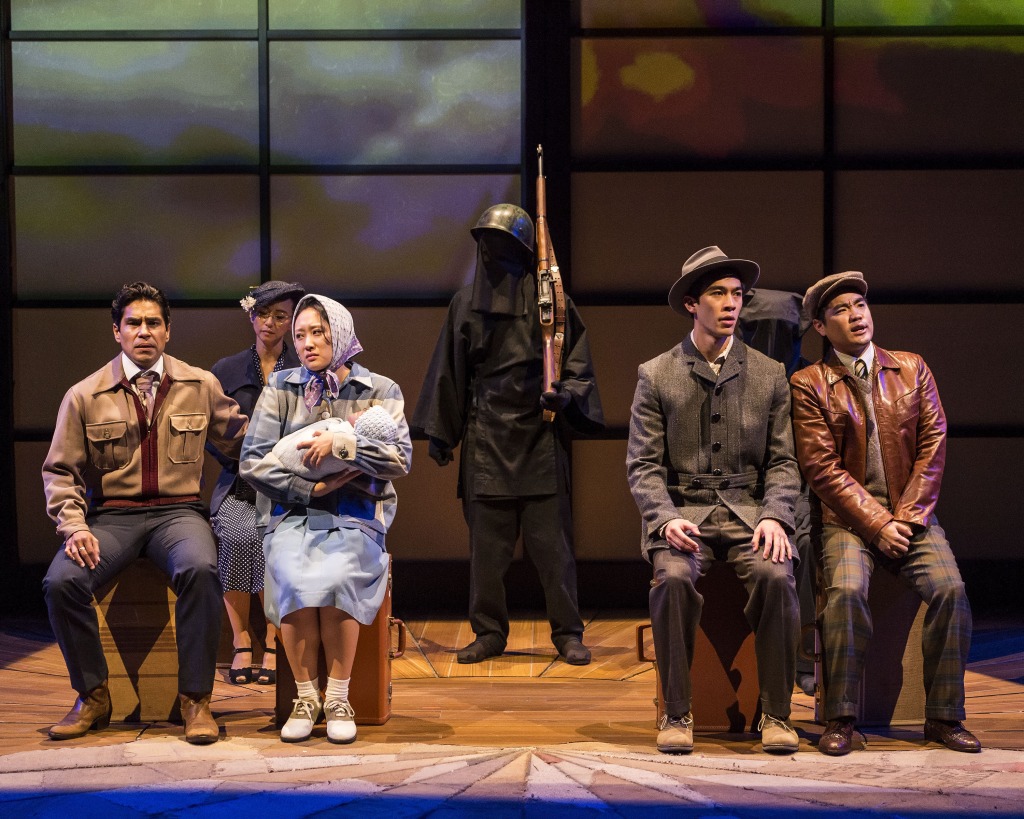 Photo by Craig Schwartz, as is the big one at the top of this page.

I’m ashamed to admit this, but even with having a few Japanese pals, until I saw Allegiance earlier this year, I had no idea of the hideous wrongs that were done to Japanese-Americans in the 1940s! I’m grateful that Valley of the Heart reminded me of it—all Americans should be knowledgable about this shameful part of our history, (which is, sadly, being somewhat repeated again by Orange Hitler! The heartbreaking injustices that he’s perpetrating on today’s immigrants, by separating families and putting people into what are essentially prison camps, turns the stomachs of all normal Americans.) 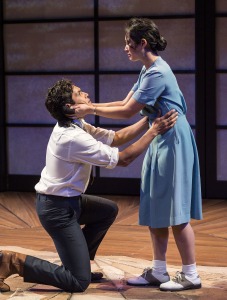 So, if you haven’t figured it out by now, that abominable era is the setting of this new play, Valley of the Heart, which is written and directed by Luis Valdez, the Los Angeles theatre legend most famous for writing and directing Zoot Suit (and its recent revival at this very same theatre.) It’s the saga of two families, one the Japanese farm owners and the other their Mexican workers, in Northern California between 1941 and 1945. At first, the focus appears to be on the Romeo and Juliet-type of love story between children of both families, but the action quickly moves to the horrors of the Japanese internment camps that came about as FDR’s administration’s reaction to Pearl Harbor. It’s mainly a gut-wrenching story, while still, surprisingly, having lots of humor. 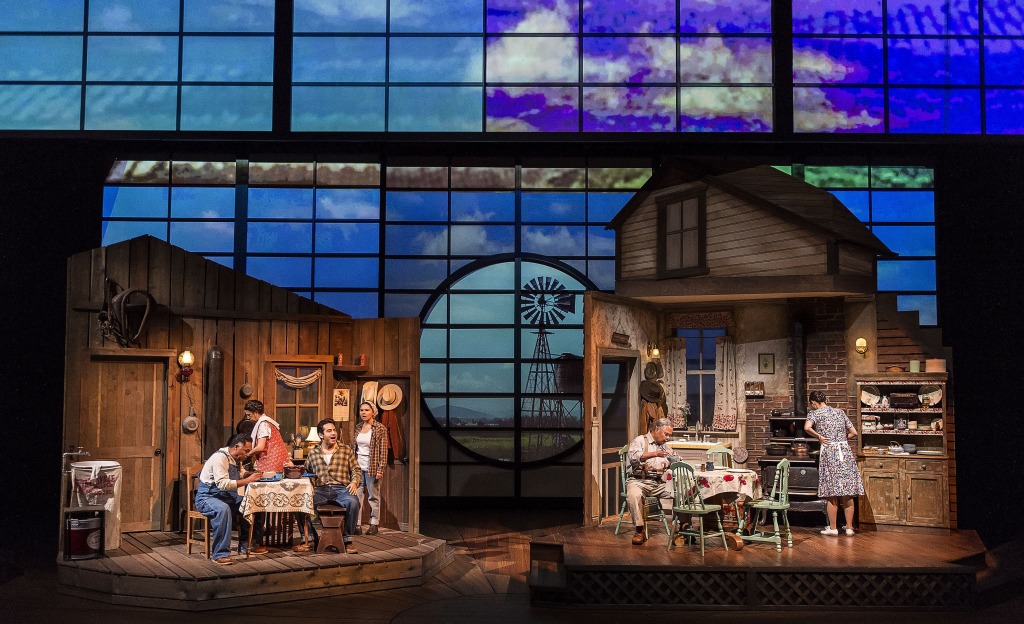 My favorite part of this production is John Iacovelli’s brilliant set; it’s truly one of the best I’ve ever seen anywhere! The kudos also go to David Murakami’s breathtaking projections over many Japanese screens. They portray each setting of this painful story perfectly. I found the entire tableau to be jaw-dropping. 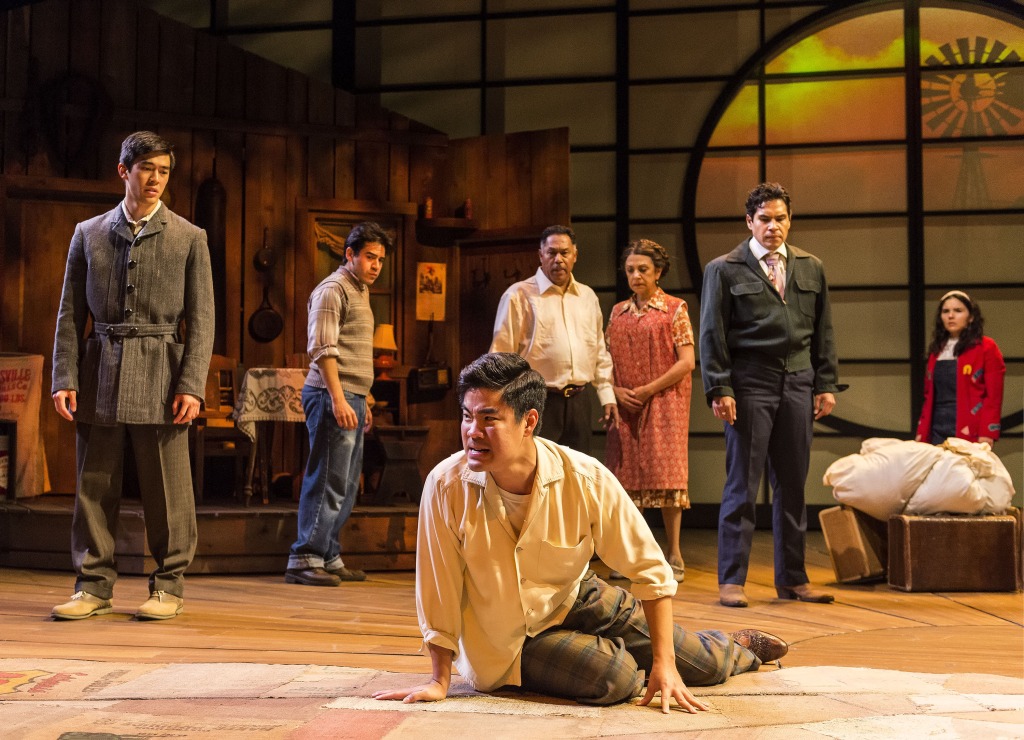 I do have to say that some of the acting is iffy, (which could be due to this being opening night, or perhaps because of the abundance of dialogue.) But Lakin Valdez, (the director’s son, by the way,) who plays the pivotal character of Ben, is one of the stand-outs along with Scott Keiji Takeda, (as the would-be suitor of Ben’s love,) who handles comedy and tragedy with equal aplomb. 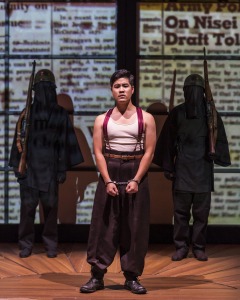 One really interesting aspect of the show is that there are a couple of stagehands dressed head-to-toe in black, whose occasional presence does not distract from the presentation before us, and actually adds to the drama. They’re listed in the Cast as simply “Kurogo,” which is how black-clad stagehands are referred to in traditional Japanese theatre. I appreciate that the program does not explain the title, leaving audience members to choose to learn or not. (No worries for you guys, though—I did the educational research for you!)

Also in the movement-with-no-dialogue category, there are a few instances of animal “puppets,” which not only add joy and mirth to the performance, but are fascinating to witness.

The audience I was in chuckled knowingly whenever Cupertino, California was mentioned, which was strange to me because I’m the only person, of the thousands I know, who’s ever been there! (And since it’s where I learned to make smiley face pancakes, I take that place seriously.) 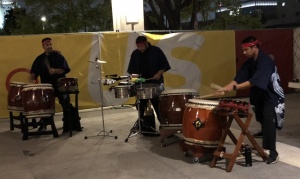 The taiko drummers on the plaza. Photo by Karen Salkin.

One fun perk of attending the opening night of Valley of the Heart is that as we arrived on the Taper plaza, we were treated to a trio of Japanese taiko drummers as part of the festivities. And then, when it was time for the crowd to get inside, the musicians led us in, this time playing handheld instruments. What a lovely touch.

On a side note, I commend the entire Valdez family for working together so successfully. Luis’ son and brother are in this production, with at least two other family members helping-out behind the scenes. The only project my sister and I could collaborate on is Whatever Happened To Baby Jane! (I just don’t know which one of us would be serving the other that rat!) 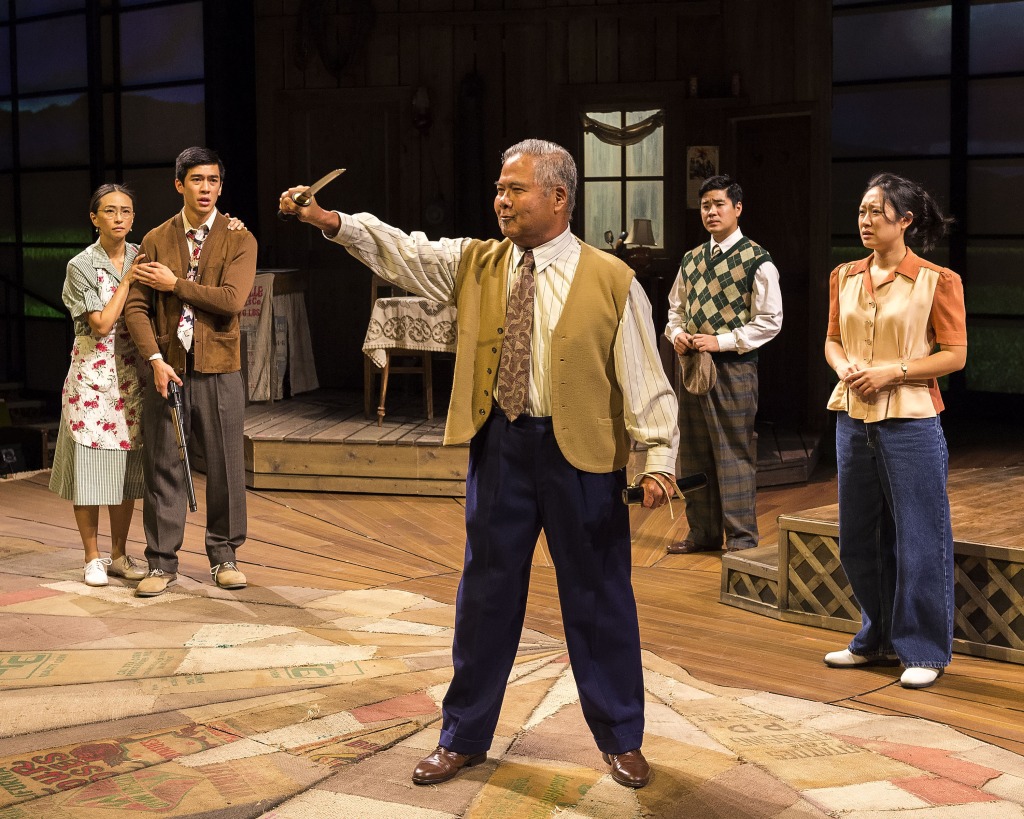 Getting back to this show, I encourage all Southern Californians to see Valley of the Heart. This is such an important part of our history, both past and future; the internment camps back then, (which should also serve as a cautionary tale right now,) and that it’s a play by such a revered theatre figure as Luis Valdez that I’m sure it will stand the test of time. And it’s an entertaining afternoon or evening of theatre, to boot!