Trending
You are at:Home»THEATRE»THEATRE: UPTOWN DOWNTOWN
By Karen Salkin on November 22, 2010 · THEATRE

I don’t think that most of us realize that before Diana Ross, Aretha Franklin, and later Whitney Houston and Beyonce, there was the fabulous Leslie Uggams, blazing the trail for beautiful black female pop singers. I sure didn’t. (In reality, she’s the same age as the first two ladies, but started when she was a young girl, so she’s been around longer.)

But, luckily for us in Southern California, we have Uptown Downtown, her new one-woman musical evening at the happily re-opened Pasadena Playhouse, to remind us.

[Sidebar: Congrats to the Playhouse for doing whatever it is they needed to get done to re-open in less than a year. We Los Angeles culture fans are thrilled to welcome them back. I, personally, love that venue, and feel like a real grown-up walking through their doors.] 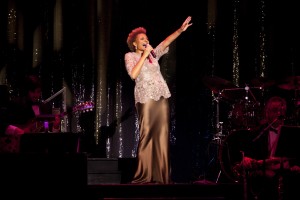 Ms. Uggams is also the prior-day Halle Berry, being the gorgeous star of the hit mini-series Roots, creating a role that would surely go to Halle if it were re-cast today. I’m glad to see that she’s still beautiful and that the years have not changed her looks one iota. Pretty amazing. (As a matter of fact, here’s one funny note that I jotted down during the performance, that most females will understand, and it’s one of the absolutely highest physical compliments I can bestow upon a female. It reads “excellent neck and jaw line!” Amen to that, honey!)

Uptown Downtown is basically the kind-of show you’d see in an intimate, classy New York supper club, like Feinstein’s; a supreme songstress styling with an eight-piece band right on stage. (It was actually at Jazz at Lincoln Center before it came here.) In between her many songs, which prove that she, amazingly, hasn’t lost one ounce of her lovely voice, Leslie tells some old school show business stories of her journey, which are interesting to hear.

In all honesty, I must admit that the presentational style of her tales is not my cup of tea, (fans of Karen’s Restaurant Revue know that I’m a totally off-the-cuff kind-of gal,) but the audience loved the whole shebang. Watching it unfold made me miss my father, who would have loved, loved, loved this show. So would have the patriarch of my sort-of second family, the Hazels of Providence, Rhode Island, and I enjoyed picturing the two men sitting together in the audience being enthralled by the proceedings, as was the rest of the assemblage.

All the songs were pleasing, and Ms. Uggams possesses the voice and vocal control of a woman thirty or forty years younger. Impressive. My favorite was a Smokey Robinson-like rendition of the Drifters’, her favorite 60s group, Up On The Roof, which I feel she could record right now and have a hit with. It was breathtaking. And the best part of all the tunes was that we could understand every single word she uttered! Please trust me on what a rare feat that is.

I especially enjoyed watching the mostly-mature musicians, who must have been around long enough to have seen it all, enjoying her. Their talent and gusto added to the fun of the show a lot for me.

I was a tad confused by her take on the concepts of uptown and downtown, though, because we of the Gossip Girl generation have it totally reversed, but I just relaxed and went with it. (And maybe “upper east side” is different from “uptown” itself. I’m an expert on only Brooklyn, not Manhattan.)

I’m really happy to have seen this show because I’ve known of Leslie Uggams my entire life, and, shamefully, probably the only thing I could have told you about her prior to the other night, is that her Roots character, Kizzy, spits in Sandy Duncan’s character’s cup near the end. (A shocking, and applause-drawing, moment in television history.) I wasn’t aware of her Tony and Emmy awards, nor of the fact that she had her own TV show at the end of the 6os. Quite a set of achievements!

The evening began with a welcome back to the Playhouse from Artistic Director, Sheldon Epps, and a presentation to honor Lena L. Kennedy for her leadership and support of theatrical diversity at Pasadena Playhouse and the American Theatre.

The after-party on the patio was even more delicious than usual, with food provided by several different caterers, including my three favorite dishes, Elements’ mac and cheese, Bonnie’s B. Smokin’ Barbecue’s ribs, and Charlie’s Trio Restaurant & Wine Bar’s meatballs, but the intermission was even more fun than that! I bumped into two of my favorite men ever, and it turns out that the whole group, which included some of our guests, and fabulous theatre publicist, Ken Werther, all know each other.

First up was Michael Orland, the associate music director for American Idol, who’s lost a ton of weight since I last saw him. (I think I found it, though, unfortunately.) I always thought he was attractive before, but now he looks like he could be his own son! The next pal-sighting was real freaky for me because I hadn’t seen this fun guy in years. Here’s why it was freaky:

As I was watching the first half, I harked back to one-person musical shows I’ve seen before, and instantly, my three favorite performers came to mind. Adam Lambert was first, of course, then the unbelievable Ollie Woodson, whom we sadly lost a few months ago, and finally, Dale Gonyea, an incredible singer/pianist/comedian whose shows are a riot. Five minutes later, I was walking through the lobby at intermission, and I screamed–Dale was right in front of me! I know that I supposedly have mild ESP, but this one was ridiculous! I couldn’t stop hugging him. (I think that interaction may have scared him away from the Playhouse from now on.)

So, to sum up, a wonderful upbeat musical performance, great after-party vittles, one of the most fun audiences ever, and a return to an old favorite theatre–just about a perfect evening.