Trending
You are at:Home»THEATRE»THEATRE: TRACES
By Karen Salkin on January 19, 2011 · THEATRE

I just had the best birthday last Friday, January 14th, by accident! For the first time in forever, I had not planned a party or at least had a bunch of girlfriends plan something for me. (Mr. X always does so much for me at Xmas that I let him off the hook for making bday plans for me.) But I spent the daytime at a wonderful gifting suite, (which I’ll tell you about on Friday,) and at night, I attended the opening night of Traces at the Ricardo Montalban Theatre in Hollywood. That show turned-out to be the highlight of the year so far! It was spectacular and I only hope that all my readers get a chance to see it while it’s here. 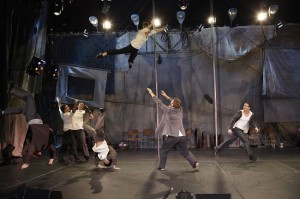 All photos by Michael Meseke.

I’ll tell you more about my great affection for the actual theatre in a few, but first I must kvell over this fabulous show! It’s like a mini-version of Cirque du Soleil, in that it’s a group of clever, inventive acrobats, known as “7 Fingers,” in their native Montreal. I was so riveted that I couldn’t take my eyes off the stage for even a nano second to write any notes!

Traces is one of four shows created by this group. Like their countrymen who run Cirque, they’re obviously prolific enough to continue on for many years to come, and I only hope that I’m lucky enough to get to see every work of theirs. I thank Broadway L.A. for bringing this amazing entertainment to Southern California. 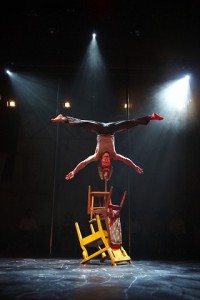 Traces features a group of six guys and one girl (hence the”7″ in their moniker) who move seamlessly from one set of athletic feats to another. Some are group acts, one is an incredible two-person adagio number, and a few feature just one performer, like the chair balancer and a giant hoop guy. (Are you impressed with my great knowledge of technical terminology?)

While my mind was boggled by their creative use of everyday sports equipment, such as basketballs and skateboards, I was most amazed by their awe-inspiring pole work. Mr. X (yes, he had to come with me because it was my birthday,and we’re both glad he did!,) said his favorite was the lone female spinning above the stage on a rope in a flowing red dress. (The dress, btw, is the only splash of color in the whole show. The sets and wardrobe are just gray and white, I think because no color is necessary with such derring-do.)

The one section we didn’t understand, though, was the one that probably gave this show its name! They all traced each others’ outlines on the stage, but we didn’t get the purpose, unless it was to finally catch their collective breath for a second. No matter, though, because it didn’t take away from the show, and in actuality, gave the audience a chance to catch ours! 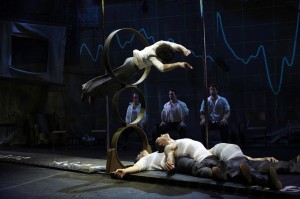 The show is very short, (I have a feeling it’s a mere ninety minutes, but it felt like only fifteen because I wanted it to continue,) with no intermission. And no net! But, if I were you, I’d take my seat quickly, and not do anything gross while you’re walking through the lobby. (You’ll have to see the show to find-out what I mean.)

On opening night, we went up to the mezzanine party space for the post-show reception, which was catered by Bravo Pizzeria from Santa Monica. I had eaten there before, but never realized just how delicious their pasta is! Mr. X was in love with the red sauced penne (I love seeing him enjoy food, which is rare,) while I could have eaten a barrel of the one with chicken and mushrooms.

Now, a word about this theatre itself. It has a special place in my heart for several reasons. First of all, when it was known as the Doolittle, it’s one of the first theatres I ever went to when I came to L.A. as a teen-ager. (It was the Huntington Hartford before that, and we often still called it the Hartford because we were so impressed by its history.) My other young actress pals and I would scrap money together to buy student rush tickets and sit in the balcony, and it was magical.

Then, as I moved along in my career and met more people in the industry, I was invited to a private dinner at the home of Joseph Barbera, creator of the revered animation company, Hanna-Barbera. As if that wasn’t impressive enough, (he said my voice would be perfect for cartoons, and told me to call him, but of course, I was a young idiot who let yet another fabulous opportunity slip though her fingers,) I met James Doolittle there! The man who owned this fabulous theatre! I love Hollywood history, and here was tons of it, sitting at the dinner table with me! I could barely eat. (But we all know that I did manage to.)

Then, when I grew-up and started hosting Karen’s Restaurant Revue, this was the very first theatre that I was invited to all the opening nights of! All very heady stuff for a young girl.

Shortly after that, I was honored to meet the absolutely loveliest man in show business, Ricardo Montalban, when Mr. X starred in some TV show with him. What a truly classy gentleman he was. It’s a privilege to enter a building that bears his name. And Traces is a fitting show to be appearing there.