Trending
You are at:Home»THEATRE»THEATRE: THE SPITFIRE GRILL
By Karen Salkin on July 19, 2019 · THEATRE

The Garry Marshall Theatre in Burbank, (or Toluca Lake, for you geographic snobs,) is probably the easiest, most comfortable theatre in town, with the best sightlines anywhere! So seeing just about anything there is truly a treat.

That being said, their current offering, The Spitfire Grill, is not my favorite. It’s definitely worthwhile, just not my cup of tea. 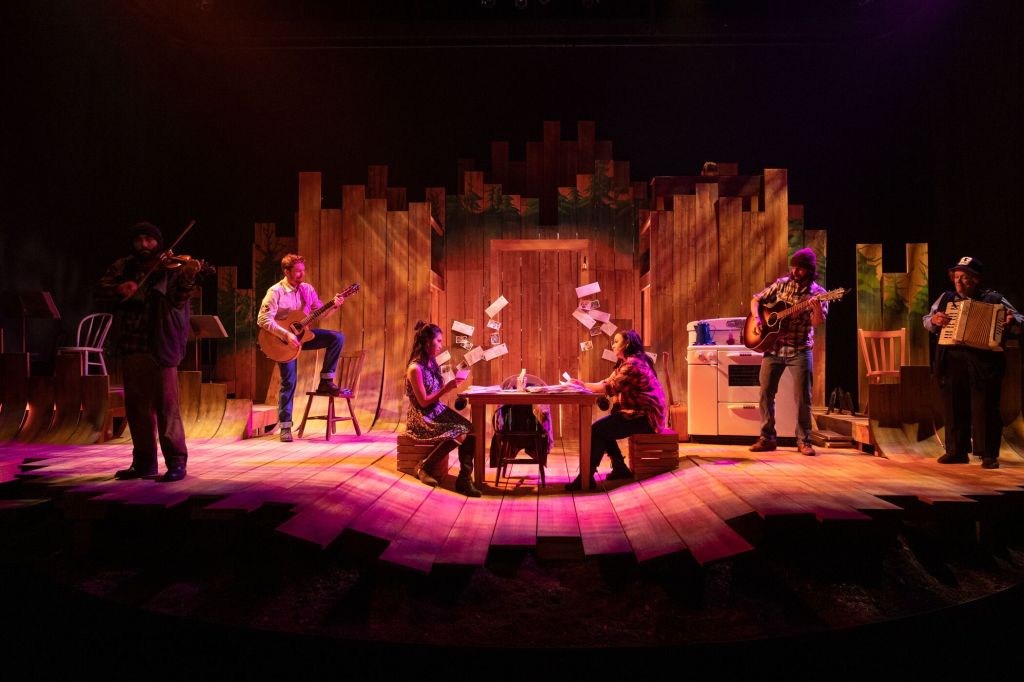 Photo by Aaron Batzdorff, as is the one at the top of this page.

It’s based on a 1996 film which I remember disliking, so I was surprised to recently discover that it was written by Lee David Zlotoff, the man who created the scientifically-advanced (in a very fictional way) MacGyver! I never saw that original series, but I’m really into this current one; though totally formulaic, it is exciting, unlike the snoozefest of a story (which you can look-up for yourselves) that the uber-old-fashioned The Spitfire Grill is. So I have no idea how one man could come up with two such disparate-in-every-way scenarios. [Note: I didn’t want to refresh my memory of the storyline beforehand because I like to come at every entertainment with fresh eyes. And I’m glad I hadn’t researched it because the musical has an a million times better ending than the movie does; if I had been expecting the one from the screen version, I would have passed on seeing the musical adaptation.]

My non-love aside, The Spitfire Grill does appear to be a very popular show around the world, from what I’ve learned. And I do understand what others see in it. But for me, it’s just not an engrossing tale. And, I’m sad to say, all the music sounds the same; it’s like one long continuous song.

But there’s much to laud about this particular production of it, so let’s focus on that, shall we? 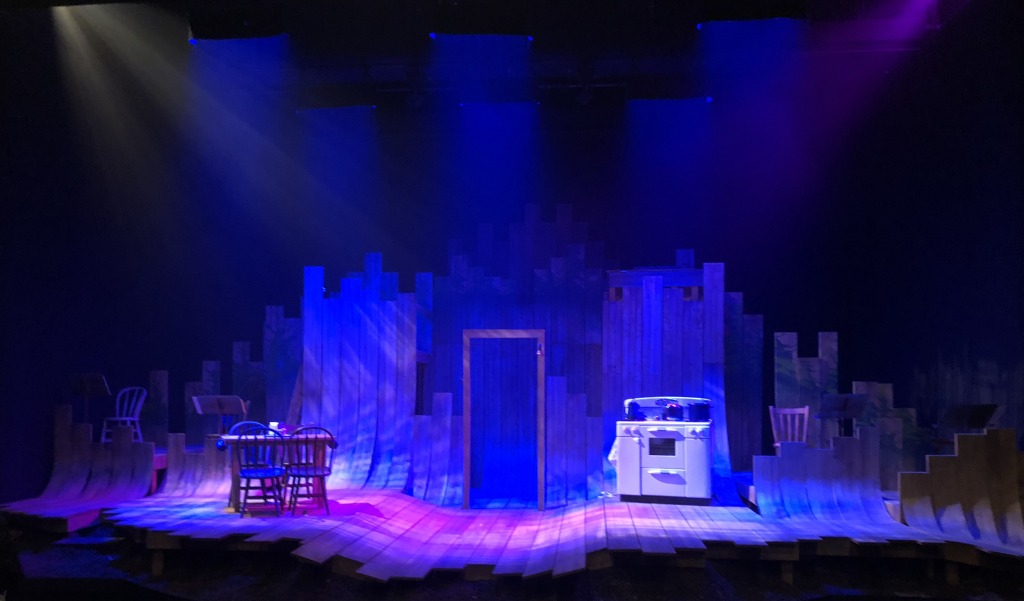 The Tanya Orellana-designed set is very attractive and so creative. As you settle into your seat, that beauty makes you look forward to the journey ahead.

I don’t know how the musical is actually written, but this presentation is very interestingly done, with the actors doubling as the musicians, à la Broadway’s innovative 2005 revival of Sweeney Todd. (Or are the musicians doubling as the actors?  Either way, them all being so multi-talented is the most impressive part of this show.) The musicians are excellent.  And there are several instruments you just don’t see every day. Piano, guitar, and violin are one thing, (well, actually three,) but the accordion, mandolin, clarinet, and flute are another story. So good job to all of them. 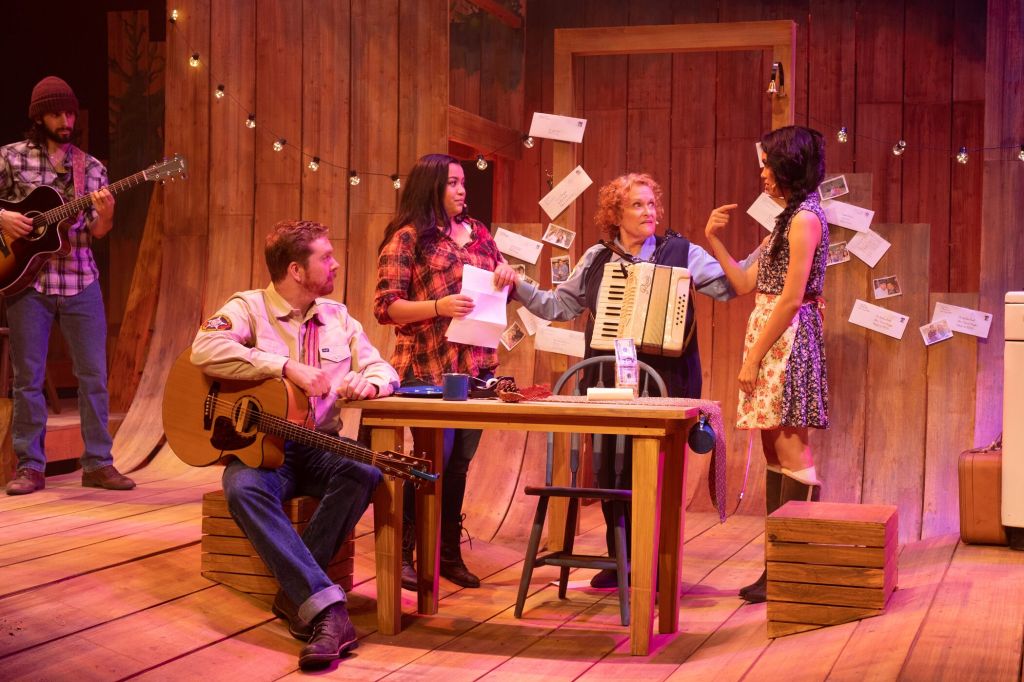 And all the singing is high quality, as well. The star, Rachel Sarah Mount, has quite the pipes on her–her big voice fills this theatre! My friend especially enjoyed the voice of Ashley Argota, whom I had first appreciated in an Aladdin “panto” at the Pasadena Playhouse about six years ago. The duets of those two ladies are perfection.

Erich Schroeder, who plays the Sheriff, is into his guitar and singing like no one else on that stage. He’s a natural. He’s one of two performers here who seem one hundred percent authentic in his or her role.

The other is Sarah Saviano as Hannah, the beaten-down-in-life longtime owner of the Spitfire Grill. While her actual singing voice is not as strong as those of the rest of the cast, her performance of the song Way Back Home, towards of the end of the show, makes it the most touching number (and moment) of all. It’s the only one that really got to me. 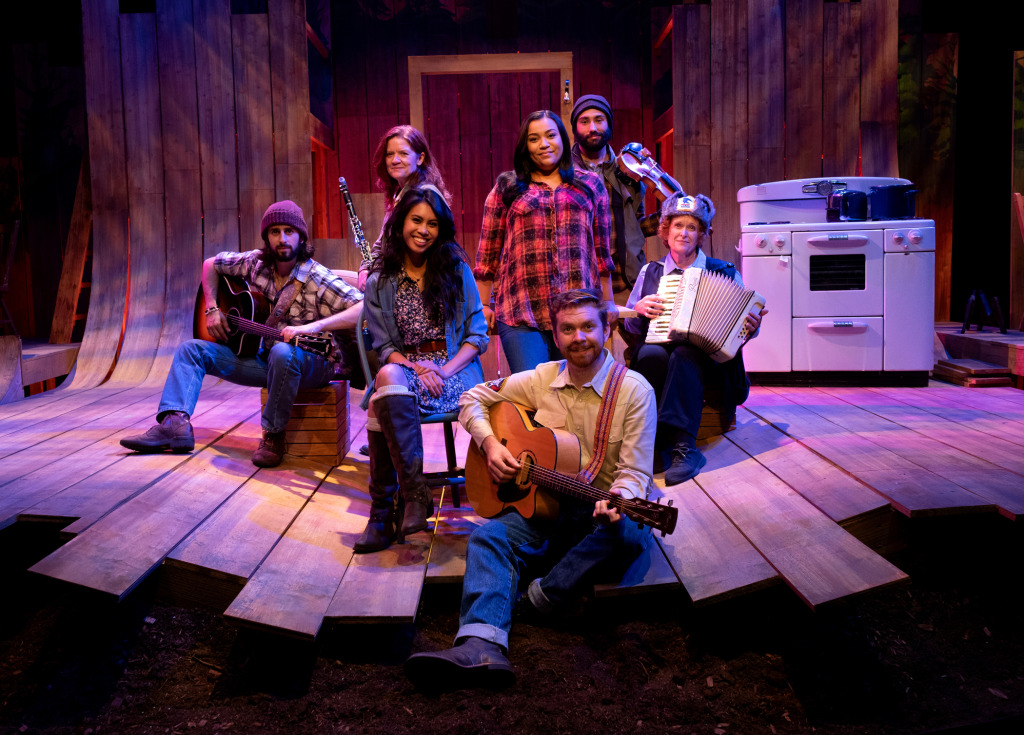 And on top of that, Sarah is the actress who also plays the clarinet and flute. As a former flutist myself, I always get a kick out of seeing someone play the latter instrument. (I’m using the term “former flutist” very loosely. I played it in grades six through ten, and—let me put it this way—several people thought the only reason I kept being included in those classes was because my male teachers liked me, an assessment I’ve been horrified to realize in retrospect is most likely correct. But at least my brother got a major Broadway career out of it—my parents made him play the flute so that they wouldn’t have wasted the money on buying it for me, which they did because I was absolutely in love with the rich blue velvet interior of the case! Great musicianship on my part.)

I chuckled when the characters said that there was nowhere else to eat in town; that reminded me of the adorable petite city of Sierra Madre, (right past Pasadena for you outskirts-of-Los-Angeles-challenged peeps,) where there’s a restaurant called The Only Place In Town.  I love the feelings that spots like that evoke!

There is one aspect of this production that really got on my nerves. I don’t know who decided that the characters have to ring the bell at the diner door, (which is to indicate the door’s opening and closing,) every single time they enter and exit, but it becomes very annoying after the first, maybe I’ll even give them second, time. So irritating. 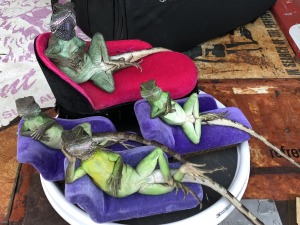 I just had to show you the lizards! Photo by Karen Salkin.

But all in all, I suspect that most people will enjoy this show. If nothing else, just close your eyes and let Nico Brouillette’s beautiful violin playing wash over you. That alone is worth the visit to The Spitfire Grill.

And if you see it on a Friday night, go early, so you can not only have a snack from the outside window in the back of the directly-across-the-street Bob’s Big Boy, (which you should do anytime you’re at the Garry Marshall,) but you can stroll their weekly Classic Car Show, as well. You might even see one truck owner’s crazy display of live lizards posing in tiny lounge chairs! No lie.