Trending
You are at:Home»Uncategorized»THEATRE: THE MUSICAL COMEDY MURDERS OF 1940
By Karen Salkin on September 15, 2015 · Uncategorized

THE MUSICAL COMEDY MURDERS OF 1940

Despite the few negatives that I’ll tell you about in a minute, The Musical Comedy Murders of 1940 is an entertaining, painless evening at the theatre.  And, with good air-conditioning inside the auditorium of Theatre West, and free parking right across the street, this is an easy, fun, affordable end-of-summer night out for everyone. 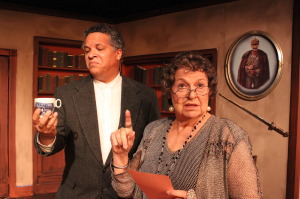 As a big fan of old black-and-white mystery movies, I was interested to see this show.  With a cast of ten, and many tricky exits and entrances, it was a pretty big undertaking for a small theatre.  The Musical Comedy Murders of 1940 was mainly successful, but the opening night performance, which was far from smooth, made it pretty clear that the show would have benefitted from an extra couple of weeks of rehearsal.  It just hadn’t gelled yet.  (But it may be more cohesive by the time you see it.)  It was like each actor was still doing his or her own thing, without working quite together yet. But the production definitely has potential.

Let’s go with the positives first. Theatre West has the perfect stage for such a big cast, and the Pettifogger-designed set suited the complicated action to a tee.

The music that was used occasionally was witty, and surprising, when needed. And I loved the hostess character’s silver dress.  It would have been the staple of my dress-up trunk when I was little, right next to my black-velvet-with-pink-satin-lining cape! 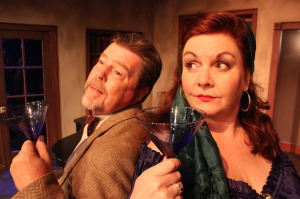 Anne Leyden, as the composer character, brought some life to the stage.  I really don’t think you can cut the action and dialog before her entrance much, because it’s mainly exposition, but it seemed that the audience perked-up a bit when Anne entered.

The show ended on a positive note, both figuratively and literally; the latter because Michelle Holmes actually sings, and sustains, a fabulous singing note! 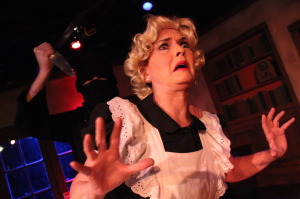 The curtain call was interesting, cute, and upbeat, and left the audience in a festive mood for the rest of the night. I do love a show that entertains, and isn’t trying to make you ponder life. I really appreciate that. And I did enjoy many laughs throughout the evening, especially provided by Nathan Lane look-alike, Scott Seiffert.

I have to laud Theatre West for something major, in my opinion. I give them so much credit for not insisting on using real smoke, as many theatres still do.  Only one character smokes to begin with, and her cigarette appears to be a prop one that lights up at the end.  I hate the theatres that get so righteous about needing authenticity for stuff like that, when it’s all make believe to begin with! So, big props to this company for not making the majority of the audience uncomfortable. (And subjected to second-hand smoke!) 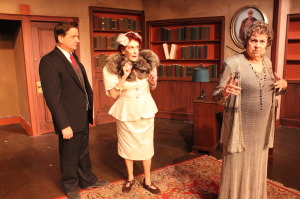 And now to the slight negatives. Even though I was not a fan of Ivy Jones’ performance, I must say that her program bio is one of the most amusing and well-written I’ve ever seen! So, that leads me to believe that perhaps she was just mis-cast in this show.

And the play itself is a bit more confusing than entertaining, which is because the writing, by John Bishop, is so murky.   I’m pretty surprised to find-out that it had been on Broadway, no matter how briefly. But that was almost thirty years ago, when perhaps audience’s tastes were a bit more simple. 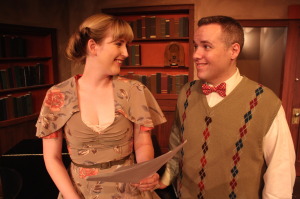 No matter all that, I still recommend The Musical Comedy Murders of 1940 as a night out. I just have to be honest and give you the yin and yang of it. But whichever is the good one of those two outweighs the other, in this case.

Theatre West always does a much-enjoyed raffle at intermission, along with promo announcements of their upcoming productions.  I was grateful for that this time because it reminded me to save the first week-end in December for the holiday kick-off show, Millennium Magic, which stars members of the private Magic Castle in Hollywood.   It’s the magic and comedy show that I make sure not to miss each season, so please mark it on your calendars, as well. (And, I promise—no one gets murdered in that one!)