Trending
You are at:Home»THEATRE»THEATRE: THE GOSPEL AT COLONUS
By Karen Salkin on June 26, 2015 · THEATRE

THE GOSPEL AT COLONUS

You don’t need to know anything else about this show except for that I’m telling you you must see it!  Don’t let the subject, Oedipus, deter you, like it almost did me.  You don’t even have to follow the story, if it doesn’t interest you; for me, it was all about the wonderful music. (This is how good it is—I cared more about what was on stage than I did the after-party! And you all know how much I love a good party!) 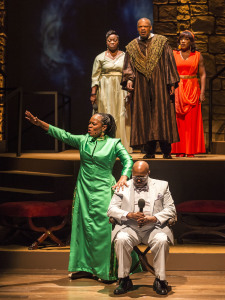 (Front L-R) Kim Staunton and Ellis Hall. (Back L-R) Sharetta Morgan-Harmon, Roger Robinson, and Jackie Gouché. Photo by Craig Schwartz, as is the main one, above.

If you, too, are a fan of fabulous singing, you must rush to the Nate Holden Performing Arts Center in Los Angeles to see the Ebony Repertory Theatre’s production of The Gospel at Colonus.  It’s a musical based on Oedipus at Colonus by Sophocles, and it premiered at the Brooklyn Academy of Music…in 1983! It received many accolades then, (including being nominated for a Tony, and the book being a Pulitzer Prize for Drama finalist,) and I’m here to give it some more now. (I can’t believe that I didn’t see the original at BAM, because, growing up in that now-hip borough, my family went to that theater all the time. I thought it was the most famous place on earth!)

The musical is set in a Pentecostal church service, where the preacher is telling the congregation (the audience) the classic story of Oedipus at Colonus, in a way that no one who’s never been to one of those services can imagine. The on-stage participants act out (and sing) the highlights of of the tale the preacher is telling. It’s a wonderful way to bring the work of Sophocles to the masses, who might not otherwise choose to see his plays. (I’m raising my hand!) It was more like a day at a rousing church celebration than a night in a theatre. How Lee Breuer, who put it all together, even conceived of this crazy mash-up to begin with is beyond me. 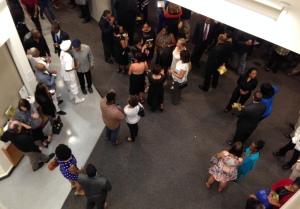 Part of the attractive opening night audience, viewed from the upper level. Photo by Karen Salkin.

Opening night was a glorious experience.  What a privilege it was to hear those incredible voices! In the middle of the show, I actually thought of changing my religion!

Bob Telson composed the rousing music, and this production, which commemorates the 30th Anniversary of the Los Angeles Premiere of it at the now-defunct Doolittle Theatre, (remember that great place?,) is very well-directed by Andi Chapman.

The stunning set is very cleverly designed by Edward E. Haynes, Jr., with the back pillars of the church doubling as Greek columns. It’s all very majestic looking.

The whole opening night experience was especially powerful and moving, and relevant, in the face of the evil that had taken place just three days earlier at the Emanuel African Methodist Episcopal Church in Charleston.  My mind could not help but reflect on that horror during the performance, but the intense music actually did lift my spirits, which I’m guessing is what it’s always intended to do. 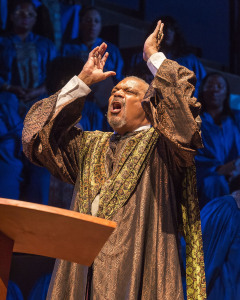 As for the performances themselves, we were lucky enough to witness Roger Robinson, (who won a Tony Award in 2009 for Joe Turner’s Come and Gone,) take the lead masterfully as the preacher.  He sure got my attention!  It was hard to believe that he’s an actor, and not actually a man of the cloth.

The show also features Ellis Hall, who did Oedipus’ singing. If you know music at all, and recognize his voice, it’s most likely because he was the lead singer (and keyboardist) for Tower of Power in the mid-1980s.

My favorite was  Samuel Butler, who, as the “Balladeer,” sang and played a mean guitar.  I kept thinking that he had an all-timey soulful voice that I had heard back in the day. It turns out that he was a member of the Blind Boys of Alabama, and appeared in the original production of this musical with the group. Mr. X taught me to be a fan of theirs a long time ago, and I’m happy to say that I’ve seen them live in concert. [Note: Samuel’s not blind, so I don’t quite understand why he was in that group, but I’m just grateful that his voice is recorded with them for posterity!]

Speaking of Samuel’s guitar playing, I must laud the on-stage musicians he was a part of. What an excellent group of artists they are! Nothing is better than live music, and the show would not have been the same without this band, which is helmed by Musical Director Abdul Hamid Royal.

The presentation is rounded-out beautifully by  a chorus of members of the Tony Jones-led Los Angeles Young Adults of Gospel Music Workshop of America.

And lastly, I must tell you to please read the program! Besides that it gives the synopsis, which is really helpful, the heartfelt note from producer Wren T. Brown is definitely worth reading.