Trending
You are at:Home»THEATRE»THEATRE: THE FULL MONTY
By Karen Salkin on April 18, 2016 · THEATRE

My very first sentence to my pal, Alice, as we left the Redondo Beach Performing Arts Center on opening night of 3-D Theatricals’ production of The Full Monty was, “What a fun show!”

I had seen the touring company of the Broadway musical at The Ahmanson Theatre fourteen years ago, and still remember it fondly, so I was happy to see that this “regional theatre” rendition definitely held-up to that one. (I put “regional theatre” in quotes because that is the official designation of 3-D Theatricals; but don’t let the label fool you—this company always rivals the Broadway originals.)

The male cast. I just realized that it looks a bit pervy to have a kid in there, smiling at the men stripping, but it’s the main character’s son, so he’s in on the money-making attempt from the outset, which I guess somehow makes it okay. Photo by Isaac James Creative.

Since the The Full Monty was first an unexpectedly famous British film, I’ll remind you of the plot line just this once. In 1992, a bunch of [relocated from England for the musical] Buffalo, New York steelworkers lose their jobs, and decide to do a one-time only number in a strip club to make money. (I don’t know how the writers came up with the sum of fifty thousand dollars as what they’re going to make for that one performance, but that’s what the characters keep saying. If that’s what strippers really make, I just might become one! And I hate that sort-of thing!) Nearing the big night, the leader of the group announces that they’ll be going “the full monty,” which means full frontal, much to the dismay of the rest of the insecure men. So, will they or won’t they? You’ll have to wait till the very end to find-out. (But here’s a clue—we were all screaming by then! And we left with big smiles on our faces.) 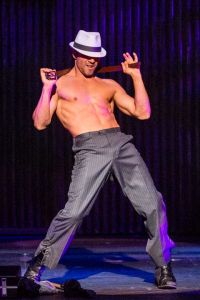 I can’t remember if the original opened the same way as it does in this production, (with an authentic strip number,) but either way, it’s a good idea. Just to make sure we have some male eye candy for the evening, (since the rest of the roles are “regular-looking” men,) they begin with a guy whom Alice and I assumed just has to be a real stripper because his body is so gorgeous! Clever move. (Turns-out, Justin Berti is really an actor, but if ever that doesn’t work out for him, he has something to fall back on!) [Sidebar: I almost panicked seeing the opening because it reminded me of my only birthday party I haven’t organized for myself. Mr. X threw me a surprise one, and left it in the hands of our talent manager, Stuart, to plan. And guess what? Stu ordered not one, not two, but three strippers for me! The first one was bad enough, but the second one came dressed as a cop. He threw me against a wall, and took out his night stick. (The real one, not his male unit.) I started screaming and crying. It was a horror show. So, Stuart quickly cancelled the last one. Ya think?!]

David Engel and Janna Cardia in the center. Photo by Isaac James Creative.

The casting for this production is all spot-on, though the singing voices, (outside of Tyler Miclean’s,) are far from spectacular. The voices themselves are not important, though; it’s the lyrics and performances that count, and luckily for us, this group delivers the impact of the numbers, and every single word is discernible.

Even though the show is about men, it’s really two females who steal the show. As the wife of the former boss of the steel mill, Carol Burnett doppelgänger Janna Cardia gives her numbers her absolute all. Every time she appears, she dishes-out a welcome shot of adrenaline. 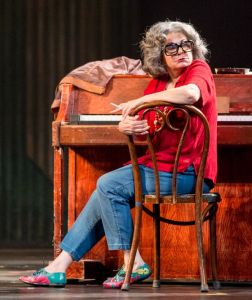 And Candi Milo delivers her old-school-rehearsal-pianist deadpan lines with panache. She’s perfect! On opening night, when she first showed-up on the stage, mostly hidden behind the piano, I thought her part was going to be an auxiliary one. But the second she started talking, she made an impact. Within two minutes of her speaking, Alice whispered, “She’s my favorite.” Duh. I have a feeling the entire audience felt the same way. The strange thing is that I don’t remember even a second of that character from the show those dozen plus years ago, so I have a feeling that Candi makes more of the role than is written. So, big props to her.

There are also two men who stood-out to me. As a major Forever Plaid fan, I was thrilled to David Engel again. (He works a lot; I just haven’t seen him a while.) I had not realized how graceful he is, and I loved seeing him dance. And, Alice kept pointing-out that he has the best body in that sextet of ersatz strippers! You go, boy! 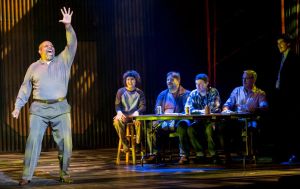 Rovin Jay on the left. Photo by Isaac James Creative.

The number that I assume always brings down the house is Big Black Man, and that’s no different here. Rovin Jay does it proud, and his many dance moves equal the fabulous lyrics of the song. I could have watched just that one performance several times in a row!

The only problem with the show is that it’s way too long, which has nothing to do with 3-D; it’s written that way. But, it could lose several of the ballads, which are in the category of “Enough Already.” The movie had to deal with all the men’s family dramas, to flush out the story, but here, with all the added time for the musical numbers, the writers could have done away with much of that seriousness, which doesn’t add to the fun. We get it—the main dude has a contentious relationship with his ex-wife and her new beau—we don’t need so many scenes about it. Let’s just move it along, please. 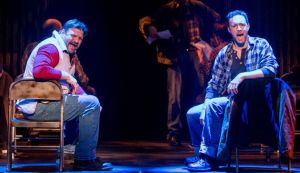 But that’s really the only criticism of this show, in general, that I have. The production itself is excellent. I highly recommend it, to all females, and males who can take it. It’s definitely not for kids, though! For those audiences who are used to 3-D Theatricals’ Disney-type shows, this is not one of those!

And now it’s moved on the Orange Country location below, so SoCal audiences still have time to see it. It runs until Mother’s Day, so I think tickets to the show would be a great gift for a hip mom! And if ever you get to see anything at the Redondo Beach location, do it—I love that beautiful theatre, especially the unbelievable leg room at the seats!