Trending
You are at:Home»THEATRE»THEATRE: THE CONSUL, THE TRAMP, AND AMERICA’S SWEETHEART
By Karen Salkin on November 22, 2016 · THEATRE

THE CONSUL, THE TRAMP, AND AMERICA’S SWEETHEART

At the post-show reception for this short play, a man (who appeared to be a long-time patron of Theatre 40,) came up to me and declared, “This is the best show they’ve ever done!” That sentiment seemed to be a popular one on opening night.

Even though The Consul, The Tramp, and America’s Sweetheart was written over a year ago, just prior to this election cycle, and is about a long-ago time in history, it is so relevant today that I was actually a little taken aback. I’ve been going out since November 8 more as a diversion than for my usual fun; I’m trying hard to forget about the creepy orange man who was somehow elected President. So it was a tad hard for me to see a story about his political twin, Hitler. 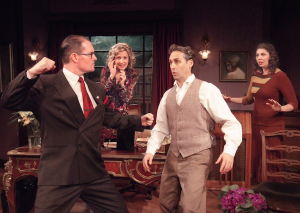 Shawn Savage, Melanie Chartoff, Brian Stanton, and Laura Lee Walsh. Photo by Ed Krieger, as is the big one at the top of the page.

But the storyline, and dialogue, are just perfect for today! And, even though it’s not a true story, I learned so much about old-time Hollywood. I thought I knew a lot of film history, but this play was indeed an eye opener.

The Consul, The Tramp, and America’s Sweetheart is a fictionalized account of the Nazis trying to stop Charlie Chaplain from producing his controversial first talkie, The Great Dictator, because it makes fun of Hitler.

The story is based in reality, though. The action takes place in 1939, on the eve of World War II, so it is possible that the Nazis did have a consul to Hollywood. And Mary Pickford and Charlie Chaplin were two of the quartet of United Artists founders, so perhaps the negotiations portrayed in the play did happen. Who knows? I just have a bit of a hard time with any entertainment that portrays real people, because I never know which parts are true. I have to keep reminding myself that it may all be fictional, except for the names. (I’m still trying to decipher Warren Beatty’s new film, Rules Don’t Apply, which is supposedly about Howard Hughes, and it’s driving me crazy!)

The Consul, The Tramp, and America’s Sweetheart starts off a tad slow, (and stays that way for about the first third of the ninety minutes,) but give it a chance. It picks-up for good when Brian Stanton, (who, as Charlie Chaplin, is the lone stand-out in the four person cast,) shows up. His physicality is really fun to watch, especially in such an intimate theatre, and his performance energizes the rest of the action. 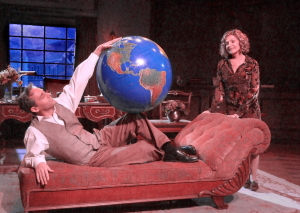 Brian Stanton and Melanie Chartoff. Photo by Ed Krieger. I love that globe!!!

I’m assuming others may classify this play as a comedy, but, especially in light of today’s political climate, I would characterize it as a heavy drama, with lots of laughs. Many of the lines are brilliant! They really resonated with my now politically-depressed self. (Here’s one, said by Charlie Chaplin about why he was making The Great Dictator: “If a woman ruled the world, there would be no need for a film called The Great Dictator-ess!” I hear ya, bro.)

Outside of Melanie Chartoff as Mary Pickford, (who does an admirable job after stepping into the role on very short notice, although she inexplicably affects an English accent for the Canadian actress,) this is the youngest cast I’ve ever seen at Theatre 40, so the new blood is refreshing. I always applaud that this theatre produces plays with so many roles for “mature” actors and actresses, but it’s also good to see them occasionally cultivate a younger generation of talent.

Everyone in this country, not just the Beverly Hills area in which the theatre is located, should see this uber-relevant play. And, outside of the politics, I hope it inspires audience members to research Chaplin and United Artists, in general, and this period in history in specific. I’ve spent many hours doing just that in the days since I saw The Consul, The Tramp, and America’s Sweetheart, and it’s all been fascinating. I thank Theatre 40 for bringing this new knowledge into my purview.