Trending
You are at:Home»THEATRE»THEATRE: THE BOOK OF MORMON
By Karen Salkin on February 21, 2020 · THEATRE

THE BOOK OF MORMON

Yes, I am the one person who’s never seen The Book of Mormon before. So I wanted to see it so much by now that I gave up four other lovely invitations for the same evening to attend this show’s opening night at the Ahmanson Theatre. And the verdict is…I’m so glad I did! 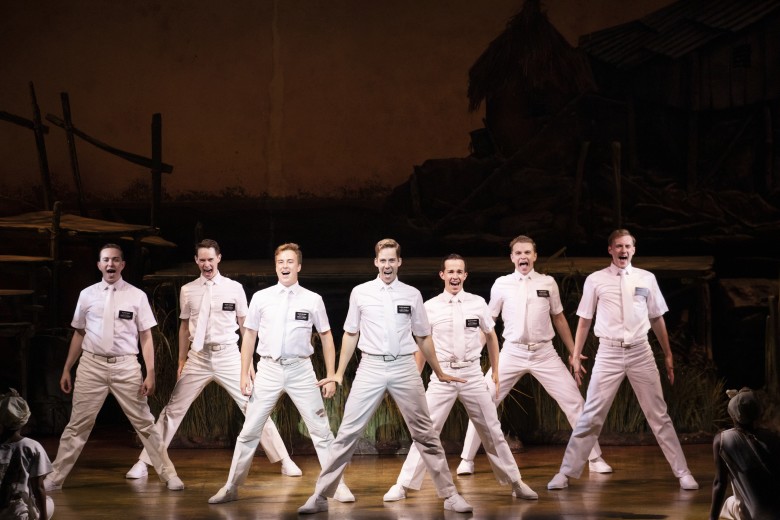 Photo by Julieta Cervantes, as is the one at the top of this page.

Now that I’ve had some time to reflect on the experience, I am a tad surprised that I enjoyed it so much. This is far from what I usually find funny, and much of the scenario is what I would, more often than not, deem offensive. It’s hard for me to laugh at the discussion of raping babies (and frogs!,) and seeing someone be shot right in the head. But somehow, I was able to get past all that, and and just get into the entertainment of the musical numbers and the excellent performances of this cast of the National Touring company of The Book of Mormon.

But thinking about it now does bother me a bit. So consider this your warning of just how irreverent this musical is. If you’re not a fan of people dancing around singing “FU, God!,” this is not the show for you. And despite all the positives of this production that I’m about to laud in this review, and although the ads make it appear to be family-friendly, definitely do not take the kids to this one! (And even make sure that the grown-ups know what they’re getting into.) 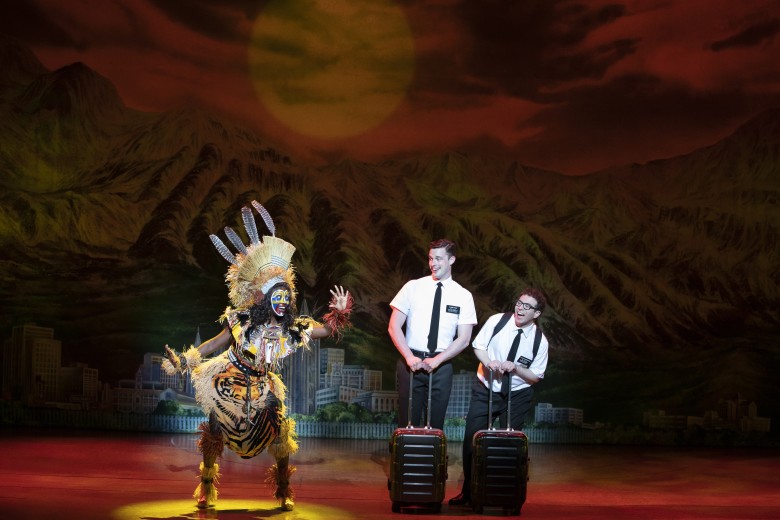 I’ve never watched South Park (whose creators Trey Parker and Matt Stone, are two thirds of the team who wrote the book, music, and lyrics for this show, along with Frozen’s and Avenue Q’s Robert Lopez,) because sophomoric humor doesn’t interest me. But it’s somehow acceptable here.

That might be because of the perfect crispness of every aspect of the production. It’s quite the interesting team that put this show together! I’m guessing that most theatre newbies (meaning not the usual theatre-goers) who flock to The Book of Mormon are fans of either South Park or Frozen or both, (which is very strange dichotomous animation group.) But I was interested in seeing it because I’m a major fan of…director/choreographer Casey Nicholaw! The first Broadway musical for which he served as both director and choreographer, The Drowsy Chaperone, is in my Top Four shows of all time! I perhaps never laughed so hard as the first time I saw it, from the opening dark-theatre moment to the very last second. And Casey also directed and choreographed what became my all-time favorite show just a little over two years ago, Something Rotten! That man is a genius! [Note: A big thank you to the Ahmanson Theatre for bringing all these presentations to us Angelenos; I don’t know what my continuing theatre education would be without them! I mean it.]

Okay, back to The Book of Mormon. No, it will not land on my Top Any Number list, but I did enjoy it. A lot. Even I’m surprised about that because I’m so sensitive to the plight of peoples around the world that I usually can’t find any of those topics acceptable as a source of humor. But this show somehow won me over, and I found myself laughing a lot in spite of the painful topics. I think that’s because the production is soooo excellent, on every musical-appropriate level.

In case you don’t know what the The Book of Mormon is about, there’s no brief way to explain it, but this about sums-up the plot: A couple of young Mormon missionaries are sent to Uganda to try to baptize the locals into the church of the Latter-Day Saints. Mayhem ensues. And everyone sings and dances exceptionally! Part of it even reminded me a bit of the presentation of Uncle Tom’s Cabin in the middle of the The King and I. Only very skewed. 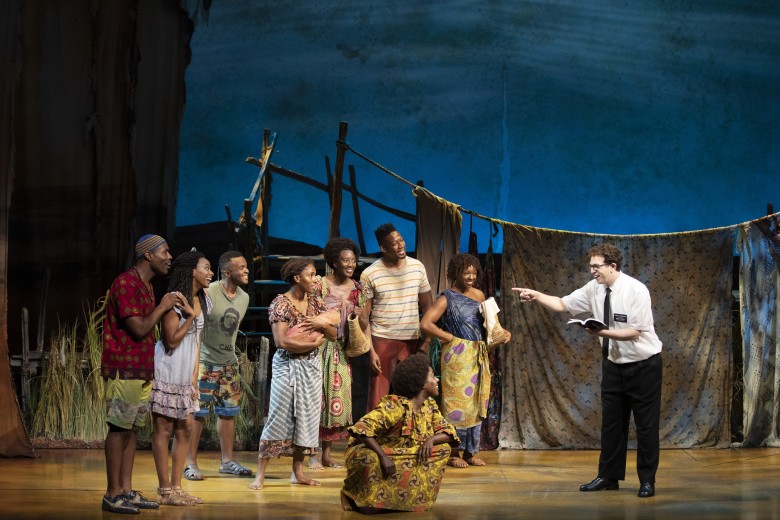 There are so many clever Casey Nicholaw touches. You cannot look away from the stage for even one second or you might miss something fun. And the musical numbers are all brilliant; I’d expect nothing less from him.

While all the actors are really excellent, (especially the two main missionaries, Jordan Matthew Brown and Liam Tobin, and another one who’s already in Uganda when they arrive, Andy Huntington Jones,) it’s the fabulous singing of Alyah Chanelle Scott that I appreciated the most. This is her first big gig, and I predict big things for this young lady, so get in on seeing her now! (“Young lady”? Did I just turn into my mother?!) 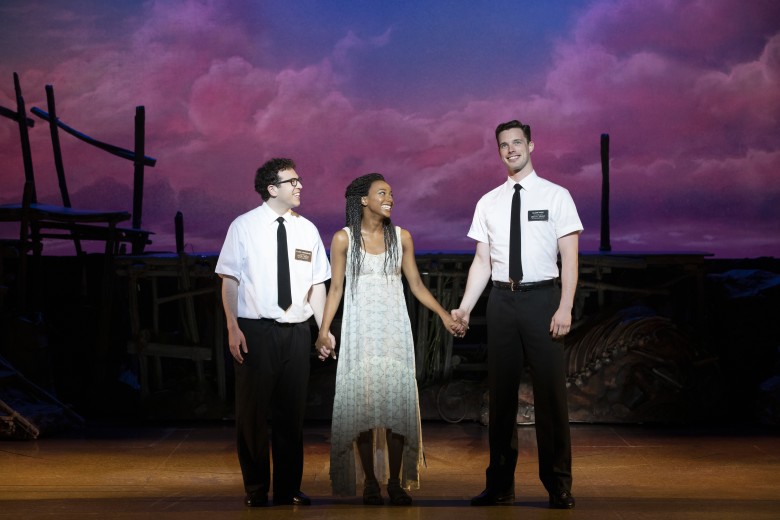 And I could listen to Corey Jones, who plays the evil General, speak all day; he has a great voice.

I also admired Scott Pask’s very colorful (which is just the way I like it) set designs, along with the costumes by Ann Roth. I’m so glad that my friend, Marc, with whom I shared this opening night, pointed-out the Mormons’ new ties in that last scene! What a brilliant little wardrobe touch!

Marc had actually seen The Book of Mormon at another theatre in town in recent years, and told me that this production is waaay better. I heard people discussing it at intermission, as well, and they deduced that the fabulous sound system at the Ahmanson gets a lot of the credit for making it so.

All that being said, I feel that The Book of Mormon should be somewhat shorter. It starts to get a bit repetitive in the second half. But, since it’s been running on Broadway, (where it won nine Tonys,) since 2011, it’s not going to change now, so just bare with it. 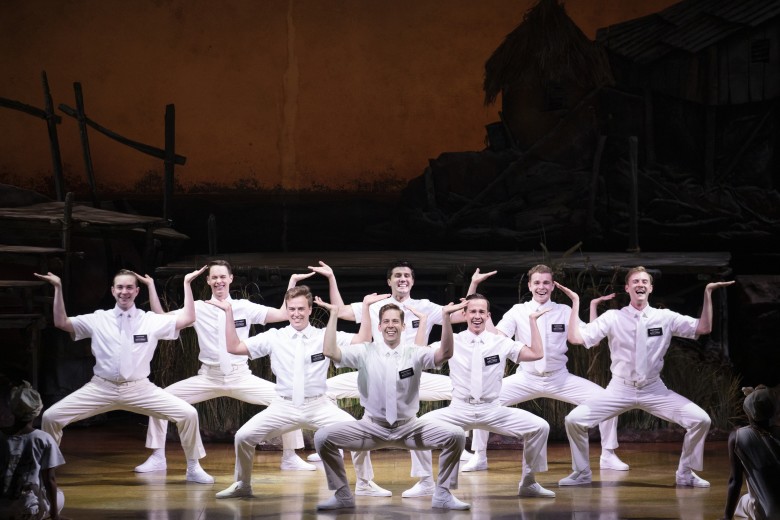 Even though I don’t ever let the reactions of others dictate my own, I really enjoyed sharing this experience with such an enthusiastic opening night audience! I have a feeling that all audiences for The Book of Mormon will be that way, so you all will get to know what that’s like, too.

And here’s some great news so you can also be one of those happy audience members: For this run, the Ahmanson is offering both a lottery for incredibly low-priced tickets, as well as an excellent deal for show business guild members. (All that info is on their site, the link to which is in the info below.)

Lastly, (and not part of the official The Book of Mormon review,) I have one little plea to all Los Angeles theater-goers, especially the people who visit the Ahmanson: Please stop dressing like slobs to the theatre! This was opening night at the classiest venue in Los Angeles, and I could count on my hands the ten of us who were dressed appropriately. That’s really shameful for the denizens of my beloved city. Even the black-slack-and-white-short-sleeved-shirt-clad Mormons were dressed better than most of the audience! And that’s saying something.