Trending
You are at:Home»THEATRE»THEATRE: SISTERS IN LAW
By Karen Salkin on October 3, 2019 · THEATRE

Sisters In Law at the Wallis is well-nigh the perfect show! And this just might be my shortest review ever; I don’t have much to analyze for you with this one. (And sadly for me, nothing to mock.) All I really have to say is: go see it!

It’s the story of the relationship between the first two women on the Supreme Court, Ruth Bader Ginsburg and Sandra Day O’Connor. Though not of the same mind politically, they are bonded in sisterhood, hence the very clever title. [Note: I know that it’s just a play on the word “sister-in-law,” because these are females in the field of law, but I hope that it somehow magically makes people realize that the correct term for more than one sister-in-law is “sisterS-in-law.” And so on down the line with all persons-in-law.] 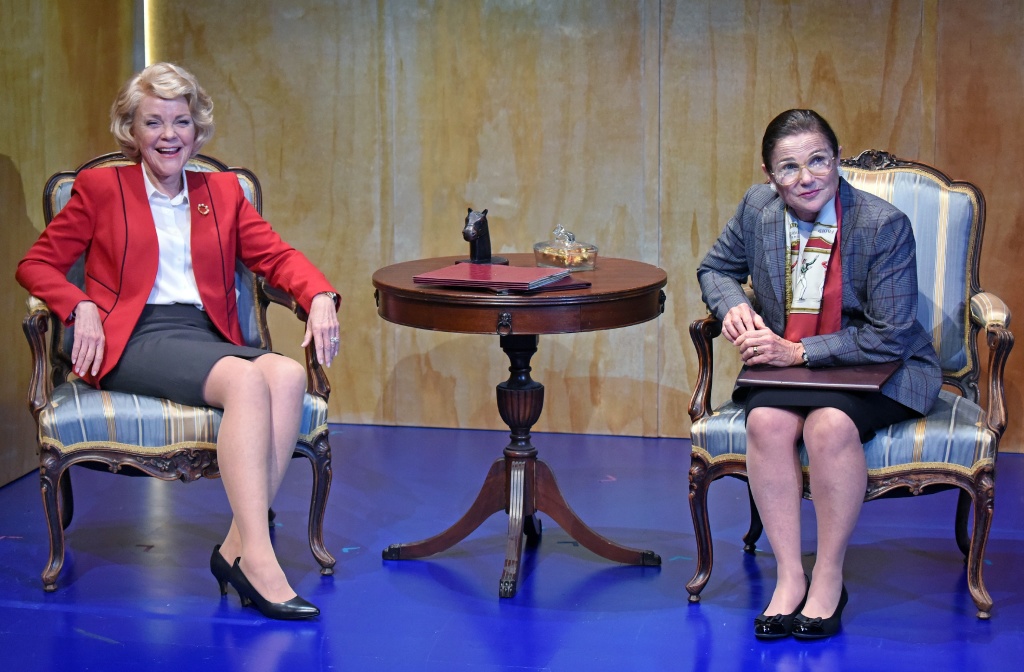 Stephanie Faracy and Tovah Feldshuh. Photo by Kevin Parry, as is the one at the top of this page.

Everything about this play is spot-on. The perfect combo of elements brings us this very important topic—playwright (and former lawyer) Jonathan Shapiro; actresses Stephanie Faracy and Tovah Feldshuh, (who look just like the justices they’re portraying!,); director Patricia McGregor; set designer Rachel Myers; projection designer Yee Eun Nam; The Wallis being the theatre presenting this production; and even the location of Beverly Hills. It all works like just about nothing I’ve ever seen before.

One of the very few notes I jotted down as I watched Sisters In Law was that “someone very intelligent, knowledgeable, and aware wrote this! He or she needed to do soooo much research.” Well, it actually came from the brains of a duet of creative people; the two-character play is based on Linda Hirshman’s book, which is a dual account of the careers of those important, ground-breaking jurists. And then it was adapted for the stage byJonathan Shapiro, who, in addition to being a lawyer and law professor (at UCLA, so yay!,) wrote and produced, (among many other shows,) the mid-aughts series Life, which I was possibly the only person who watched. And that viewing was not just because I went to their premiere party, (which I was partly responsible for putting together.) I really liked it! So I guess I was already a fan of Jonathan’s work. (He works on one of my other faves, The Blacklist, as well. What a varied career he’s had!) 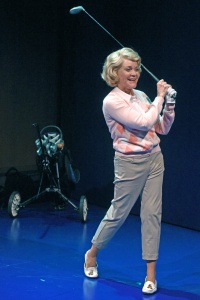 By the way, both Ginsburg and O’Connor are still alive and in their eighties! Sandra retired a long time ago, but as I would assume everyone knows, Ruth is still out there fighting the good fight. She, thank goodness, refuses to go down. She’s trying her hardest to stay on the Court until we get a normal president again.

Here’s the little I have to say on the actual show; you just have to experience it all for yourselves:

The entire experience is entertaining from the get-go. As you walk into the Wallis’ Lovelace Theatre, all you see on the stage is two judges robes. They turn-out to not be a part of the active set, so they’re most likely there just to give the audience something to look at as they get settled, which is thoughtful.

The always-moving set is quite clever, and the projections on the walls, showing the time and place, are most helpful. The varied music throughout, that goes with each time frame, is also a plus.

There are many wonderful and memorable lines, all the way through, but these two stood-out to me: 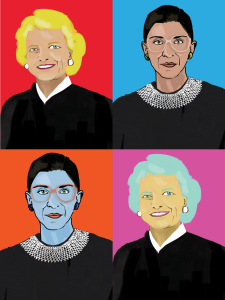 The program art for Sisters In Law at The Wallis.

The first one, “The country has survived bad presidents so far!,” delivered by the Sandra Day O’Connor character circa 2012, got a very knowing laugh/groan from the audience I saw it with. It was a sad jolt back to today’s reality.

The one that really got to me personally, though, is from Ruth Bader Ginsburg’s character, about her relationship with O’Connor. She says, “When I need her, she’s there. That’s how sisters work.” But, let me tell you, you can’t prove that by me! However, that’s another story–a Stephen King one!

But back to the happy stuff. What an important time this is for this play. I doubt it will open the eyes of anyone who helped ruin this country by voting the wrong way in the last Presidential election, but one can always hope. And maybe it will spur-on someone normal to do more to bring about a positive outcome next go-round.

And no matter what, this show is a great way to teach, through wonderful entertainment. I really wasn’t even noticing how much I was learning from Sisters In Law; the knowledge just seeped into my brain. In all the research I do for just about every of the almost two thousand columns I’ve written for this e-zine, (not to mention things I look-up every day just for the hell of it,) I’ve never once in my entire life looked into the Supreme Court of the United States. But after this show inspired me to do just that, I could now run the category on Jeopardy! And in the more difficult Double Jeopardy round at that!

Of course, I was already a fan of Ginsburg, but I learned so much from Sisters In Law. I’m sure that most, if not all, of the actual dialogue is imagined, but the sentiments and ideas behind the lines are all authentic, which really helps break-down history for us. 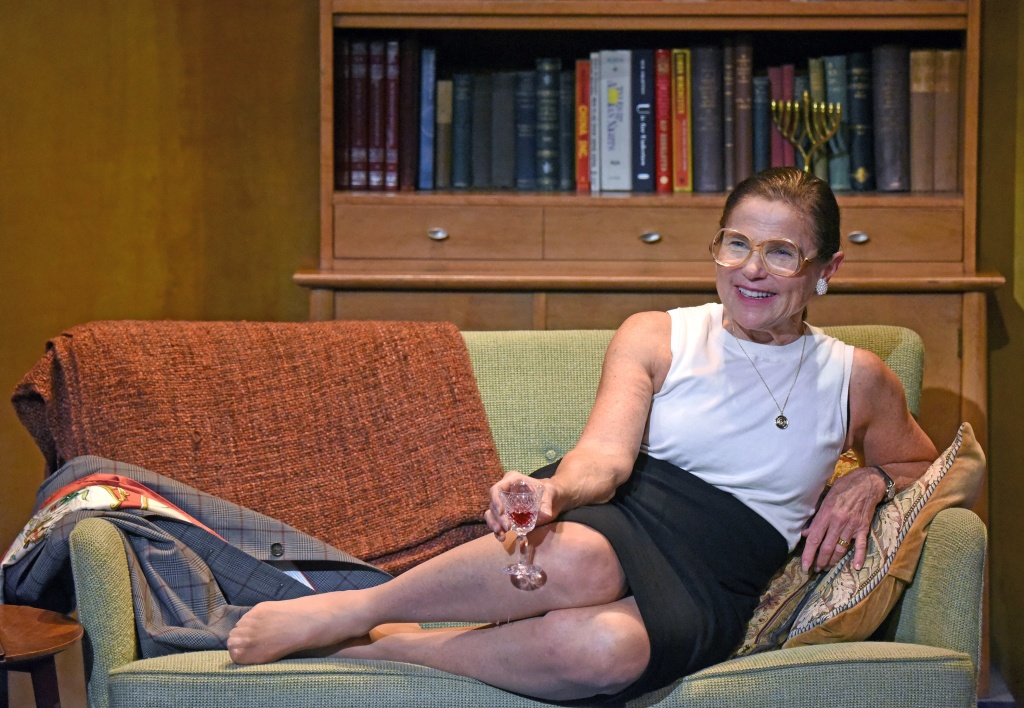 What a dichotomy this show is; the account of these two women show how far this country has come in the past almost-three decades since Ginsburg became the second female Supreme Court Justice, but that progress also makes us realize that we’re still going through much of this shamefulness all these years later.

But without the two spot-on actresses, it might all be for naught. I can’t imagine any other women being more perfect for each role. These ladies have soooo many credits, yet I was barely familiar with their previous work, which kind-of worked in their favor—they were just the characters to me. I actually don’t remember ever seeing Stephanie Faracy before, and Tovah Feldshuh only twice—in recent years, as the Crazy Ex-Girlfriend’s mother, and as Liev Schreiber’s mother in one of my favorite films of all time, 1999’s A Walk on the Moon. 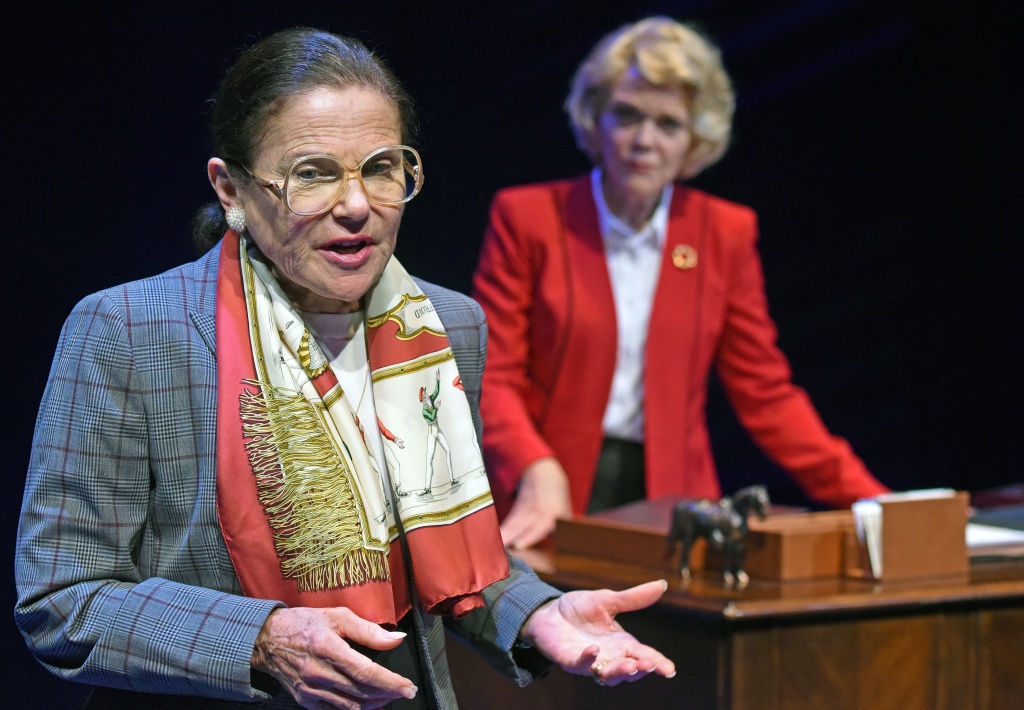 And I must laud the powers-that-be for something extra—for once, we get a production that’s just as long as the program says it is! That’s pretty rare these days. But in all honestly, if someone else hadn’t mentioned it after, I wouldn’t have even noticed that because I did not look at my watch even once during the performance! Time just flew.

I have been raving about this show not just in this review, but from the second I left the Wallis that night! Do not miss it, no matter your political leaning!