Trending
You are at:Home»THEATRE»THEATRE: SHREK, THE MUSICAL
By Karen Salkin on October 24, 2018 · THEATRE

I can’t believe it’s taken me so long to see Shrek, The Musical, and I really thank 5-Star Theatricals for not only bringing it to us Southern Californians, but also for making it such a phenomenal production! I actually wanted to see it again right away! (And Mr. X, who doesn’t like to go anyplace, seriously asked which night we should go again! How’s that for an endorsement?!) 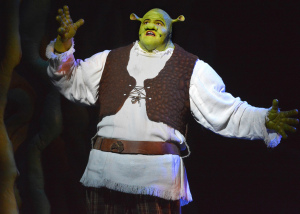 Trent Mills. Photo by Ed Krieger. (Photo at the top of the page by Karen Salkin.)

There are just a few performances left, and it’s the perfect week-end-before-Halloween entertainment. So if you’re even within a couple of hours of the Thousand Oaks Civic Arts Plaza, do yourselves a favor and see this show! It’s the best thing I’ve seen in a few years, and, as my regular readers know, I see everything!

And, as I said, it’s not just my recommendation; Mr. X loved everything about this show, as well. When I told him afterwards that it was running for something like nine performances only, he was shocked. He said it looks like it had already been running for a year because the production is so polished and professional. 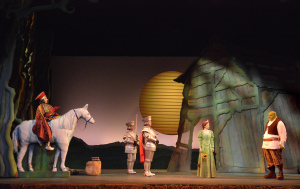 First of all, some thoughts about Shrek, The Musical, in general. How have I never seen this show before?! It’s exactly up my alley! And now that I have, it’s definitely moved into my Top 3, which is sooo hard to do. (In case you’re curious, it moved right behind Peter Pan and The Drowsy Chaperone, and knocked Beauty and the Beast down to fourth. Do you get the idea I enjoy only happy shows?)

This musical is charming, clever, riveting, and downright fun! (My favorite line is when Shrek says, “Geez, I’m like a crackpot magnet.” It looks like he and I have something in common.)

I heard myself actually guffawing through most of it!!! Well, when I wasn’t crying, that is. Some of the story actually choked me up. I sobbed all through the Princesses’ song.

And there’s so much to look at! At all times. It’s one of the most colorful shows ever. 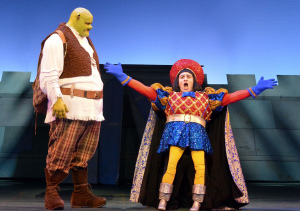 One of the reasons I wanted to see Shrek, The Musical is that I knew how Lord Farquaad is portrayed visually, and I wanted to witness it for myself. Whoever thought of doing him in that manner originally is just brilliant! (If you don’t know, I’m not going to spoil the surprise.) I laughed every time he appeared on stage. And it wasn’t just a one-time amusement; the joke just kept getting better and better. And in this case, Marc Ginsburg brought him to life perfectly. I’ve seen Marc in other roles around town, but this is his best one yet. It seemed like the part was written just for him.

Which brings us to this particular production, in Thousand Oaks. It sparkles from beginning to end! I can’t imagine that Broadway did it better. And you know what? All the actors are so good that no one steals the show. Each person does exactly what he or she is supposed to do. At least one actor annoys me in just about every play or musical I see, for even little reasons, but I enjoyed everyone on this stage. 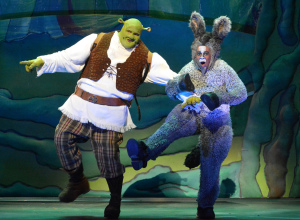 Lawrence Cummings, as the Donkey, and Deanna Anthony, as the Dragon, have powerhouse voices, and Trent Mills, as Shrek, has a charming one. The Princess, Alison Woods, has a crystal clear princess-y voice, which is reminiscent of Sutton Foster. (A higher compliment in the musical comedy world I cannot give.)

But the voice that absolutely knocked me out belongs to young Bayley Tanenbaum, who sings for just a brief moment as the little girl version of the Princess. She’s in 5-Star Theatricals program for youngsters, and I predict a big future for that little lady. 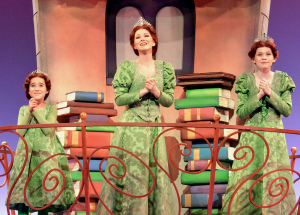 That one number, by the way, of the three Princess Fionas, at different ages, really got to Mr. X. He said the trio sounded like they all have the same DNA! That bit of casting is an especially perfect one.

One wonderful aspect of Shrek, The Musical is the ingenious little touches from other famous musicals that are mixed in. They’re subtle, (like even just a whistle from Shrek, which is a tiny tribute to West Side Story,) but fans of musicals will really appreciate them. On top of those, this particular production has added some more witty little modern touches, which you have to see for yourselves. Which I sincerely hope you do, or you will be missing-out! 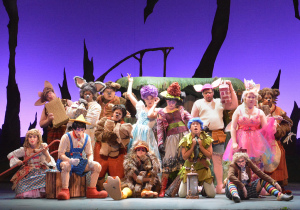 Speaking of missing-out, they did miss an opportunity to add one more little bit of festiveness to the proceedings. Since the pate of the conductor is still very visible to the audience, (I guess they didn’t take my suggestion from my previous review of a show in that theatre, but oh well,) for Shrek, Mr. X suggested that they should’ve given him some little fairytale hat that went along with the story, which would have integrated him into the show. (But for me, I’m just glad that they didn’t give him a hat with points because that would’ve made crazy me even crazier.)

Now, some words about this fabulous Kavli Theatre: Mr. X had never been there before, and could not have been more impressed with it. He said it’s perhaps the most comfortable theater ever, with perfect sightlines, and rows that are designed so that the audience doesn’t have to dodge the heads of people in front of them to see the stage well. And, most importantly, the seats have the best legroom ever! (And this from a very skinny guy!) I agree with all that, and add that they have the nicest personnel, which I so appreciate. 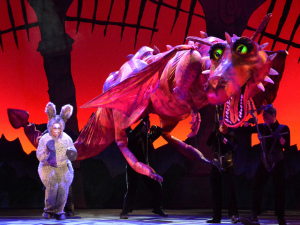 I whole-heartedly thank 5-Star Theatricals for bringing us all the shows I’ve missed elsewhere throughout the years!  And also for making them happy ones.  Enough with all the angst at other theatres! (It appears they will be doing West Side Story down the line, though, which, despite the sadness, is what Mr. X deems the best musical ever made!)

So if you’ll be anywhere in or around the Los Angeles area this coming week-end, and are deciding between Shrek and any other entertainment in town, (including Dear Evan Hansen,) Shrek should win hands down! Please trust me on this one.