Trending
You are at:Home»THEATRE»THEATRE: RIDE OR DIE: THE HIP-HOP MUSICAL, AND MORE SELECTIONS FROM THE HOLLYWOOD FRINGE FESTIVAL 2019
By Karen Salkin on June 21, 2019 · THEATRE

RIDE OR DIE: THE HIP-HOP MUSICAL, AND MORE SELECTIONS FROM THE HOLLYWOOD FRINGE FESTIVAL 2019 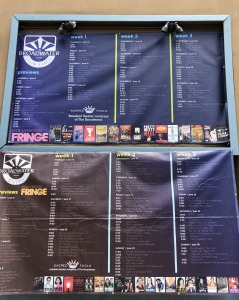 A board outside one of the theatres, listing their shows. Photo by Karen Salkin.

I don’t want to bury the headline here, so before I tell you anything else, I heavily recommend that you see the wonderful hip-hop musical Ride Or Die, and to absolutely stay away from the dreadful Mil Grus! Details on both to follow, but even though I suggest you read everything I have to say here, you should also watch my new video detailing those two shows here: www.youtube.com/watch?v=Pxpjvgl200g.

But first, an overview of the Hollywood Fringe Festival. I never really know how to describe it, but the easiest explanation is that it’s a few hundred short shows that run almost continually in a bunch of venues in Hollywood for the month of June.

Thankfully, they’re all pretty brief–most are under an hour, with some running ninety minutes. Part of the fun is getting to see at least a couple of them in one day or night, with many being within walking distance of each other. 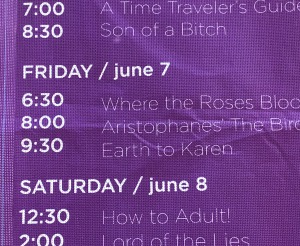 And a close-up of one on the boards which several people have mentioned to ME. Even though a FEW of those titles can apply to me, they’re referring to “Earth To Karen.” Yeah–I get it! Photo by Karen Salkin.

Outside of discovering the marvelous Ride Or Die, (which is the best part of this year’s festival,) I was grateful to get acquainted with the plethora of little theatres in that area of town. I’ve passed many of them in a car before, but knew nothing about them. Each one has something to offer, but my friend Marc says that The Broadwater, (where Ride Or Die plays,) is “like the Academy Awards compared to the others!”

Here are reviews of the four shows I’ve seen so far this year, from best to worst. (But don’t forget to also watch my video because it gives all the juicy dirt on them that just cannot be portrayed in writing! Here’s that link again, in case you’re too time-constrained to scroll up!: www.youtube.com/watch?v=Pxpjvgl200g.)

THE BEST ONE!: RIDE OR DIE: THE HIP-HOP MUSICAL 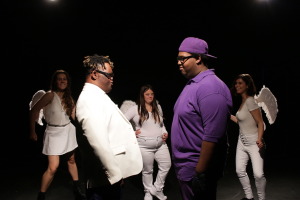 There are only two more performances of this most worthwhile show, and they’re both this week-end!!! So do yourselves a favor and spend that little bit of your day or night seeing Ride Or Die: The Hip-Hop Musical–it will warm your heart! I had a smile on my face the entire time. And laughed through just about all of it.

Besides that it’s a really funny show, with excellent performers, and fun understandable raps, the cast features some artists with Down Syndrome and some with autism, including the three leads. And they’re all better than all the other actors I’ve seen during this year’s Fringe Festival! No lie. (And several of them are on TV series now, so you’ll actually be seeing celebrities!)

Everyone in this show is really good, but especially the two lead guys, Domonique Brown and John Tucker, who are absolutely fabulous. 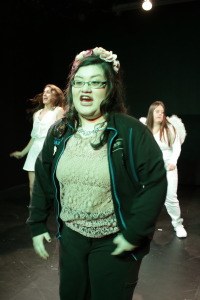 Because of all this excellence, I’m mentioning the names of the entire company, giving special kudos to Conor Hanney, who wrote every single bit of the story, dialogue and music, and who must be the most special guy I’ve ever had the pleasure to meet in my whole life. (Not to mention that he’s adorbs!)

And the beatboxer, Shaun Fisher, who even has a comic acting turn as “God,” keeps the show going seamlessly the entire time. And it’s all directed by Kelsey Goeres.

I’m actually planning on going back to see it again this week-end because I want Mr. X to experience it. I hope to see you all there, too!

For tickets and more info, go to www.hollywoodfringe.org/projects/5881.

THE NARCISSIST NEXT DOOR

This one is okay. It’s a comedy, with a good script by Ellen Buckley, but it’s nothing special. 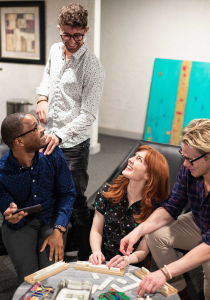 The premise of The Narcissist Next Door is true-to-life, but the action is far from it, (which doesn’t really matter because so many comedy entertainments are far-fetched.) It’s about a narcissistic guy who just barrels his way into the group of pals who hang-out next door to him. (One guy lives there.) And it goes from there, with most of it being very unbelievable. [Note: I know someone who’s also a bit phony and full-of-himself, and I stopped letting him hang around pretty quickly because he was ruining the time of my other pals. There, done! So others can do that, as well.]

The performances are good enough, and there are some laughs along the way. But the wardrobe is worse-than-awful. And, I know these shows are super-low-or-no-budget, but they need to change at least a shirt every now and then to show passage of time. (They finally do that later on.)

But the highlight, for my friend and me, anyway, is the occasional totally-buff half-naked body of Luca Malacrino, who plays the narcissist. That made the who thing worth our time. 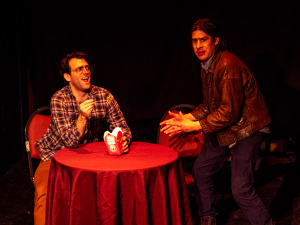 This show is a quartet of vignettes about dating. The good news about Feeling Lucky is that the two guys in it, Eddie Navarro and Spencer Weitzel, are pretty good, and the first skit, which features just the two of them, is amusing.

But it goes downhill from there, mainly because the two females, Courtney Scheuerman and Tarah Pollock, are pretty weak. They stop after every…single..sentence. The one scene between just those two drags on and on. And their wardrobe is so bad that it actually becomes distracting. Who dressed them—the ‘70s!? 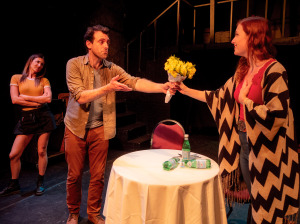 Something weird is that, at one point, Courtney lights up a cigarette, in character, and then pretends to smoke it and put it out, when it doesn’t even get lit! That’s the funniest thing she does all show, although it’s by accident. Clearly she does not take a drag of it, which is absolutely correct of her, so why did the writer and director put that action in there to begin with?! It’s absolutely unnecessary and actually irresponsible in this day and age!

On the plus side is that’s The Blank Theater is a cute petite theatre, with good sightlines from all over. And I appreciated their clever little set changes in the show.

But don’t see this show while hungry or thirsty—every scene takes place in a restaurant or bar. (But if you do get cravings during it, here’s more good news—there are two easy cafes right across the street!)

THE ABSOLUTE WORST ONE!: MIL GRUS

This show was my raison d’etre for my new YouTube video because not only is Mil Grus painfully boring, and did not make me laugh even once, but it also features the absolute most offensive thing I have ever seen on any stage, much less one that labels itself a comedy! It’s hard to describe it in print, (but please continue reading this review anyway,) so here’s the link to my latest YouTube video again, because it contains the pertinent visuals: www.youtube.com/watch?v=Pxpjvgl200g. 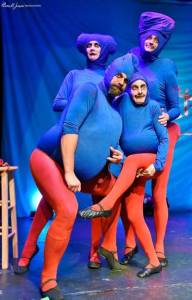 I noticed that someone else referred to Mil Grus as “a waking nightmare,” which is fitting, but it’s even worse than that!

My video explains exactly what this travesty is like, but here’s the worst part: One of the aptly-monikered “buffoons” takes a plastic bag out of her shirt, and puts it over her head, making like she’s committing suicide by suffocation, complete with a terrified face. Then the rest of them go on with their inanity while she lies there, presumably dead. They should be ashamed of themselves! Making light of suicide is the furthest thing from funny, especially nowadays, when so many people, of all ages and in all walks of life, do take their own lives. How does anyone over the age of fifteen not know that?! And how messed-up are the sensibilities of everyone involved with this show???

This sick group of individuals calls themselves “buffoons,” which is actually correct, but not in a good way. They’re taking it to mean “clowning” of a sort, but what they’re really demonstrating is the derogatory definitions of the word, such as these: “a gross and usually ill-educated or stupid person,” “a person given to coarse or undignified joking,” and “an unintentionally ridiculous person.” I could go on, but I think you get the idea. 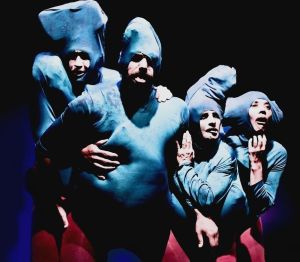 Mil Grus. (See the caption above.)

At one point, the lights in the theater go off for a long while, which I surmised that night was probably so I couldn’t see to write any more bad notes about these blights on society. (Too harsh of me? I think not.)

The good news is that Mil Grus is such garbage that I think I have finally hit rockbottom of seeing bad shows. I cannot imagine anything worse than this drivel.

Besides the horrific suicide bit, all of it is awful! I have honestly seen better shows, by far, by five-year-olds in their living rooms.

Near the end, one of the idiots on stage whispered, (which they probably thought was ironically,) “What does it mean?” My sentiments exactly!

And the show just ends abruptly, with no one on stage, and an announcement, “That’s it. Go home.” Trust me—they did not have to ask me twice!