Trending
You are at:Home»THEATRE»THEATRE: PRETTY WOMAN, THE MUSICAL
By Karen Salkin on June 20, 2022 · THEATRE

Years ago, Mr. X and I used to go to our friend’s private screening room every Sunday to see one of the latest studio movies. They were all pretty serious films, but after Toy Story II, Mr. X stopped me on the way out and told me to look around. And, for the first time ever in that venue, my fellow invitees were all smiling, upbeat, and chatting away with one another! No one rushed out, as they always had before, with their heads down. That taught me the power of a happy piece of entertainment.

And that’s exactly how the audience left the Dolby Theatre in Hollywood the other night after the opening of Pretty Woman, The Musical. 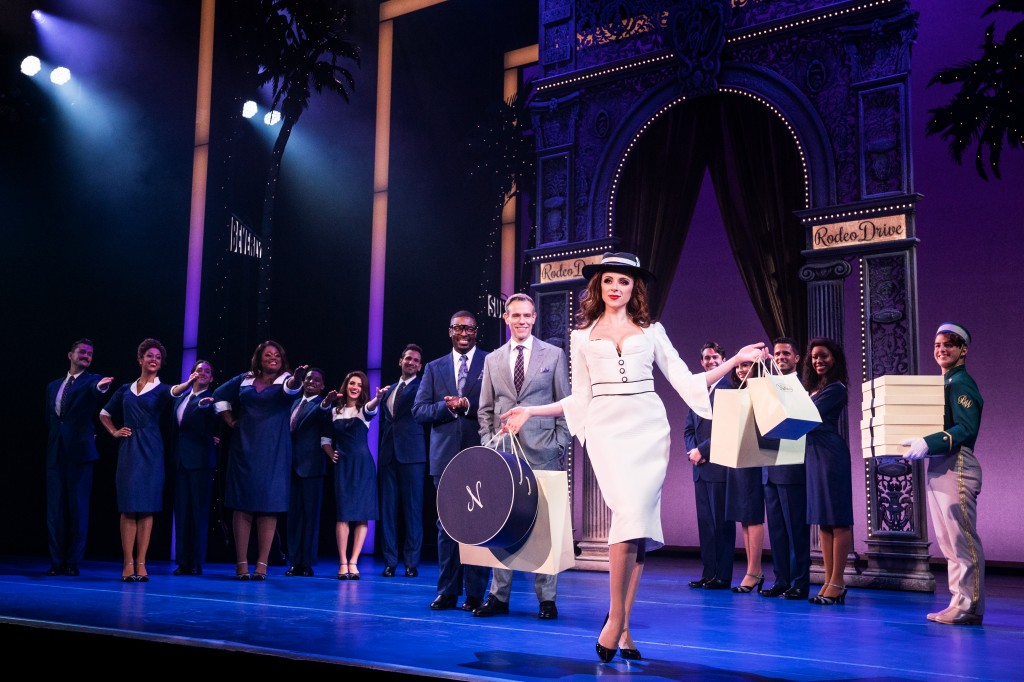 Photo by Matthew Murphy, as is the one at the top of this review.

So, despite its few weaknesses, anything that brings smiles in the middle of these difficult times is okay in my book. While far from being the greatest Broadway musical, Pretty Woman is still one to see. With all the fabulous fashions and portrayals of upscale locations in Los Angeles, the tale pretty much lent itself to becoming a musical.

On a personal note, there are three parts of the story that I’ve always easily identified with. First is that even the title itself is special to me; Pretty Woman is my song with my longtime beloved car. When I drove it off the lot all those years ago, I said whatever song comes on first will be my theme song. And it was, indeed, Roy Orbison’s Pretty Woman! (I still thank the dealer for leaving the radio on an oldies station.) I’ve loved that hit tune ever since. So, engaging in a sing-along of it during the curtain call was a blast. The entire opening night audience loved it!

Second is that, I, too, am one of the few chicks who drives a stick. So I get a kick out of the main character, Vivian, showing Edward how to drive the sports car. [Note: We don’t see her do it on stage, as we do in the movie, of course, but it’s mentioned as what brings them together.]

Third is that I’ve always known how Vivian feels when Edward gives her his credit card to use to go shopping. The first time Mr. X was taking me to an awards show, he sent me shopping for an outfit in Beverly Hills, with his credit card, of course, and in a limo! And he even told me to take a friend along and treat her to lunch on him, too! Let me tell you, that was heady stuff for a young girl from Brooklyn. 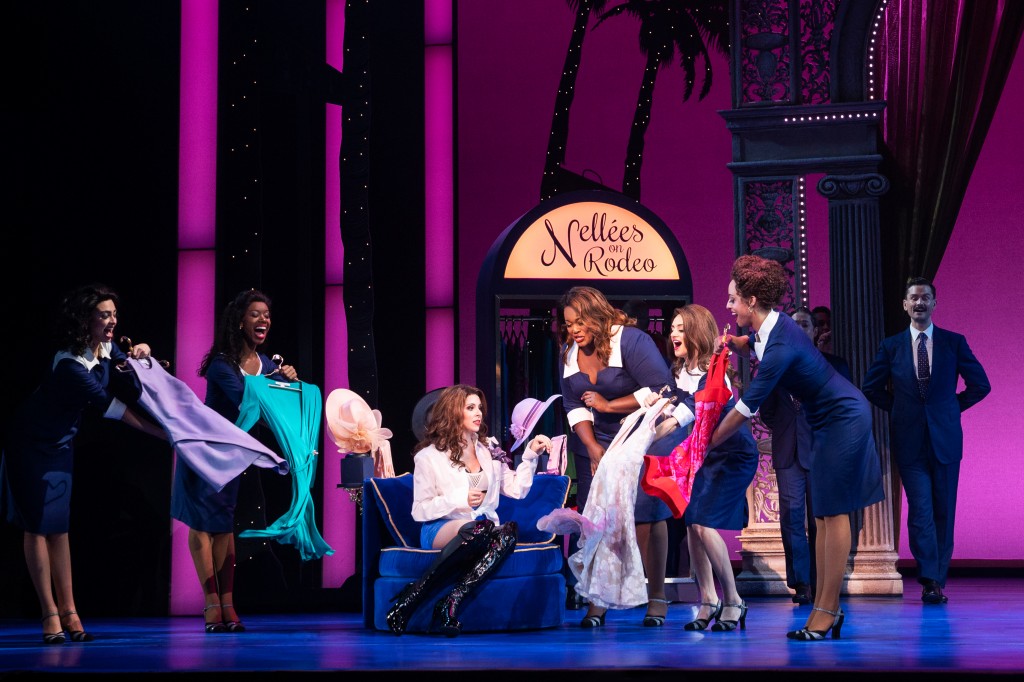 One of the fun shopping scenes. Photo by Matthew Murphy.

As to this National Tour of Pretty Woman, The Musical playing here in SoCal now, I love when something rises from the ashes of the pandemic. This company was supposed to go on tour right before the world stopped in 2020, and that it got postponed until now, rather than just cancelled, with what I believe is the same cast, is a triumph.

And, of course, it’s always a treat to see anything at the iconic Dolby Theatre in Hollywood, especially because they have the best chocolate chip cookies in town!!!

Opening night was made even more special by the presence of Roy Orbison’s family in the audience, along with music icon Frankie Valli, whose granddaughter, Olivia Valli, is starring as the title character. And I loved that every single cast member received a well-deserved rose at the curtain call. 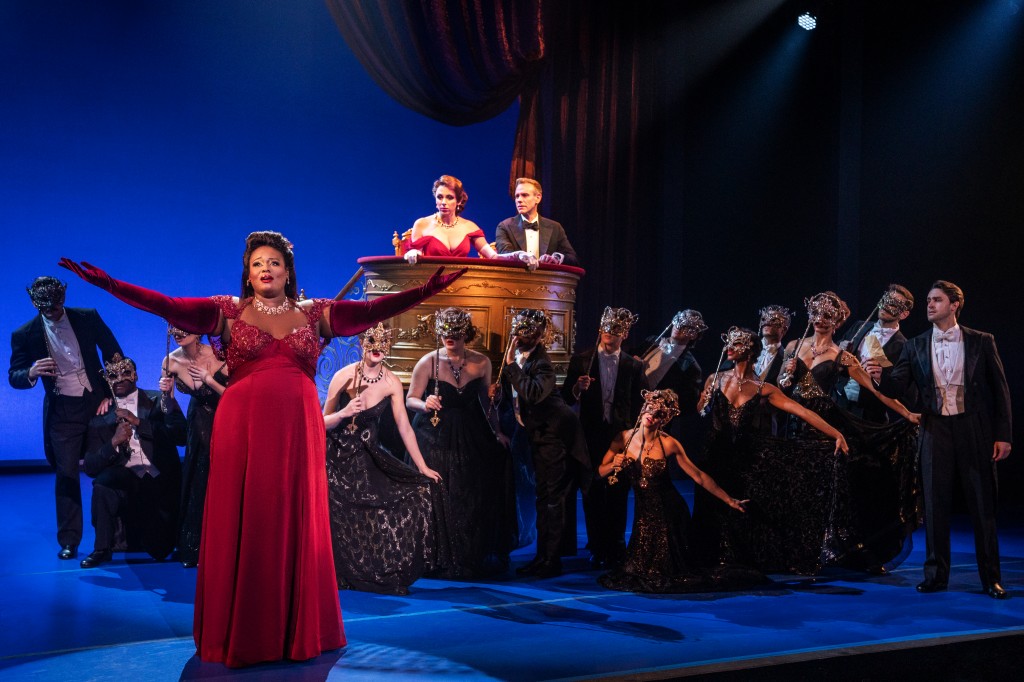 The performances are all excellent, but there are a few stand-outs, most notably the two opera singers, Amma Osei and Christian Douglas, in Act II. I wish they had sung more, actually. They literally made me want to see a full-length version of that art for the first time in my entire life, especially if those two are in it!

Then we have Trent Soyster as the Bellhop; he brings such a spark every time he appears. He’s adorbs! And Jessica Crouch who plays Vivian’s best friend and confidant, Kit, has a powerhouse voice and an absolute abundance of energy. Kyle Taylor Parker, in multiple roles, (which gets more and more amusing as the show goes on,) is really good in all of them! The scene of him as the hotel’s manager teaching Vivian how to dance is a hoot and a half. 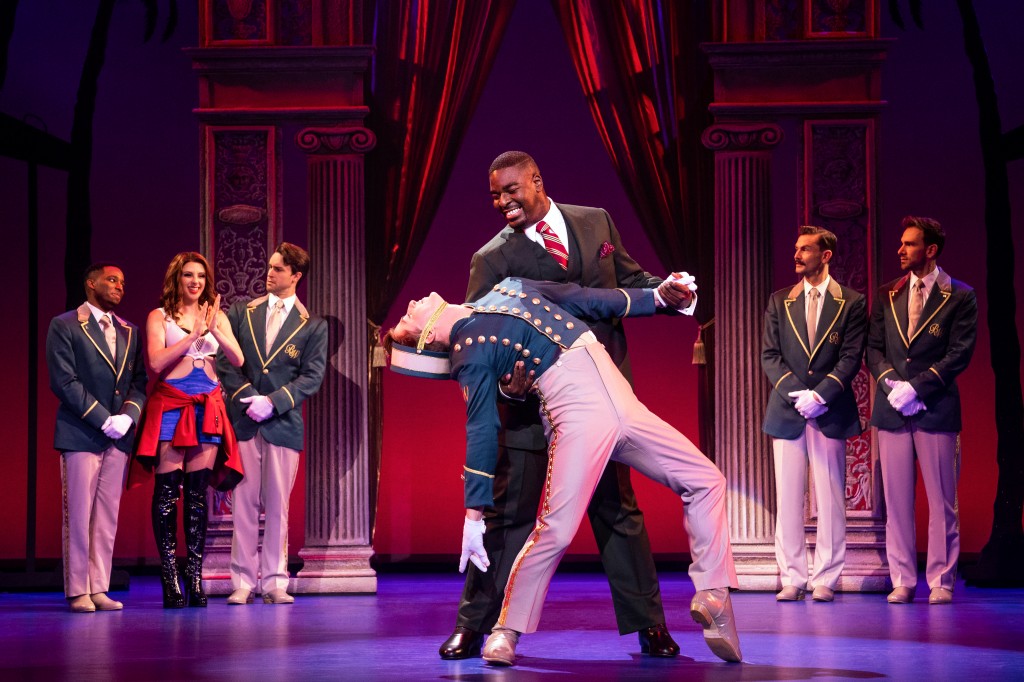 The most fun portion of the presentation for me is the fashion section, of course. It could go on much longer, as far as I’m concerned.

To delve deeper into the fashions, I watched the Pretty Woman movie the next day, and I was glad to see that the musical really does copy some of Vivian’s main outfits, like the hooker one she has on when we first see her, and the iconic red dress in the opera scene; I’m sure audiences appreciate the familiarity. 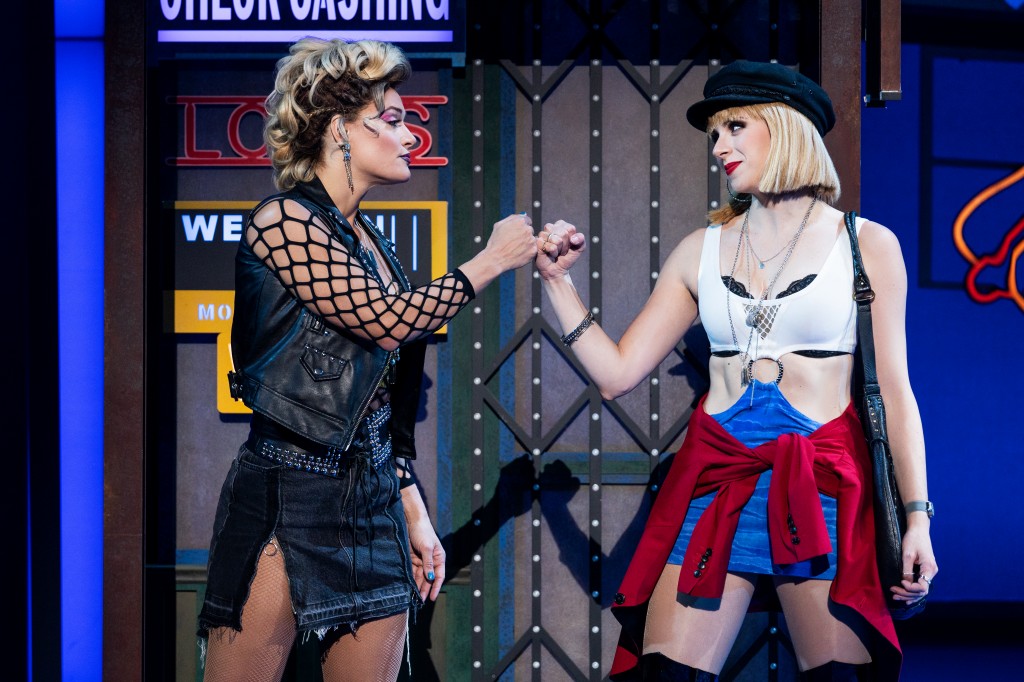 Of course, every production has its shortcomings; my friend and I spotted a few in this one. But despite them, I suggest Angelenos see this entertaining show, while we have the great opportunity afforded us by Broadway In Hollywood. Pretty Woman, The Musical is an excellent diversion from all the horrific news in the world these days. So just enjoy it.

I think the main problem is with the writing. Even though most of it is taken directly from the movie, the 1990 story just doesn’t play well in 2022. Perhaps they should make it clear somehow that this takes place in the ’80s, rather than with just one little sentence in the program stating that the setting is “Once Upon a Time in the 1980s.”

And the songs, by Jim Vallance and, surprisingly, long-time rock musician Bryan Adams, are all pretty mundane; there’s not a memorable one in the bunch. Poor “Edward” gets saddled with just slow, mournful, yearning ballads, rather than showstoppers. 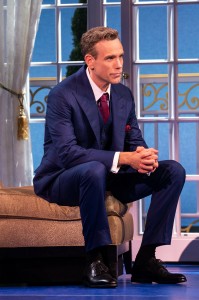 Speaking of Edward, Adam Pascal, who plays him, has a lovely voice. But the script does him a slight disservice in the second act by having him do a number with the two opera singers. I think any voice would seem weak up against theirs.

The show is so much more dynamic when it’s the other characters performing rather than the two leads, due to no fault of their own– it’s because of the songs they’ve all been given.

There’s also a lack of chemistry between Pascal and Olivia Valli as Vivian, which might be due to their age difference. In the film, though Richard Gere was forty at the time and Julia Roberts was only twenty-three, they looked closer in age than that. But in this musical, the duo, at twenty-two years apart in real life, look more like father and daughter.

Valli’s age is fine, by the way, but there’s a strange bit in the script about the character, which my friend pointed-out. It’s not a big deal, but Olivia sounds exactly like Leah Remini or someone else who’s from Brooklyn. (She sounds so much like Leah, in fact, that I had to actually look through my binoculars a few times to ascertain that it was not her!) Hey—there’s absolutely nothing wrong with sounding like you’re from my hometown! It’s actually often a bonus in comedy! The slight problem is that the character says she’s from Georgia. So that part is confusing. It seems like the writers were sticking to the movie exactly, and Julia Roberts herself is from Georgia, so I assume that’s why the movie script has her say that bit. But they should change it for the musical, to match whatever actress is playing the role, if she has a distinct regional accent, as Olivia does. In this case, the character can mention she’s from “a small town in New York,” or New Jersey, if they even feel the need for that one line at all. 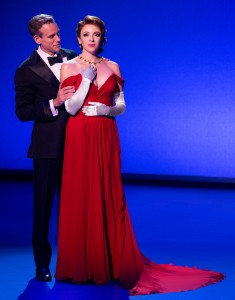 One teensy tiny bone of contention for me is that copying the movie’s famous (and unscripted, which is a really fun story you should look up sometime,) closing-the-necklace-box-on-Vivian’s-hand is unnecessary—even though it’s just one second long, it comes off as too forced. But I’m sure if it had been left out of the musical, others would complain about missing it. So I’m wondering what other audience members think about including it in the musical.

But those little issues aside, I say to just take Pretty Woman, The Musical as the colorful fun that it is. Leave your problems at the entrance to the theatre and then just smile your way home.