Trending
You are at:Home»THEATRE»THEATRE: PALOMA
By Karen Salkin on June 4, 2015 · THEATRE

[Note: This is one of my yin-and-yang reviews, with a lot of parts to it, so please read it all, especially to find out why I loved the music and set so much.]

As I was watching Paloma (which opened at LATC last Saturday,) I didn’t think I cared much about it. (That was perhaps due to the not-yet-polished performances, but I think it had even more to do with the uncomfortable seats.) I found myself concentrating more on its faults.

But, as the week-end went along, I realized that the play was actually pretty thought-provoking.  My basic, all-inclusive life makes me forget that there are really situations like this one, not only throughout the world, but in my own little orb. 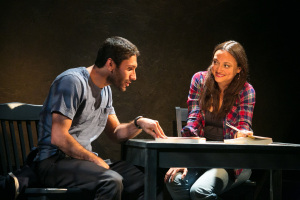 The story is primarily about the modern-day forbidden love between a Muslim boy and a far-from-practicing Catholic girl.  It made me realize that travesties like this do still exist in the world, and gave me an even bigger appreciation for my freedoms in that category.  Interfaith love has never been a problem for me, and my parents were always great about my choices in men, no matter their race or religion.  (But if they had bad grammar, or dirty fingernails, that was a different story! Actually, for me, as well!)

But I was a tad taken aback in high school, when my boyfriend at the time, who was Jewish, told me that, if we got married one day, we couldn’t have a Christmas tree!  Since I’m Jewish myself, my fam had never had one, anyway, but I loved them, and definitely didn’t want that possibility taken away.  I couldn’t believe that someone who was just a few years older than I could think that way! [Sidebar: My boyfriend now, with whom I’ve lived for a wonderful eternity, is Catholic, and we’ve always had both a Channukah menorah and a Christmas tree for those holidays. One year, he was worried about the lit candles being a fire hazard, and asked to opt out of the menorah that year. I sternly told him that we have a tree for him, so I get to have a menorah. He shockingly replied, “What?! We don’t have the tree for me! You’re the one who insists on it! I hate the hassle!” He was correct. This Jewish girl insisted on a Christmas tree every year. Oops. My bad.]

And even today, I have several girl friends who have to marry within their faith, for their families’ sakes, not their own.  These girls can wear tiny dresses, go to clubs, and whip their great hair around, but can’t date whom they want.  It’s all so very shocking to me.  I can never understand religion holding two people in love back from being together. I seriously can’t. 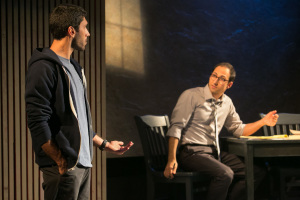 So, this basic premise of Paloma is far from fictional.  And it’s presented as sort of a mystery, so that makes it more interesting.

There are only three characters, but two of them also portray their own parents for a scene.  The funny thing is that the acting of the female, Caro Zeller, was so much better as the mother than it was as the titular Paloma!  (And—I tell you this as one who’s admittedly obsessed with clean hair–my friend and I were puzzled by her less-than-fresh coif, especially on opening night.  We thought that would somehow tie into the mystery, but when it didn’t, it was just distracting, especially because the male character kept mentioning how much he loved her tresses.  It is really good hair, so, since the style had nothing to do with the story, the actress should show it off to its best advantage.)

The acting of all three of them was acceptable enough, but I just needed more out of them. As the Muslim guy, Ethan Rains just never seemed distraught, which I felt the character would be. Jesse Einstein, playing the lawyer pal, gave the best performance.

Speaking of the lawyer, he was supposed to have gone to school with the other guy. So, why were the couple in college shortly before the lawyer was needed? Did he graduate college, and be a lawyer without going to law school? That time frame was confusing. Plus, all the actors looked to be in their mid-thirties, so how was the couple just in college? (It could be that I missed that explanation in the script. And I’m sure no other audience members paid those possible discrepancies any mind.) 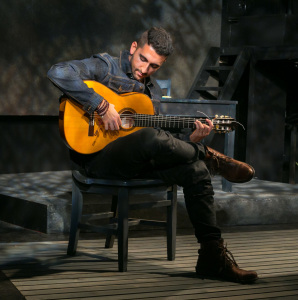 There are two elements of the presentation that I was very impressed with.  There’s Spanish guitar music throughout, composed and performed admirably (off to the side) by Surenna Saffari.  It was beautiful, and significantly added to the presentation. And the Ann Sheffield-designed set, though purposely sparse, is perfect.  It affords the actors so many different areas and surfaces to use in such a small space.  Many different locations are portrayed within it, and we could picture them all. What a truly utilitarian set it is!

One practice I did not like is the theatre’s new use of electronic programs.  I know it’s an attempt at saving paper, which I’m all for, (possibly more than anybody–I even recycle gum wrappers!,) but people are attached to their mobile devices enough!  Many of us go to the theatre to escape that!!!  (Now, when we ask rudesters to please stop looking at their phones during the show, they have the excuse that they were just reading the program.) And, believe it or not, some people don’t even have smart phones!!!  If the theatre wants to conserve, they can always put a recycling bin at the door. [Note: Some actors, (and parents and even audience members,) like to keep souvenirs of their work. This new practice is making that impossible. I pray it doesn’t catch on.]

But, there was a lot of fun attached to the evening. I’ve been to LATC only twice, but I was treated to lovely and varied post-show receptions both times. Last week, after the opening night performance of the incredible Andre and Dorine, (that plays in one of the other theatres in the LATC complex, and is also under their Latino Theatre Company umbrella,) there were classy offerings of champagne and chocolates. They upped the ante this week with a fresh taco bar, complete with rice, beans, and all the delicious trimmings, catered by Tacos Cristo Rey.

But my favorite part of Paloma‘s opening night, (yes, even moreso than the yummy tacos!,) was meeting my three New Best Friends, Jose Dault, Garbine Insausti, and Edu Carcamo, the trio of Spanish geniuses who created and perform Andre and Dorine. Even with a partial language barrier, we laughed into the night. Those three are as amiable as they are creative!!! (In case you missed my absolutely glowing review of that marvelous piece of theatre, you can read it here: itsnotaboutme.tv/news/theatre-andre-and-dorine.  It’s the last weekend for that show, so please don’t miss it!)