Trending
You are at:Home»THEATRE»THEATRE: MYSTERY OF LOVE AND SEX
By Karen Salkin on February 22, 2016 · THEATRE

MYSTERY OF LOVE AND SEX

If you’re looking for some good laughs (not to mention clarity about race, sex, and family dynamics,) look no further than The Mystery of Love and Sex at the Mark Taper Forum.

Despite being way too long, this play is filled with laughs. I enjoyed most of it immensely, even while being exhausted from my week-end trip to Las Vegas from which I had just arrived home a few hours before, with barely any sleep in three days!

So, that I paid rapt attention to The Mystery of Love and Sex is a real tribute to this production. I really expected to have trouble staying awake during it, but not even extreme sleep deprivation could keep me from constantly laughing out loud. 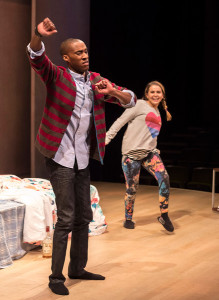 York Walker and Mae Whitman in one of the funniest bits in the show. Photo by Craig Schwartz, as is the big one at the top.

You know that I most often take shows on face value, and not do the old college thesis analysis on them, so that’s what I did here, as well, even though, judging from just the title alone, not to mention the deep personal feelings that the characters displayed on those topics, I’m assuming that most others can go deep on analyzing the show. It has a bit of everything in the way of love, family, friendship, emotions, and sex, and the relationships between and among them all. There’s even some nudity. (But no worries—it’s the young actors, so no need to shield your eyes!) But, as my friend Roz pointed-out, in the end, it’s really all about family, both biological and bonded through love. She said that “each character has to go through something, and then come back.”

All I ever seem to care about, though, is the entertainment factor of a presentation, and The Mystery of Love and Sex has that, in spades. I know there is also a lot of drama to it, but the show is first and last a comedy, to me. And there are a lot of hearty laughs, all the way around. Actually, most of the time, it’s non-stop.

There are really only a quartet of players: a college girl, her parents, and her best guy friend. It’s about all of their relationships, with each other and others, and includes topics such as sexuality, race, and marriage—of all types!

The cast—Mae Whitman, York Walker, David Pittu, and Sharon Lawrence, with a tiny-but-effective surprise appearance by Robert Towers–are all perfect. Props to casting director Meg Fister for her wonderful job of gathering this group. 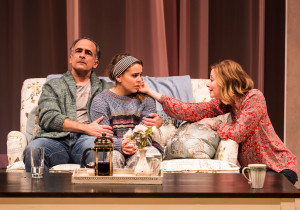 The parents have most of the best lines, so there’s an extra little spark when they’re on stage. But there are so many really wonderful lines in the entire play. I kept trying to remember some of them to highlight here for you, (I was too riveted to the action to take notes this time,) but after a while, I realized there are just too many of them to hold in my head, so you’ll just have to experience all that cleverness for yourselves. (And you’d be a fool not to.)

Speaking of clever, The Mystery of Love and Sex features a sparse but interesting set, although I think it made me a tad nervous for the actors to also serve as the stagehands. It’s a bare stage, and each scene (of which there are many—a tad too many, actually) is represented by just a few pieces of furniture and even fewer props. So, the four actors just move them around between each scene, accompanied by some subtle and appropriate music.

The visual piece de resistance is that each scene features a different single light fixture that comes down from above, to help demarcate the various locations. Well, mostly it is some form of lamp, but occasionally it’s tree branches, and a whole “wow” set of lights for the final scene. I really loved them all, so major kudos to lighting designer Takeshi Kata for all of that.

With all that being said, there are still two tiny little problems for me, (in addition to the aforementioned length of the show. As to that, I really can’t figure out what they should cut, so maybe the actors could just deliver their lines a bit quicker. Only the ones that don’t require great comic timing, of course.) 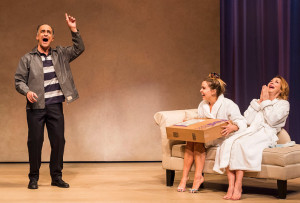 David Pittu, Mae Whitman (am I lying about her second act hair-do?,) and Sharon Lawrence. Photo by Craig Schwartz.

The main one is that, after an hour and a half first act, the second half takes place five years later. So, I assumed that crazy, unnatural length of the first was so that they can use the intermission to age the characters’ appearances appropriate with that passage of time. But I was very disappointed to see that not only did they not get physically aged, on any level, but the only change in that department was to put the young girl’s hair on top of her head like she was about to get in the shower! How crazy is that?! So the only difference on the girl between the ages of twenty-one and twenty-six is that she would be seen looking her absolute worst at all times?! With the same goony hairstyle?! (I think that they may have given her a bit more eye make-up, as well, but that really doesn’t play out to most of the audience. I’m only assuming it because I’m a make-up freak, and am hoping they at least did that!) 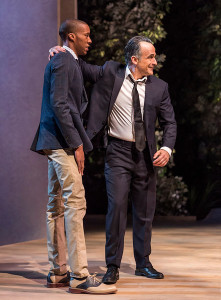 My one tiny other little complaint is that the very end is like playwright Bathsheba Doran (whose name I absolutely adore, by the way, and whose writing is otherwise stellar,) got too tired to come up with an ending, and just told the audience to go home. She missed a perfect opportunity for the mother to remind the young guy pal that he had promised to dance with her on one occasion, and then have the play fade-out with them sweetly dancing. (And me hysterically crying!) [Note: Sorry, but I can’t be more specific than that, to not ruin it for you, but, when you see the show, picture that little bit of ending change, and I swear, you’ll exit more satisfied.]

On the way home, I told Roz I’d like a quick quote from her. She quickly said, “Too much salad,” which made me laugh knowingly. She said it as a joke; we know that was done in the show on purpose, (and if this was one of those college papers I said I’m not making my review into, I’d definitely be discussing that theme!) If my columns had sub-titles, that just might be it. You’ll understand when you see the show. Just don’t go hungry!