Trending
You are at:Home»THEATRE»THEATRE: MATILDA THE MUSICAL
By Karen Salkin on March 26, 2019 · THEATRE

This latest musical production from 5-Star Theatricals lives up to the usual high standard that I’ve come to expect from them.  But the story of Matilda the Musical is a disturbing one.  So I’m torn as to just how to review this show.

On one hand, it’s an excellent production, with an exceptional little girl in the title role, and wonderful performances all the way around. On the other hand, even though Matilda the Musical is a popular Broadway and West End in London show, the writers of the musical turned it into a way more perturbing story than Roald Dahl’s original tale, making it, in my opinion, not only inappropriate for children, but for anyone with a social conscience!  Child abuse should never be set to music!!!

I realize that shows need villains so that there can be a happy ending when they’re vanquished, but, especially as a former elementary school teacher, I can say that this one takes that concept way too far. 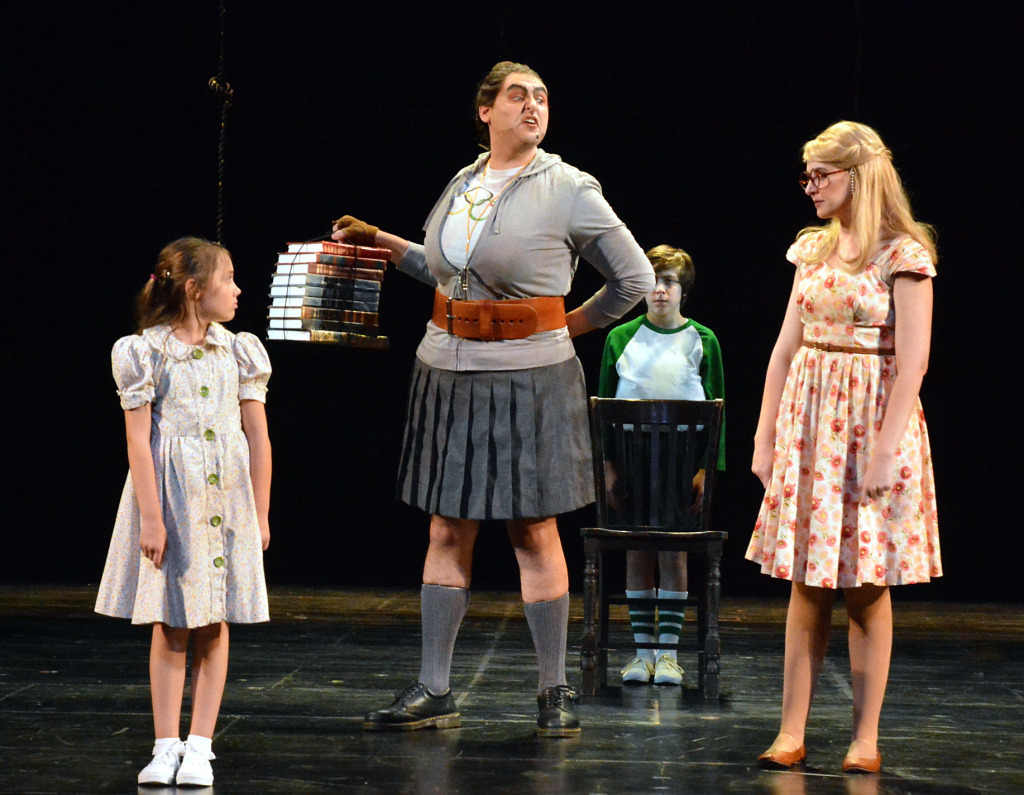 (L-R) Lucy Bollier, Nicholas Mongiardo-Cooper, Marcello Silva, and Katie DeShan. Photo by Ed Krieger, as is the one at the top of this page.

I’ll get into all the yin and yang of it in a minute, but first I have to tell you–for me to leave a juicy night early on in the NCAA basketball tournament, you know I wanted to see this one!

A few years ago, I had interviewed Matilda’s composer/lyricist, Tim Minchin, when the musical was about to open at the Ahmanson.  And even though I found him highly unlikeable, (an observation that I left out of my story and video back then, which you can read and see here: itsnotaboutme.tv/news/theatreeventupcoming-matilda-the-musical-preview-event,) I was looking forward to seeing the show I had now learned so much about.  But I chose to give up that opening night invitation to do a favor for an old pal, and then I never had time to see it during its run.

From time to time, I wondered if that was the correct decision, (even though I know that helping someone is always the right choice!)  But now 5-Star Theatricals has corrected that hole in my musical education, and I’m glad I waited.  Though the story is less-than-stellar, the production is top-notch!  This is another uber-professional offering from this theatre company.

So let’s get into the many positives of their Matilda the Musical. Actually, all aspects of this particular production are wonderful! It’s just the story I have a problem with, which is not at all to the detriment of this company. 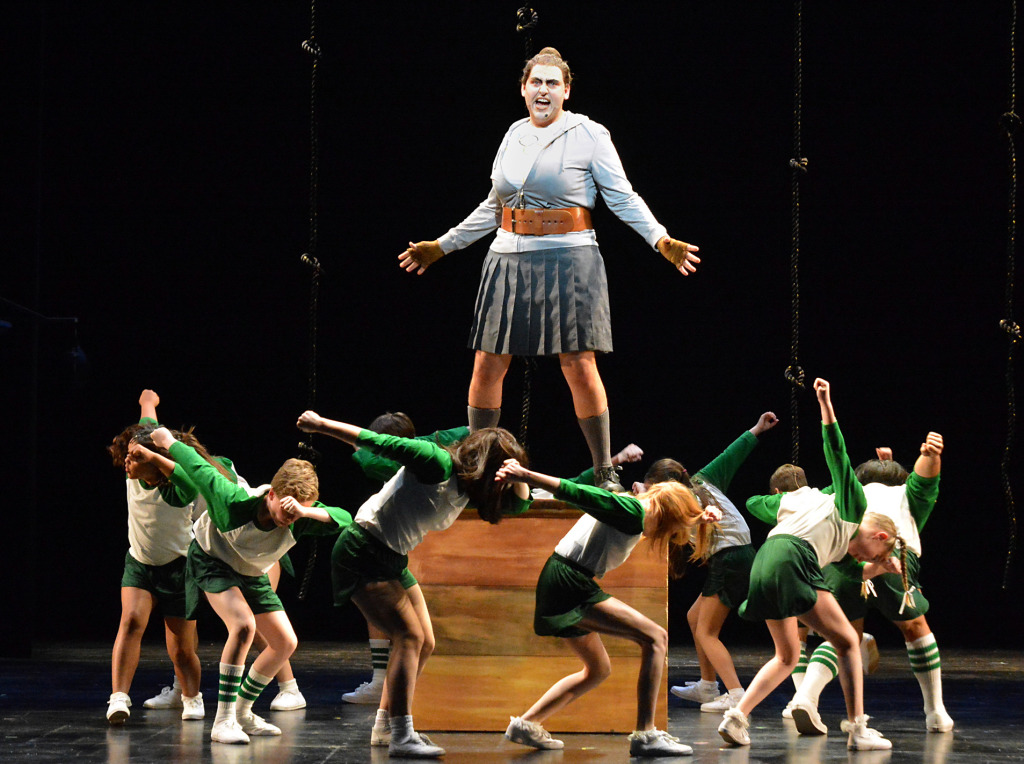 Matilda the Musical features a gigantic cast, many of them children, making this show an especially massive undertaking. So I laud them for that.

Lucy Bollier, the ten-year-old who performed the role of Matilda on opening night, is remarkable.  (I have a feeling the other actress she alternates with is good, too, but I can vouch for only Lucy.  So, if you have a choice of performances in your schedule, I heavily suggest you try to see one that features her.)

All the actors had good English accents, especially Lucy!  (But I have news for anyone who performs in British shows—people don’t sing with accents!  Just listen to the Beatles!  Or Adele.  Or Elton.  Shall I continue?)  Maybe that’s why I could understand only a bit more than half the lyrics all night, except for all the ones from Nicholas Mongiardo-Cooper as Miss Trunchbull—he totally enunciates every..single..syllable.  And totally in character! He’s fabulous, on every level!

The entire talented cast gives it their all at every moment.  There is no phoning it in, from any of them. (Actually, many of them overdo it a bit, but I have a feeling they were directed that way. And that broad comedy style is probably written into this script to begin with.)

Deanna Anthony adds much to her librarian character, Mrs. Phelps. She has just the right amount of enthusiastic wonderment. And I somehow felt a bit more safe whenever she appeared on stage. (That’s a tad weird, actually, since she was totally scary as the Dragon in the recent Shrek from this same company!) 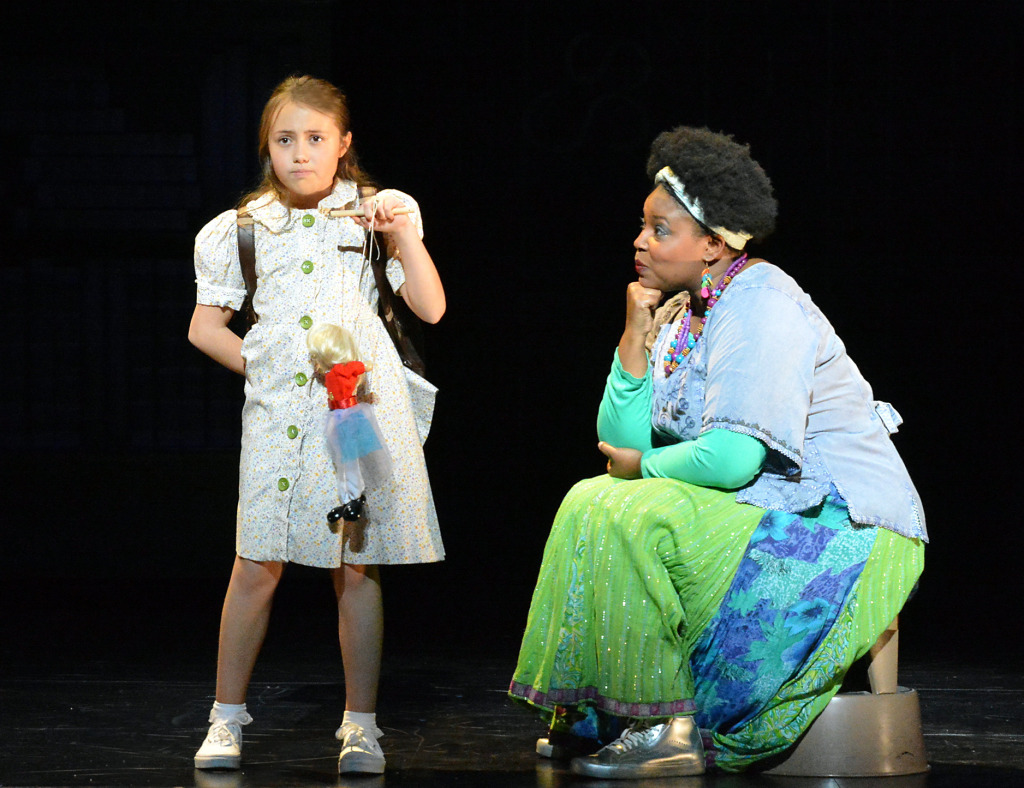 I don’t know how previous productions of Matilda the Musical did their sets, but this one, by Stephen Gifford, is a very good, easy, smart one, which supports all the action in a simple way. It’s perfect amidst the chaos of all the movement. And I also enjoyed the crazy wardrobe, especially the colorful outfits on some of the characters, designed by Noelle Raffy.

On a shallow note, as not only a female, but a hair-obsessed one, I was thrilled to see a female orchestra conductor, Jennifer Lin. And I appreciate that she has great shiny hair, since the back of her head is visible all night!  (In previous reviews of this theatre’s offerings, I’ve lamented that the conductor’s head not only sticks up from the pit, but there’s a light on it, which is very distracting.  There are the usual monitors at the back of the front portion of the audience, which show the conductor at all times. The actors look at those monitors for their musical cues, so a lit-up conductor is not for their benefit, except maybe the near-sighted ones.) 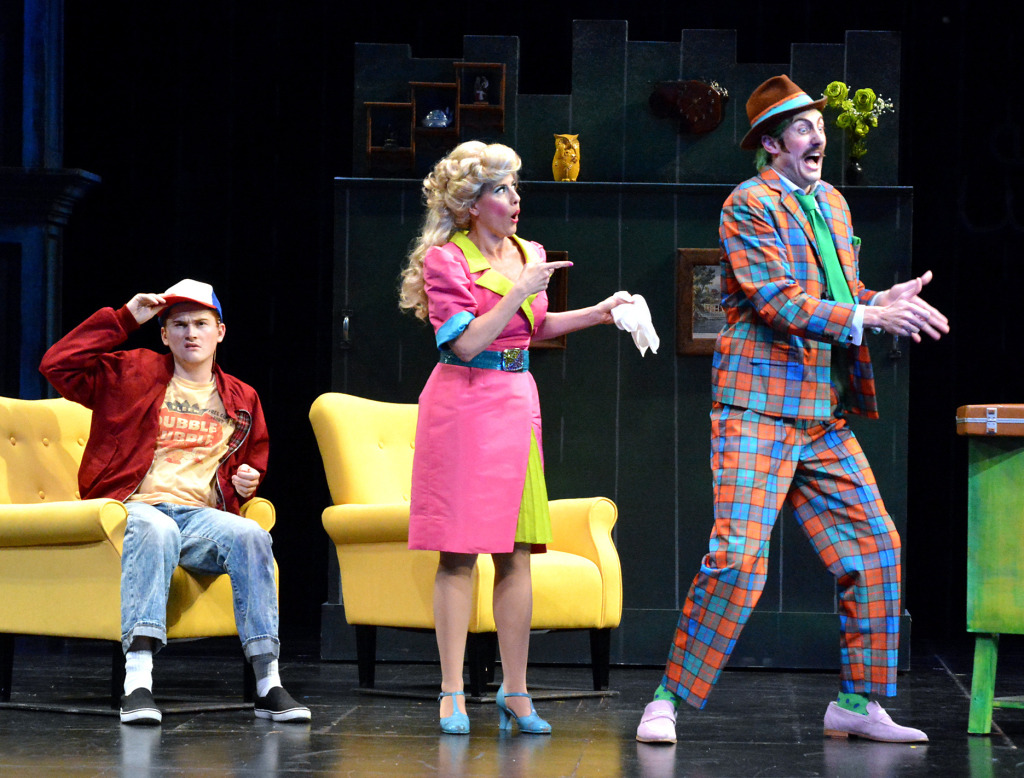 Now for my thoughts on Matilda the Musical, in general, as opposed to this production.

First of all, I had no clue what the focus of this dramedy was for most of the first act!  I hate not knowing what a show is about.  (I had researched it a few years ago after I interviewed Tim, but it’s so distasteful a tale that I must have blocked it out.)

Upon finally seeing it, I could not imagine that Roald Dahl, who also penned the charming Charlie and the Chocolate Factory, could have written such an un-delightful story as this one. So I researched all the incarnations of it when I got home from the theatre that night.  The 1996 American movie is not much like Dahl’s classic 1988 book, and in turn, this musical differs in places from them both!  It strays far from the intent of the material as originally written.

Matilda is not something that should have ever been put to music, in my opinion, but perhaps it would have been okay if they had stuck more to the original narrative, which is a lot about Matilda’s telekinesis powers, and not made it be so abusive of children.  I was very surprised to learn that it won many Olivier and Tony awards.  I really don’t see how, except for maybe Bertie Carvel, who originated the tour de force role of Miss Trunchbull. (I saw him perform it on the Tonys.) And there was supposed to be amazing choreography in the original.

On top of the confusing scenario overall, Dennis Kelly, the man who wrote the book of the musical, contrived a very confusing aspect to it. He has Matilda make-up a story for the librarian which turns-out to be…a different character’s history, of which Matilda had no knowledge! Huh???

I have to warn you that, although there are about nine children in the show, I consider Matilda the Musical to not be an entertainment that’s appropriate for kids.  (And, in case you think I’m being old-fashioned, my friend I saw the show with is in her twenties, and adores musicals, and she was just as upset by the many instances of abuse as I was! She even said it first that she was so glad that she had never seen it when she was younger.)

If you do decide to bring children to see it, we both suggest that you have a conversation with them about behavior like the ones in the show being fictional in this case, and definitely not acceptable in real life. It might be a teaching opportunity to let them know to report any abuse they see (or experience, bite my tongue,) to authorities.

I really want to reiterate—I have nothing but positive things to say about this production. The entirety of my quarrels are with the script of the musical.  It’s a horrible story, which may scar any children who see it. I have a feeling that Roald Dahl began rolling in his grave when it was first produced in London. Seeing him do that would be less alarming to me than witnessing what they did to his book! 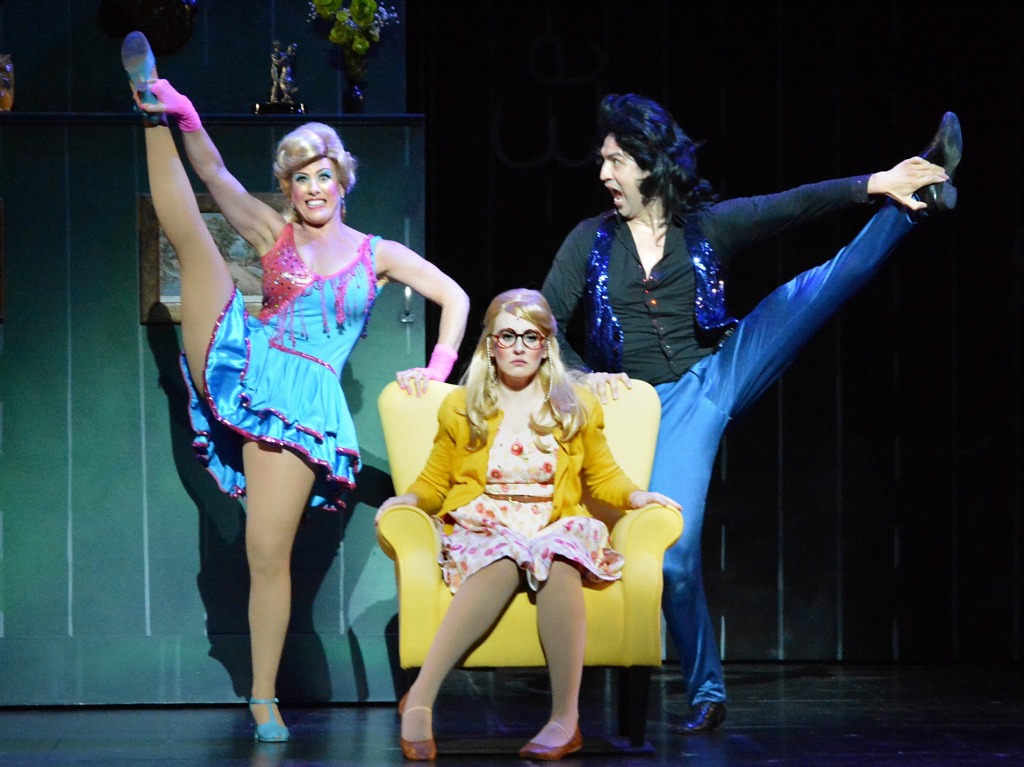 Possibly to offset the unpleasantness of the story, 5-Star Theatricals did something very lovely at the beginning of opening night.  To keep with one of the show’s themes of education, they had asked local schools to nominate their favorite teachers for an award.  They chose a quartet to honor with on-stage introductions and framed certificates at this ceremony.  So good on 5-Star for that!

And, by all means go see their presentation of Matilda The Musical. Just leave any children who are as sensitive as I am at home!