Trending
You are at:Home»THEATRE»THEATRE: MAN OF LA MANCHA
By Karen Salkin on August 24, 2018 · THEATRE

I’ve seen this classic musical only two other times in my life, and it just didn’t call out to me. So, I was a bit hesitant to give it another whirl. But I’m so glad I did because A Noise Within’s production of Man of La Mancha is definitely worth seeing. 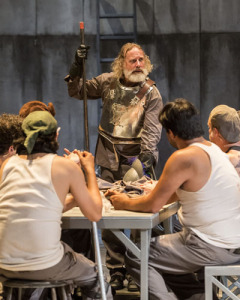 Geoff Elliott in the center. Photo by Craig Schwartz, as is the big one at the top of the page.

I first saw the show when I was little girl, and I was totally confused by it. I didn’t have a clue what was going on. [Note: It’s not a show for kids.] Then I saw it again many years ago at the Pantages Theater in Hollywood, and I was just as confused as I was when I was younger. And that would’ve been the case this time, as well, but for the uber-helpful program notes. The storyline takes the already-crazy tale of Don Quixote and makes it even nuttier by involving the Spanish Inquisition. So I really have to thank this company for the “Summary” and “Character Map” because there’s so much going on in this show!

My very first note on opening night was that I would’ve rather seen it the original way that it was presented on Broadway and in most subsequent productions, rather than this little bit more modern take on it, but in the end I don’t think it mattered very much. I’m no Man of La Mancha expert, but I believe the difference came down to just the modern prison costumes and contemporary props, such as a lot of plastic bags. But if this is the first time that you’re seeing the show, just don’t judge those components, thinking that that’s how it looked originally. Just pay attention to the stunning live music, score, and performances. And story.

Speaking of the story, this is not the true story of Miguel de Cervantes, the author of Don Quixote. That part is all imaginary on the part of the playwright. (I really hate anyone misrepresenting real-life events and people, but what are you going to do. That’s what confuses me about this show, though.) 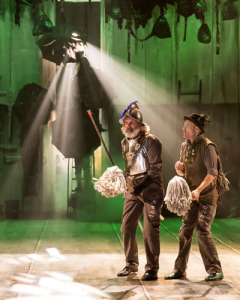 The beautiful songs are due to the original composers, but the other good aspects of what I saw at A Noise Within are all to the credit of this company. I was especially happy to see Kasey Mahaffy perform again. He was the stand-out actor in their recent production of Noises Off, and since this is mainly a repertory company, I was really hoping that he would be in this one, too. But I didn’t see how they could fit a ginger into this beyond old school scenario. But fit him in they did…as Sancho Panza! Now, that’s what I call creative casting! I usually am not a fan of that kind of casting, actually, but in this one case, I applaud it. Kasey brought what I’m learning is his usual humor to the otherwise-mainly-dreary show.

Then there’s the stunning iconic music—I’ve been hearing Dulcinea in my head since the second I got home…almost a week ago!!! But it’s made even better by this fabulous orchestra. Their location in the theatre is also creative–they’re in the back of the auditorium, high above the assemblage, and off to the side. But the music somehow sounds like it’s coming from exactly where it’s supposed to be. And I love, love, love those Spanish guitars!!! 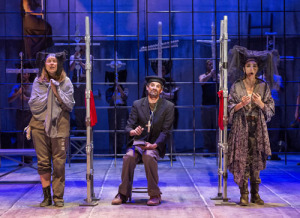 Jeremy Rabb in the center. Photo by Craig Schwartz.

I did make the mistake of listening to The Impossible Dream, sung by the incredible Richard Kiley, (the star of the original Broadway show,) earlier that day, so, of course, anyone was going to pale in comparison. But Geoff Elliott, who plays Cervantes and Don Quixote here, really sells this song as the character, which I really appreciated, as I’m sure all audiences will.

My favorite voice was a surprise to me. It belongs to Jeremy Rabb, who portrays the priest. He doesn’t have many songs, but the little bit of singing that he does do is beautiful.

I was just a tad confused as to why only a couple of lines of the charming ditty, A Little Gossip, were sung. Was there an opening night glitch? Or perhaps I just blacked-out for two minutes or so. I kept waiting for them to continue it! Or maybe they cut it waaay down to keep the show just under two hours, which it is, with no intermission. (But no worries about sitting still that long in a row–it does move right along.) 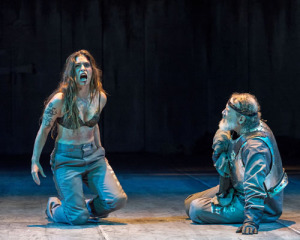 A Noise Within really makes full use of their thrust* stage for this show. And the prop and “scenery” moves are so subtle that I didn’t even notice the background changing when it did, which was often. So major kudos to them for that bit of innovation. [Note: In case you’re not familiar with the term, a “thrust stage” is one that extends into the audience on three sides, as opposed to the usual stay-away-from-the-audience one that’s in most Broadway-type theatres.]

All in all, Man of La Mancha is a theatre experience I can’t imagine anyone not enjoying. So hurry out to Pasadena to see it while you have this marvelous opportunity.