Trending
You are at:Home»THEATRE»THEATRE: LOVE ACTUALLY LIVE
By Karen Salkin on December 7, 2021 · THEATRE

Yes, you’ve seen that title in this e-zine before. But this is a new review because I’m thrilled to report that the beloved hybrid musical-movie, Love Actually Live, has returned to the Wallis in Beverly Hills for yet another holiday season!

Mr. X and I, who have now seen the show three and four times respectively throughout the years, loved it just as much as ever. This is one presentation that never gets old. I actually cannot even picture the holidays without it now! 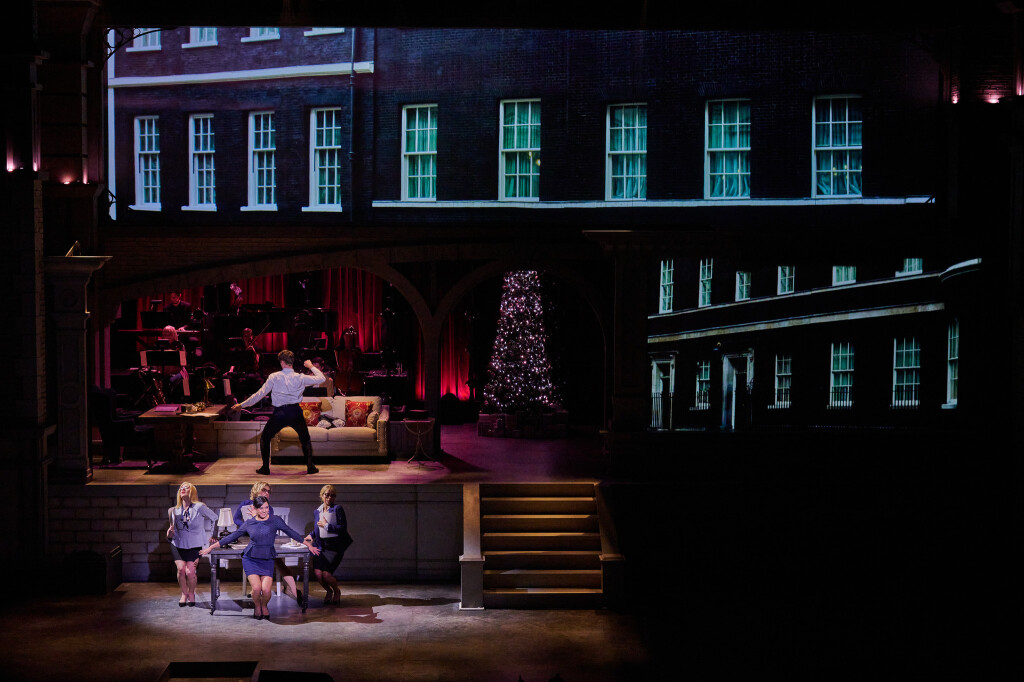 Love Actually Live Cast. Photo by Rob Latour, as is the one at the top of the page.

Mr. X is such a fan of Love Actually Live that he actually put aside his pandemic fears to go to our favorite theatre to see it! He’s turned down every other recent invitation, even though we’re both triple-vaxxed, but went to this one not only willingly, but enthusiastically!!! I’m proud to say that he even went so far as to keep the opening night audience entertained before the show, at intermission, and during the after-party with his ingenious fireplace Christmas sweater! How’s that for getting into the spirit of Love Actually Live? 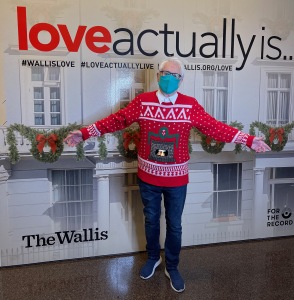 Mr. X, still being a mystery under the mask, rocking his fabulous Christmas sweater in front of the lobby photo op. Photo by Karen Salkin.

Returning to the Wallis after the lockdown was like reuniting with a cherished old friend.  We felt instantly comfortable. It’s actually the only theatre Mr. X will go to anymore. We were pleased to see that they check vaccination cards and IDs on the way in, tickets and programs are done by text, and everyone has to wear masks for the duration, except when outside. To that end, the bar is now on their lovely patio, so people can take their masks off before the show and at intermission, and the Opening Night party was also held outside this time.

Now, let’s get to the actual show already, shall we?

In case you don’t know about Love Actually Live, (which you should because I’ve reviewed it in two previous years,) this is the quick run-down for you: Scenes from the iconic 2003 British Christmas movie, Love Actually, are shown, in order, on several giant screens on and around the stage, and live actors play those characters in song only. All the dialogue is directly in the film, but the on-stage actors sing appropriate songs from the soundtrack, as characters from the movie, when their scenes come up. [Note: If you need further explanation, here are the links to my two earlier reviews: itsnotaboutme.tv/news/theatremusic-love-actually-live and itsnotaboutme.tv/news/theatre-love-actually-live.]

The brainchild of For The Record, (who produces the show with The Wallis,) the entire presentation is downright ingenious! I appreciate every single clever on-stage touch, no matter how small. Every audience I’ve seen it with seems to, as well. It’s all just brilliant. The movie itself is just about perfect, (although I can always do without the two sad stories,) and Love Actually Live really accents so much of the narrative in perfect ways. 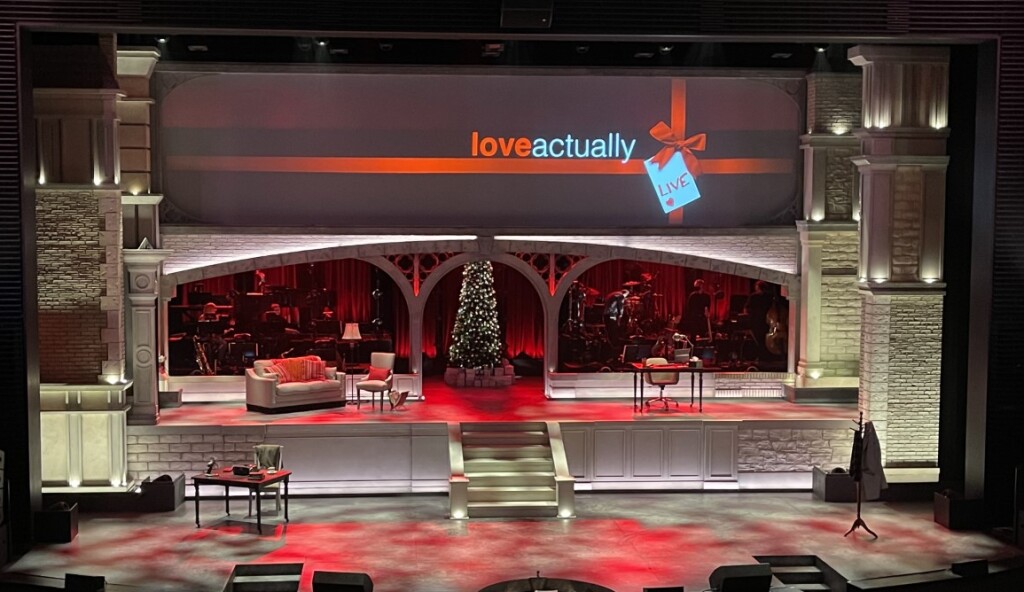 The beautiful set before all the magic happens. Photo by Karen Salkin.

Since this production is a musical, (although far from the norm,) it’s wonderful that every member of the cast is a superlative singer. The one teensy-weensy little problem for me is that several of the females look alike, so, even though I was sitting very close-up, I wasn’t always sure who was playing each character. I had to boil it down to if one of them had a tiny wave in her ponytail or not.

Most of the cast is new from year-to-year, except that, happily, Rex Smith is back playing the crazy Bill Nighy character from the film, the hilarious old rock star. At this point, it just wouldn’t be the same for me with anyone else in that role. On the other hand, there is one returning man who has a great voice but really annoys me—it’s like he’s doing Les Miz instead of this fun show. 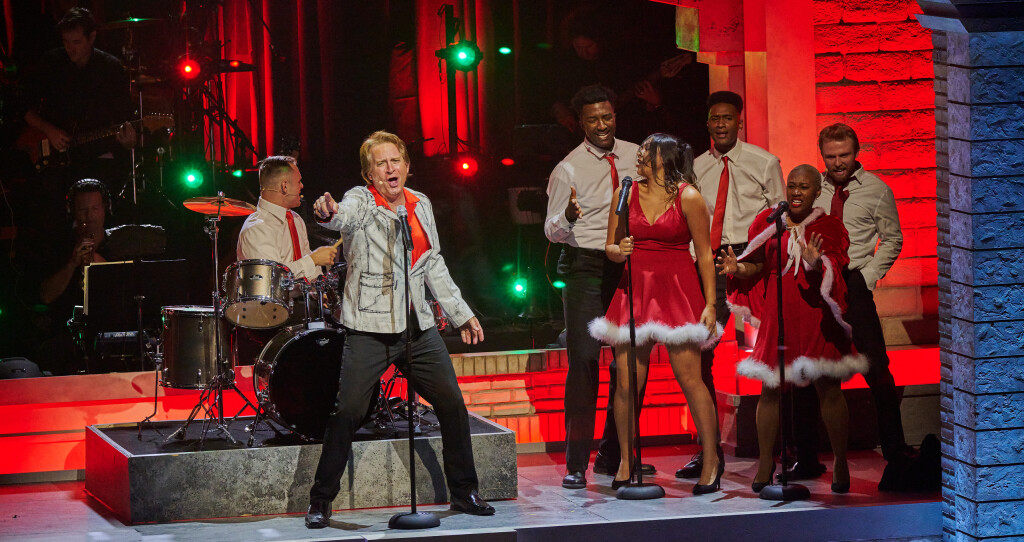 Even though I’ve greatly enjoyed all the previous players, I was also happy to see a trio of new males with whom I’m familiar. 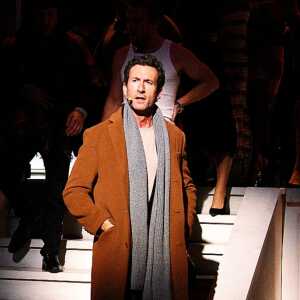 Aaron Lazar, who Mr. X said was the most perfectly-matched to the character in the film, was on last year’s Filthy Rich, a semi-musical TV series; I’m probably the only person in the world who watched it. But I love his singing so much that, as evil as the character was, I felt bad when he got killed off. (As did the show just a few episodes later, with an ending that still haunts me.) So I loved seeing him in the Colin Firth role here. He has the perfect Broadway voice. (And appearance, too, actually.)

I also loved Brian McKnight, Jr. I was lucky enough to sit next to his dad in the Rams’ VIP section before the pandemic, and I swear that I had no idea he was old enough to have such a grown-up son. So Brian Jr. was quite the surprise to me. His character’s song, a jazzy and hip version of White Christmas, is always the highlight of this show for me, so I was wondering if Brian would perform it as magically as his predecessors in the two previous productions. But no worries at all–he totally lives-up to the challenge. I love his singing! And his silky delivery is icing on the cake. I’m sure his famous dad is very proud. (Or at least he should be!) 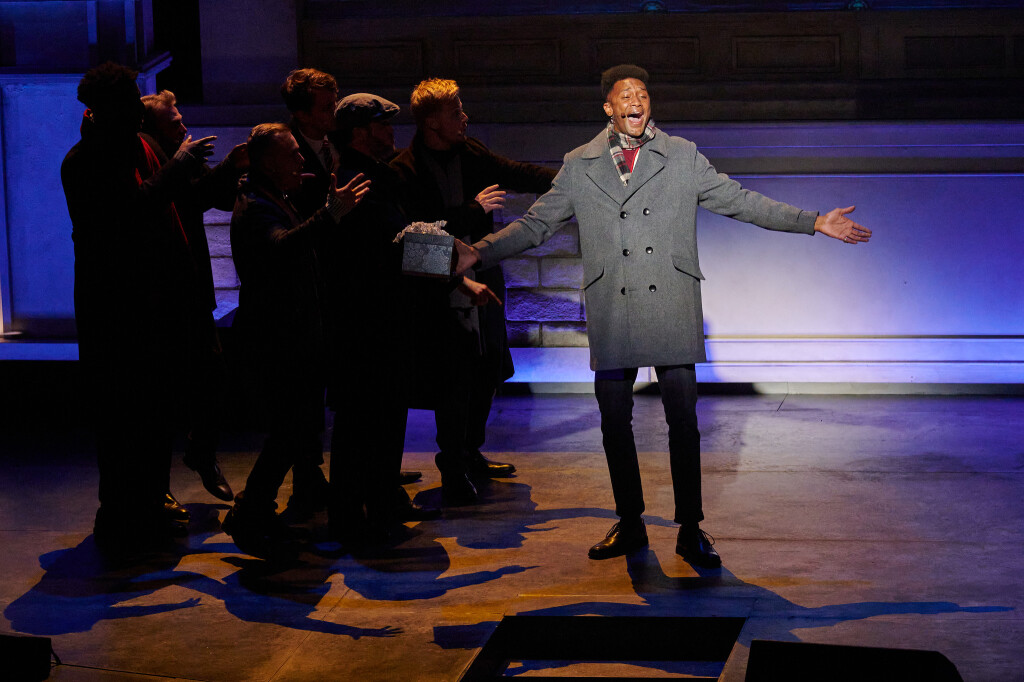 Lastly, I absolutely adored seeing a now-grown-up Anthony Federov, in the Liam Neeson role, (even though those two look nothing alike.) If his name sounds familiar, he came in fourth way back in Season Four of American Idol. I always voted for him. That was sixteen years ago, and he looks basically the same! And sings even better.

Adding to the fun of seeing Love Actually Live is a perfect photo op on the way down to the actual theatre. There’s a giant poster of the show for everyone to pose in front of. You can even use the famous pre-made signs that a lovesick male character in the movie does, or make your own with the materials provided. The best part of it to me is…the great lighting they were kind enough to set-up for the pix! And, occasionally, there’s a Wallis staff member there to take the snaps for you. Otherwise, you just clip your phone onto the light. (But then do not forget to set the photo timer!) 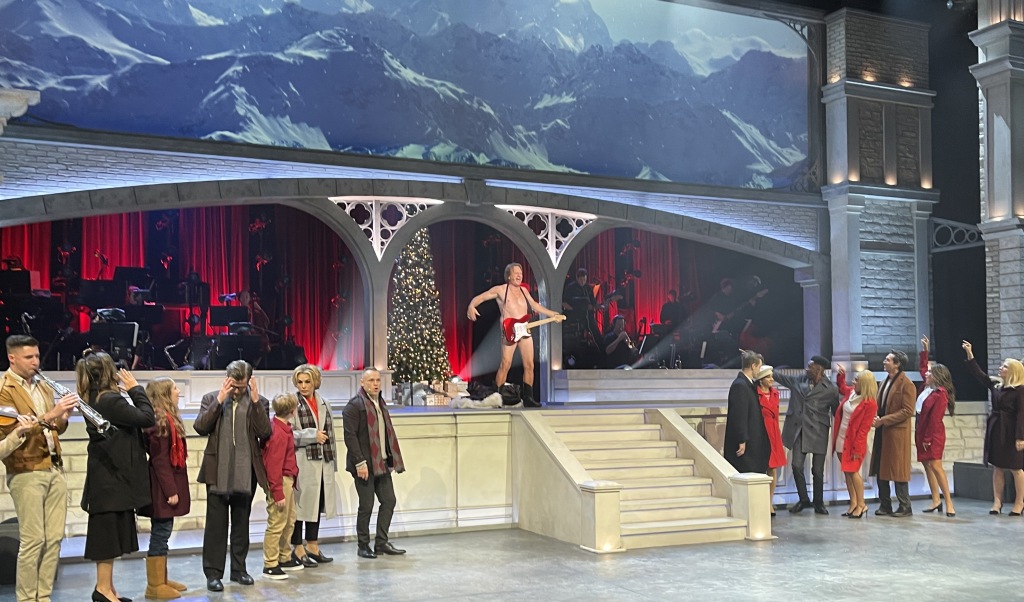 Opening night was made even more special by Richard Curtis, the writer/director of the original film, being in the audience. He was actually seeing the show for the very first time. (I wonder if his departure and subsequent arrival back at Heathrow will be anything like those portrayed in the movie. I almost want to journey to England myself, just to give him the jubilant “welcome back” that he deserves!)

Now, please bear with me for a moment while I tell you about a very serious and important portion of that evening. The opening night of Love Actually Live began with the solemn announcement that Jacqueline Avant, one of the Wallis’ most dedicated board members, who was beloved by so many Angelenos, was killed in her home that morning. I had read that tragic news earlier, but didn’t know of her connection to this theatre until Executive Director and CEO, Rachel Fine, along with outgoing Artistic Director, Paul Crewes, made that heartbreaking statement before the show started.  Rachel ended by saying, “The entire Wallis family is mourning the loss of Jacquie. We have lost a true angel. May she Rest In Peace.”

The perfectly appropriate tribute finished with an angelic a cappella version of Will The Circle Be Unbroken by Ty Taylor. As a former cast member of Love Actually Live, Ty was the perfect bridge between Rachel’s shocking but loving words and the happiness of the show.

Now, to bring the room back up here, let me say that as I stated at the beginning of this review, this was my fourth time seeing Love Actually Live at the Wallis. And all from different vantage points. So now I can honestly affirm that all seats at the Wallis are excellent ones, with wonderful sightlines. And they’re the most comfortable theatre seats in all of Los Angeles, especially for those of us who may have gained the “Covid 19,” if you get my drift—those seats more than accommodate even my now-a-bit-more-plump-than-usual bum!

Let me finish by pointing-out that Love Actually Live is at the Wallis until only the last night of the year. No worries if you wait until the end of the run to see it, though–it will be the perfect way to spend New Year’s Eve!