Trending
You are at:Home»THEATRE»THEATRE: LITTLE BLACK DRESS THE MUSICAL
By Karen Salkin on December 6, 2019 · THEATRE

Over the summer, I had a male bestie who saw me in just colorful attire because..that is what a hipster wears in the summer! And I’m a slave to fashion. So when he finally beheld me in a little black dress in the Fall, he emailed me the next day, saying, “I loved you in the solid little black dress last night. You looked chic, sophisticated, sexy, and rich! And black makes everyone look thinner.” Ouch to that last part, but a positive endorsement for LBDs everywhere!

So the female brains behind this musical, Little Black Dress, (running right now at Culver City’s Douglas Theatre,) made a smart choice to center what is really a story of love and friendship around this well-regarded wardrobe must-have. 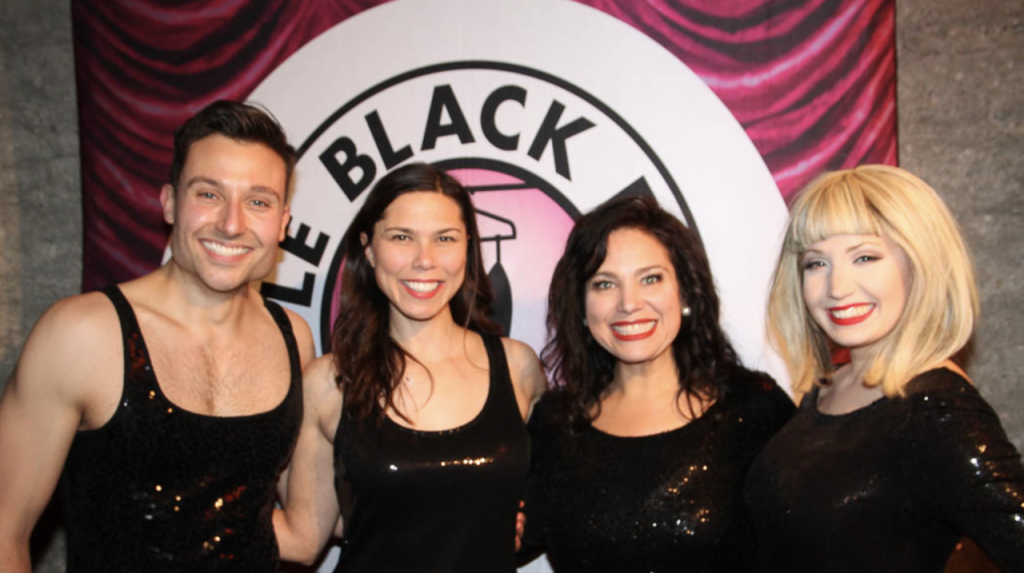 At first I thought the show was going to be a revue because, after all, how much can you say about a little black dress, even the dozens of mine that I tried on for opening night? But after a few ditties, I realized that Little Black Dress (which I’ll be referring to as “LBD” for the rest of this review, and my life!,) is just the clever hook to get us into the comedic narrative. 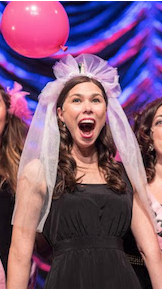 I must laud the entire cast of four who give it their all at every moment. Danielle Trzcinski, Jennette Cronk, Jenna Cormey, and the lone male, Clint Hromsco, who does a lot of the heavy lifting. (Jennette and Jenna play several characters, too.) And they all have excellent voices, which is always a bonus in a musical, right?

But the absolute most credit goes to Danielle. She not only created the show but also co-wrote the script and lyrics!!! That’s a whole bunch of talent for one person.

The show has some really fun moments, especially the number I Knew It, about the main character’s first date with her future husband. There are lots of clever touches all the way through, not just the songs. There’s an interesting improv bit and a couple of instances of audience participation, too. Speaking of the audience, there was a group of uber-enthusiastic women behind me on opening night; they really got into the spirit by commenting on everything! (And I do mean everything! It was really annoying, but I totally appreciated their enthusiasm.) 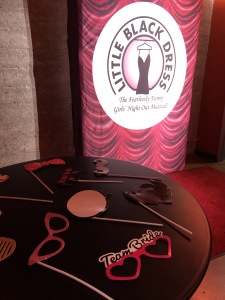 I highly suggest that you get into the mood, as well, by wearing your own LBD when you go, (as I did, of course,) whether you see Little Black Dress here in Los Angeles or on tour throughout the country. It makes you feel more a part of it. It was raining on the day of opening night, so a lot of people opted for bad weather attire instead, which disappointed me. But I did notice a group of Red Hat Society ladies there, looking great. This is a really fun show to see as a girls night out.

I’m sure that absolutely every audience member can relate to something in this show. It gave me lots of feels from my own life, some good, one bad, but all interesting. And it made me hark back to when I owned no little black dresses, which is something I’ve never ever even given one thought to because now it seems that half my wardrobe is LBDs! So I thank this show for inspiring my own apparel memories.

A couple of the male characters gave me panicky flashbacks to my surprise 30th birthday party, at which my manager thought it would be a good idea to get me not one, not two, but three strippers! (It’s a horrible but very amusing tale about which I’ll tell you in one of my upcoming YouTube videos—perhaps on my January 14th bday.) 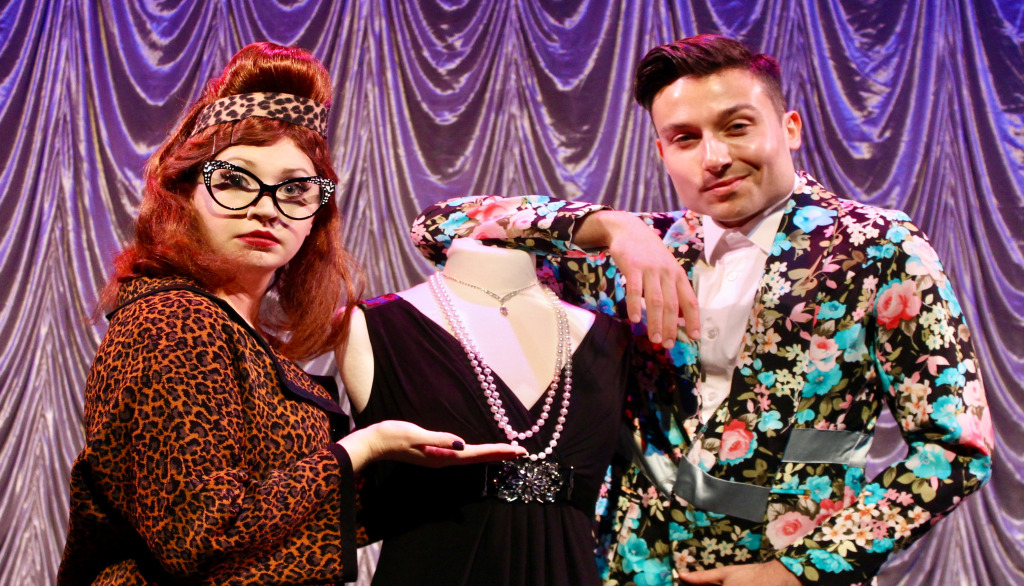 Jenna Cormey and Clint Hromsco. Photo by Rebecca McNicholas, as is the one at the top fo this page.

There’s only one bone that I have to pick with this entire presentation, and it’s that there are a couple of very lewd songs. Not only are they inappropriate, but they’re entirely unnecessary. They knocked the smile right off my face each time. I heard several negative comments in the audience about those instances, mainly “vulgar” and “crass,” assessments with which I agree. Too many references to genitals were already enough, but those few songs made me unable to recommend the show to many people I know, who would be offended by the beyond-blue lyrics. (And if you ever watched my former TV show, you know that I’m not shy. But I was never coarse and classless. At least, not in this way.) If those disturbing numbers ever get removed from the scenario, then mothers could happily bring their daughters to it, (and vice versa,) which would be lovely. The rest of the show stands on its own; it doesn’t need the crutch of crudeness to lean on. 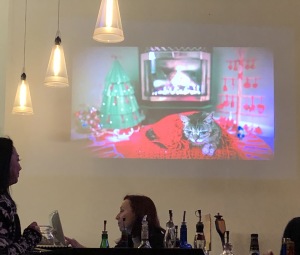 The projection-adorned bar at the Douglas this holiday season. Photo by Karen Salkin.

And it’s just a scootch too long. But when Little Black Dress The Musical gets tightened-up and refined a bit, and loses the too-lewd portions, I can see it really going places. (Like Off-Broadway, perhaps?) I’m really rooting for that to happen.

So for now I say—Los Angeles Denizens, get your own LBDs ready, and prepare to party with this musical crew. It’s a fun holiday thing to do.