Trending
You are at:Home»THEATRE»THEATRE: LINDA VISTA
By Karen Salkin on January 21, 2019 · THEATRE

The Steppenwolf Theatre comedy, Linda Vista, which just opened at the Mark Taper Forum, hits on many universal issues, such as ageism, divorce, love, and politics. But, in my eyes, there are two over-riding aspects of this play: the wonderful laugh-out-loud humor throughout, and the live sex acts, which almost ruined the fun of the production for me. (If you’re going, “Wait, whaaat?!,” reading that last line, just imagine how jolted my friend and I were seeing that action in person!!!) Details on both as we go along.

Despite that one situation, I say absolutely go see this show! Just make sure you’re accompanied by the right person, or it can get really uncomfortable. 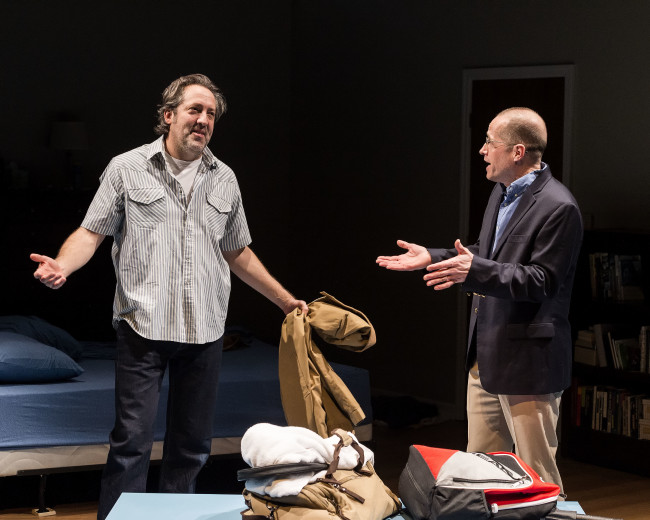 Ian Barford and Tim Hopper. Photo by Craig Schwartz, as is the one at the top of this page.

Since that’s one of the only tiny negatives of Linda Vista, let’s cover the very many positives first.

The play’s topic, (the midlife crisis and dating life of a middle-aged divorced man,) is pretty much a pat one, but the brilliant writing of Tracy Letts makes it not so, in this instance. On opening night, the theatre was filled with some of the heartiest laughter I’ve ever heard.

The show is funny from the get-go. There’s a plethora of really excellent lines, like my fave, about an older man not wanting to date young girls, “I don’t want some girl who doesn’t remember New Coke.” (I hope it reads as funny as it’s delivered in the play. And that I wrote it down correctly in the first place!)

I especially appreciated all of the topical humor. The very timely anti-Trump discussion at the top is just perfect. It got me guffawing right away. 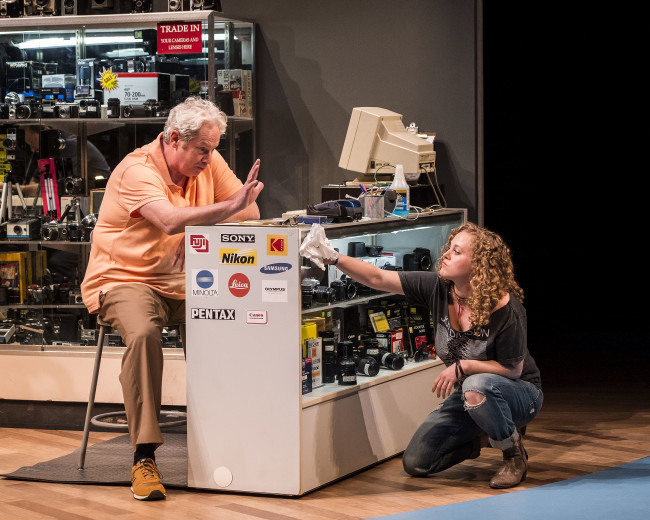 As you know, unlike most other theatre critics, I don’t feel the need to ruin all the action for you by recapping the entire story. And I’m not even going to analyze an older man going through a divorce; that’s really not the point of this entertainment for me. I just like to laugh, and leave any theatre with a smile on my face. Or at least be wowed by the talent involved. And Linda Vista checked all those boxes for me. Big-time.

The casting is perfect, with excellent performances all the way around. I was impressed with every single actor’s delivery and timing. And the direction by Dexter Bullard makes the absolute most of the compelling humor. So I didn’t even care what the story is about. 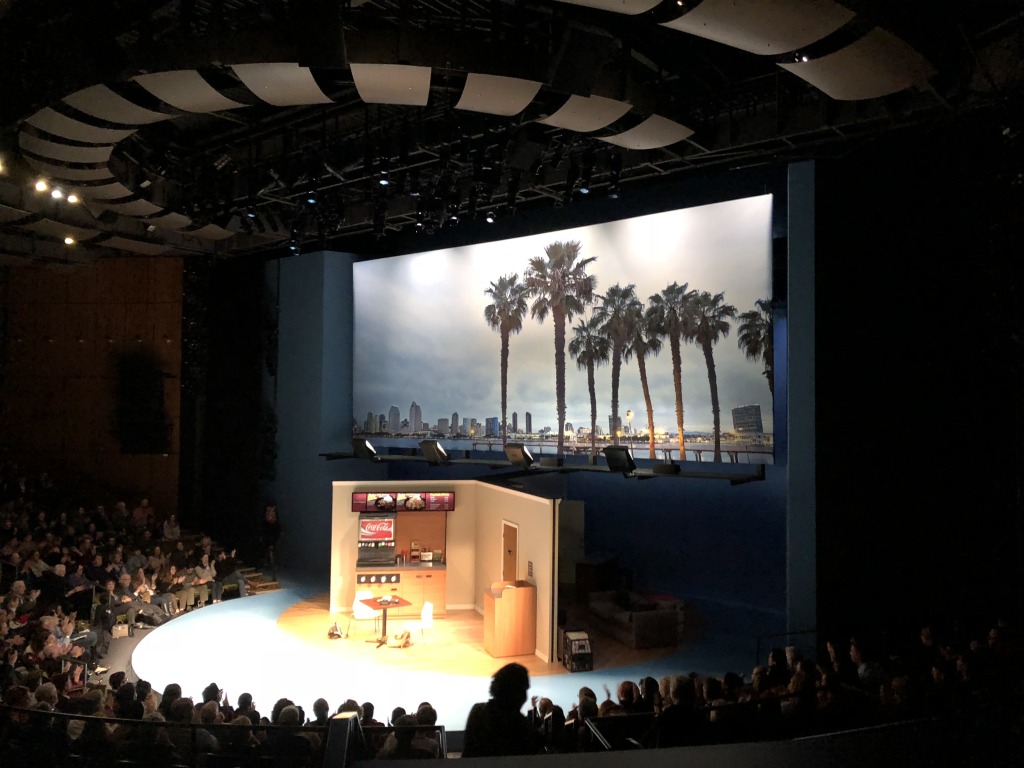 The set from on high. Photo by Karen Salkin.

There is one aspect of Linda Vista that I am going to analyze for you, though. I usually don’t look for deeper meaning in a stage set, (perhaps because in college, I dated my set design professor rather than actually studying the course material to get my “A,”) but by the middle of the first act, I noticed something interesting, (intentional on the part of the Scenic Designer Todd Rosenthal or not,) and was impressed by it. Over the basic set, there’s a gorgeous huge photograph of San Diego, where the play takes place. And it hit me that said hugeness might be to help us realize just how small our basic dating-sex-relationship-work-career problems are in the scheme of the world. It really reminded me of the end of Casablanca, when Rick tells Ilsa, “…it doesn’t take much to see that the problems of three little people don’t amount to a hill of beans in this crazy world.” I don’t know if that’s what they were going for or not, but if so, great job! (At least I paid attention in Cinema class.) 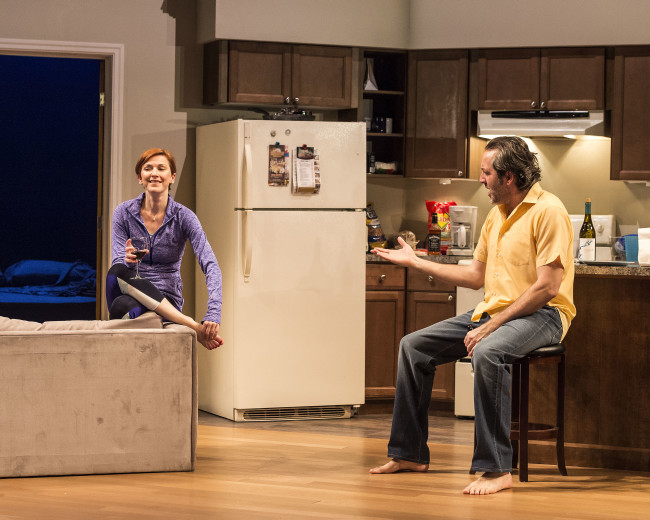 One other thing I took note of is this: For some reason, I always think that women with short hair must be secure, (maybe because they don’t need to hide behind long tresses.) So that’s a good look for a life coach, which the short-haired character in Linda Vista is. So, if that was by design, props to the powers-that-be that decided that little detail. And since I’m not a fan of life coaches, in general, I loved seeing one who’s somewhat of a mess. 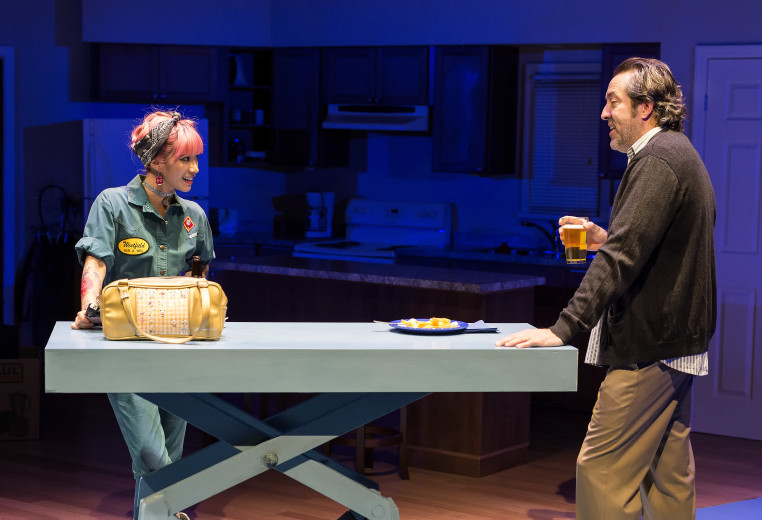 Okay, now I have to discuss these sex scenes, so this is a Spoiler Alert, in case you want to be surprised by the deets. (Then just skip the next four paragraphs.) But if you do want to know exactly what I’m warning you about, read on.

Right up front, let me say that the dialog in those scenes is amusing. Very amusing. But the actors are totally nude—including full frontal. And they are simulating sex pretty realistically. The lighting does get much lower, but even from almost the very top of the Taper, I could make it all out. (In case you noticed me using binoculars for those scenes, that usage was because I could not believe what I was seeing, not to get a better look. Trust me on that.) For perhaps the first time ever, I was thrilled to be sitting so far back! In fact, for those scenes, I would have preferred to be in the lobby!

Even if there is no actual penetration, (and even with the binos I cannot vouch for that there is not,) intercourse is well simulated, which I’m sure many of us do not want to see on a stage. I’m far from a prude, but this little surprise is just weird. And trying to figure-out just why they would do this in an otherwise-classy presentation took up way too much of my brain power; I found myself laughing less after those scenes.

The main reason I’m warning you about all this is so that you don’t see Linda Vista with the wrong person.  Can you imagine just how uncomfortable it would be on a first date? Especially a blind one. Or with your parents? Ugh—I actually don’t want to imagine that last one.

I noticed that the program credits an “Intimacy Consultant,” which sort-of amused me. They should have consulted me instead, and I would have told them, “Don’t do it!” They need to leave sex where it belongs…on the computer! 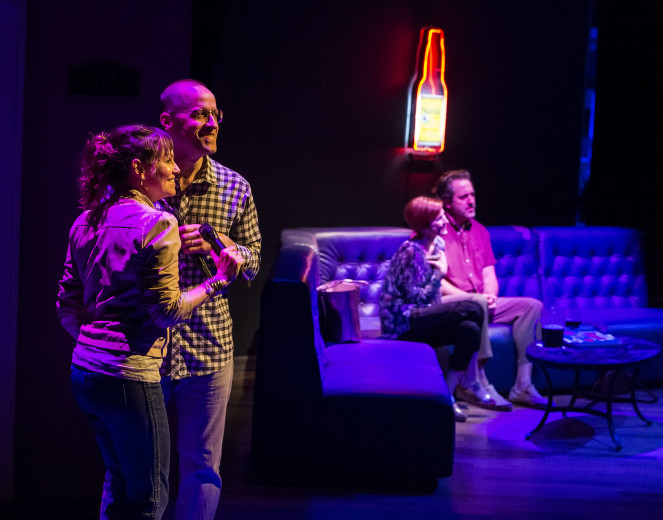 Besides the sex, my only other small quibbles with Linda Vista are these: The music during the club scene is way too loud! (And remember—I was a hip-hop club promoter just a little while ago. So if I say music is too loud, it is!) And the show is waaay too long.  With no real conclusion, except maybe that life goes on.  Duh.  So just enjoy the journey.

And a fabulous journey it is! Just don’t opt to sit too close. Unless you’re a voyeur. Then, by all means, go for it.