Trending
You are at:Home»THEATRE»THEATRE: LACKAWANNA BLUES
By Karen Salkin on March 18, 2019 · THEATRE

Anyone with a heart must see this show at the Mark Taper Forum! Ruben Santiago-Hudson is talented, charming, and has soul with a capital S! When I would see him do his expository few lines (as the police captain) on Castle each week back in the day, I had no idea that his capabilities were so wide-ranging! 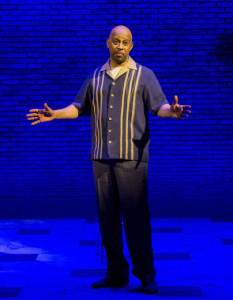 Ruben Santiago-Hudson. Photo by Craig Schwartz, as is the one at the top of this page.

I have to admit that I usually shun solo productions. I just can’t listen to one person talk that long in a row. Heck, I was even constantly surprised that so many people were happy to watch my TV monologue for so many years! But at least it was only a half hour, as opposed to theatre presentations, which are usually at least eighty minutes, as this one is. (And people loved to see me suffer when I was not amusing.)

So, it was with a bit of trepidation that I embarked on this one-man tale last week. But I had a feeling it would be good. And that hunch paid off.

Ruben Santiago-Hudson actually brought his tour de force performance to New York audiences almost two decades ago, and from there it was turned into a TV movie. And now, here he is again, sharing this story with us Angelenos. 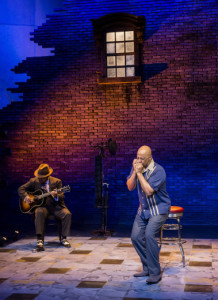 Lackawanna Blues is Ruben’s homage to his precious “Nanny,” who brought him up in the rooming house she owned in a small town in upstate New York in the late ‘50 and ‘60s. He portrays over a dozen denizens of the place, and moves seamlessly from one character to another. And I so appreciate that he doesn’t over-dramatize each one; he lets us know exactly who’s who simply with subtle changes in voice or physicality. Very impressive.

Even more impressive is that he not only is performing this piece, but wrote and directed it, as well! (So, sort-of like my former show; except that I didn’t write or direct—I just spitballed for thirty minutes. So, actually, not at all similar.) And Ruben sings beautifully, too! And plays the harmonica. And even does a little bit of dancing. Is there anything this man can’t do?

In addition to the perfect performance, Ruben’s writing is a joy. One of the characters has some of the most hilarious malaprops I’ve ever heard. And so many of the lines are brilliant, such as, “Nanny was like the government, if it really worked!” (I hope I quoted him correctly—I’m not the fastest jotter-downer of notes, especially in the dark.) 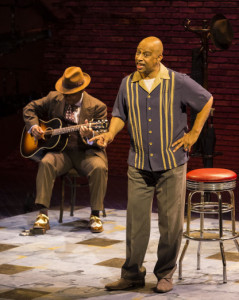 It’s all delightful, including his occasional ad libs in reaction to something in the audience. And the play is oh so touching. I saw more than one hanky come out in the audience near the end.

I do have to admit that I was occasionally lost, especially at the top, when he started right in with the story, with no preamble. If I had not known what the scenario is going in, I might not have caught-up. (But now you guys are apprised, too, so you won’t have an issue, either.)

But I was never bored. I spaced-out only once, harking back in my mind to my own nanny, my beloved Edna.  (But Edna was my real official nanny because both of my parents were teachers; Ruben’s precious Rachel was his “nanny” because she ever-so-kindly chose to take him in. But they were each our best buds for life, which made this show even more special to me.) I’m sure that many of us have our own nanny stories, but I can’t imagine anyone who can spin the tales of them as eloquently as Ruben does.  Nor the energy to do so several times a week! 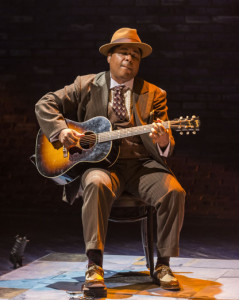 And let me give some love to Grammy-winning blues guitarist Chris Thomas King, who’s on-stage with Ruben for the duration. He just took over the music duties very recently, due to the February death of Lackawanna Blues’ original music man, Bill Sims Jr., who had also composed it all. (And to whom Ruben gave a little nod as he walked off, by tipping a hat that I believe to be one that Bill would wear. Lovely gesture.) That could not have been an easy task, but watching the duo, I would have thought that Ruben and Chris had been working together for years—it’s all so tight and spot-on. And fabulous! [Note: Chris composed some additional music for it.]

And the music adds so much to this show. It put us in a good mood right from the start, first with a recorded song, (which I believe is Grazing in the Grass by Hugh MasEkela, or something like it—I wasn’t going to be rude and break-out my phone to Shazam it, even though it was before the opening lines,) and then we were treated to Chris’ blues guitar licks (or riffs—I really don’t know the difference) right away. And Ruben broke-out his harmonica every now and again, which brought an extra spark to the proceedings.

On a personal note, I was due to be on the East Coast right now, but I changed those plans so I could go to Palm Springs to watch The Stranger I Love Most, Roger Federer, play tennis. But, very sadly, I had to put a pin in those plans, as well. So here I was, still in LA, which made me lucky enough to be in the opening night audience of this esteemed show.

No matter your plans for the next month, I highly suggest you include seeing Lackawanna Blues in your itinerary. You can thank me later.