Trending
You are at:Home»THEATRE»THEATRE: KING JAMES
By Karen Salkin on June 13, 2022 · THEATRE

I’m sure that many of you know by now, especially after my most recent YouTube video, how majorly into basketball I am. Always have been. So when I heard that the Mark Taper Forum was presenting a new play called King James, (which, lest you think it’s about the King James Bible or the seventeenth century King, is peripherally about LeBron James’ time playing for the Cleveland Cavaliers,) I was there. 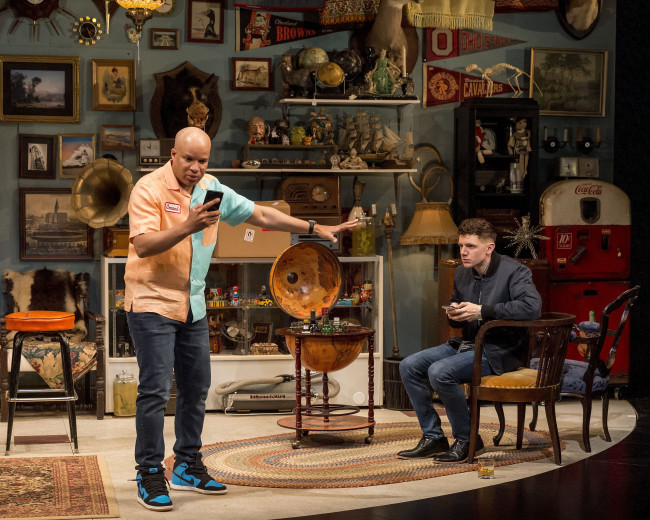 Glenn Davis and Chris Perfetti. Photo by Craig Schwartz, as is the one at the top of this review.

My only problem was…its opening night was at the same time as Game 3 of…the NBA Finals!!! What’s a basketball-loving girl to do? So I decided to record the game and go to the opening. But I did have time to watch the pre-game show before I left, and guess what they were discussing? That LeBron James is now the first active player billionaire! And then I see a play about fans loving (and hating) him! Kismet.

It’s actually not really about basketball nor about LeBron James (“King James”) himself. It’s about the journey a duo of Cleveland pals–played for max laughs by Glenn Davis and Chris Perfetti, who’s equally funny on Abbott Elementary, one of the very few sitcoms I watch—take over the fourteen years from LeBron’s rookie season with their beloved Cleveland Cavaliers through the Cavs’ 2016 NBA Championship.

When I was trying to figure-out just what the genre of this play is, I had to coin a new one for it—I dub it a “buddy dramedy” because it’s funny enough while not being a laugh riot, with just enough angst thrown in. 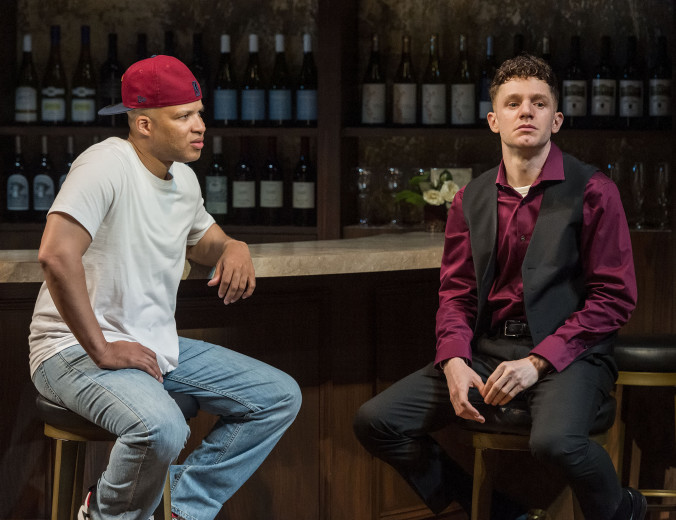 Playwright Rajiv Joseph is a Cleveland native, which I’m assuming is why he chose the perfect sports star as the centerpiece of this work. The arc of LeBron’s career has been as truly amazing as his moves are.

I’ve seen two of Joseph’s previous plays—one, Archduke, I shockingly really liked, the other, Bengal Tiger at the Baghdad Zoo, not so much. (Actually, not at all.) But one about sports speaks my language, so I’m all in on this one.

I totally identified with so much of the narrative. First of all, I’m a rabid basketball fan, and have been on the whole LeBron James journey myself. All that NBA talk was speaking my language. And I, just like the character Matt, am far from phone-obsessed, so his technical nescience was extra-amusing to me. I still do not text! And I had a flip phone for as long as I could hold out before Mr. X made me break down and get an iPhone. And at one point in the script, Matt declares that he’s giving up sports. I totally understand that sentiment because I say that all the time! When my teams lose, I tell Mr. X that I have to be cut off from sports right away. So, Matt is actually…the male me!

But no worries for you non-sports fans–King James is easy to watch and follow. I do feel, though, that you have to know at least a bit about basketball from the ’90s up to today to fully appreciate all the dialogue. Judging by all the laughter in the right places, I’m assuming the opening night audience knew something of the sport. 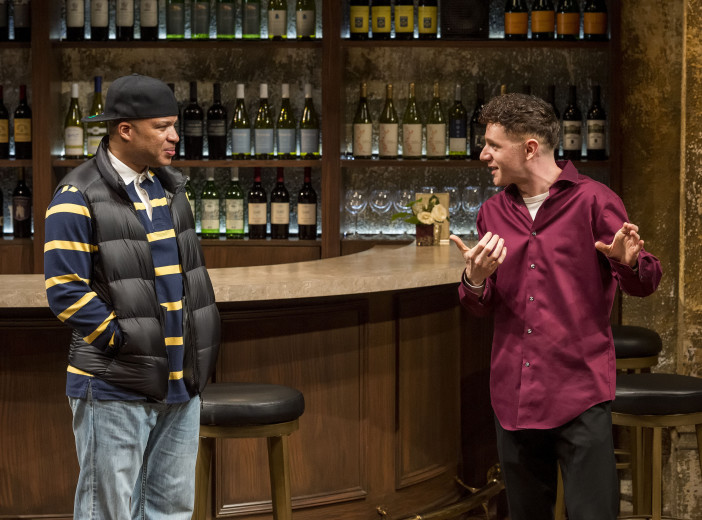 The play is presented in two acts, each with a pause in-between its two scenes. I feel the playwright did that to mimic the four quarters of basketball games, with the halftime in-between. I was happy about that division because, sports fanatic that I am, I always refer to “intermission” as “halftime.” By accident, not pretense. (When I used that term to Billy Porter and his friends a few years ago, they laughed uproariously. I was glad that for once, some theatre-going peeps didn’t mind my consistent error!)

Of course, I got every reference in the script, because I was a major LeBron fan back then*, as well as being sports-obsessed forever. (One of my best friends back in the day got rid of me because she said I care about watching sports too much! I got her point because I cry just talking about Roger Federer, and I bawled all the way through another friend’s thirtieth birthday party the day that the Yankees made Alex Rodriguez retire!) I just hope that King James‘ audience members who don’t give a hoot about b-ball will appreciate the show as much as I did. *[Note: I’ve written about LeBron many a time over the years, even before his famous “I’m going to take my talents to South Beach” debacle, which happened exactly a dozen years ago five days after this play ends its run at the Taper; you can still read my thoughts on it right here: itsnotaboutme.tv/news/sports-lebrons-announcement.]

You know I rarely get into the deeper meanings of plays. That’s for viewers to decide for themselves. All I really care about is if I’m entertained. And I was definitely that at King James. The action doesn’t really need more analysis than that, (even though I’m sure most other reviewers will do that for you.) Seeing it was a good use of my time, which makes me happy. That’s all I need. 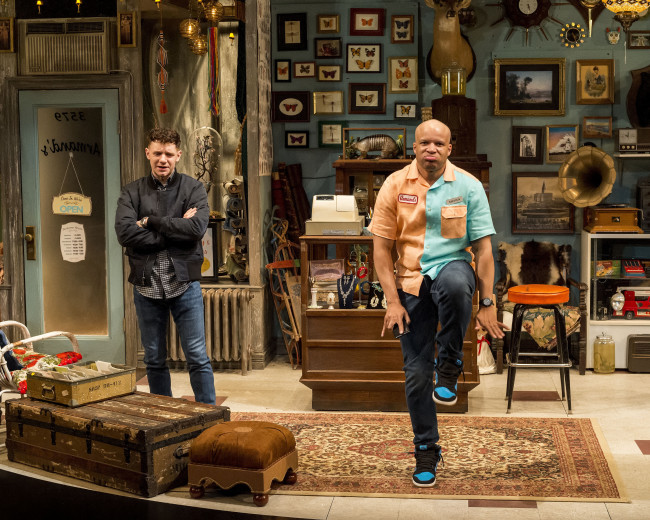 Also making me happy is Todd Rosenthal’s very interesting set design, which adds to the overall charm of King James, especially in Act II, when it feels almost like an additional character.

A very clever touch of the entire presentation is that a DJ, Khloe Janel, plays fabulous music before, at intermission, and after, from a window off to the side of the stage. The show begins with Marvin Gaye’s incredible National Anthem from the 1983 NBA All-Star game. There’s never been a better rendition of that classic song, and I can guarantee there never will be. In this instance, it sets just the right mood from the get-go, for the few of us who know what it was. Perhaps there should be some sort of announcement of what it is so audience members born in the ’80s and later will know how it pertains to the tale. But everyone should love it, even if they’re in the dark as to what it is. (I had to play it again on-line when I got home. OMG—was Marvin special!)

On opening night, when the presentation was over and the great music was still going, just as I was thinking that if krump dancing Mr. X had been there with me, he would have started a dance party right in the aisle, I looked across the theatre and saw a couple of dudes going for it themselves. And they looked great! I love a show that has people feel so good after it. 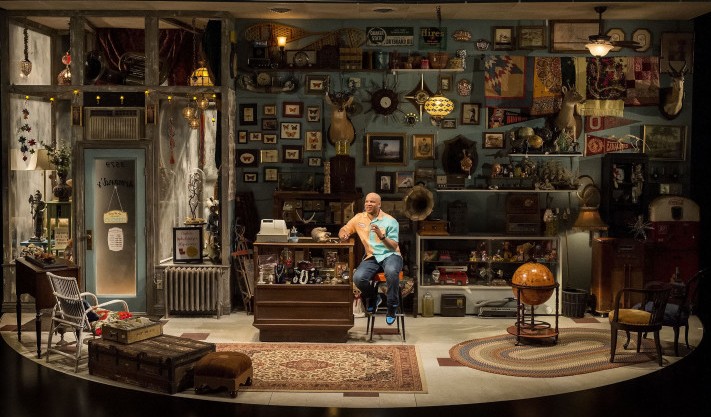 Now that the production is playing in LA, I wonder if the real “King James” will grace the Taper with his presence during the run. Incognito, of course.