Trending
You are at:Home»THEATRE»THEATRE: INDECENT
By Karen Salkin on June 14, 2019 · THEATRE

What a perfect play to have opened on Pride Day! 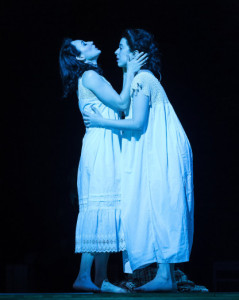 Elizabeth A. Davis and Adina Verson. Photo by Craig Schwartz, as is the one at the top of this page.

Indecent tells the history of the ground-breaking Yiddish play, God of Vengeance, which features two females in a relationship, and was written in…1907!!! It was a century ahead of its time, so this story of its origin is especially enlightening.

My, how times have changed–nowadays, it seems that it’s de rigueur for every TV series to feature lesbians—Riverdale, Burden of Truth, Jane the Virgin, Crazy Ex-Girlfriend, How to Get Away With Murder, For The People, even This Is Us! (And that’s just the network shows that I watch!)

Even though Indecent also touches on anti-Semitism, which is always a hard topic for my people, the entire presentation is enjoyable. (Just be prepared for being disturbed by a lot of it; though God of Vengeance was written by a Jewish guy, many people, myself included, feel that the narrative of that old play basically reflects badly on Jews. Go figure.) And despite the very serious subjects, there’s tons of humor throughout. (It has a very short run at the Ahmanson, so do not miss it!!!)

Although Indecent is a long-ish show, (it’s almost two hours with no intermission,) I looked at my watch only once, near the very end. It goes by much more quickly than many of the less-lengthy productions that I’ve been seeing recently. And you could hear a pin drop during the quieter moments on opening night. (There was not even any of the usual obligatory coughing!) 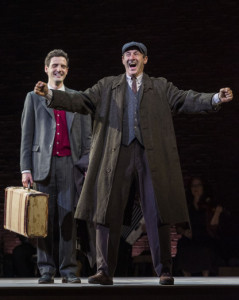 It definitely helps to know the basic plot of God of Vengeance, the play-within-the-play, going in. So here it is in a nutshell: a religious Jewish man owns the brothel that he and his family live above, and his daughter falls in mutual love with one of his prostitutes, (who is a female, of course.) How daring was that writing for 1907??? Heck, a story like that would not even be accepted in some backwards places in this country today! (Sad, right?)

In turn, Indecent brings us the story of that play being written and produced. And shunned.

Can you imagine if many Broadway shows start following the Indecent template? Instead of doing more revivals, they’ll give us bits and pieces of the original shows as part of their production histories! It would be sort-of like VH1’s Behind the Music series. It could be a really fascinating new trend. And please remember that you read that prediction here first! (Now someone just has to write the history of the making of Indecent! That, too, is a fascinating true-life tale.)

A bonus of this show is that, in addition to the double fascinating stories, (one of the show itself, and the scenes of the play it’s about,) although Indecent is not a musical, per se, we are treated to wonderful music all along and occasional very good singing accompanied by some ethnic dancing. 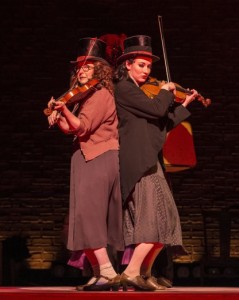 Lisa Gutkin and Elizabeth A. Davis. Photo by Craig Schwartz.

The show is performed by seven actors, who each portray multiple characters, along with three always-onstage musicians, who add so much to the proceedings. (And I appreciate that they’re credited on the front page of the program right along with the speaking actors!)

That trio (of Lisa Gutkin, Matt Darriau, and Patrick Farrell,) actually received the most applause during the introduction of the characters on opening night, before the action even began! As someone who always feels that musicians on Broadway do not even come close to getting their full due, I loved that. (They’re never even credited on the Tonys!!! I looked again when this year’s awards were broadcast that very night, and even the names of the “utility” crew were on the screen at the end, but not one mention of the people providing the music for a show where that art is paramount!!! Shame on the Tonys for that perpetual omission!)

The tunes in Indecent, of course evoke that of Fiddler on the Roof, which makes it sound sufficiently ethnic. With a violin, clarinet, and accordion, the style is beautiful traditional Yiddish klezmer. 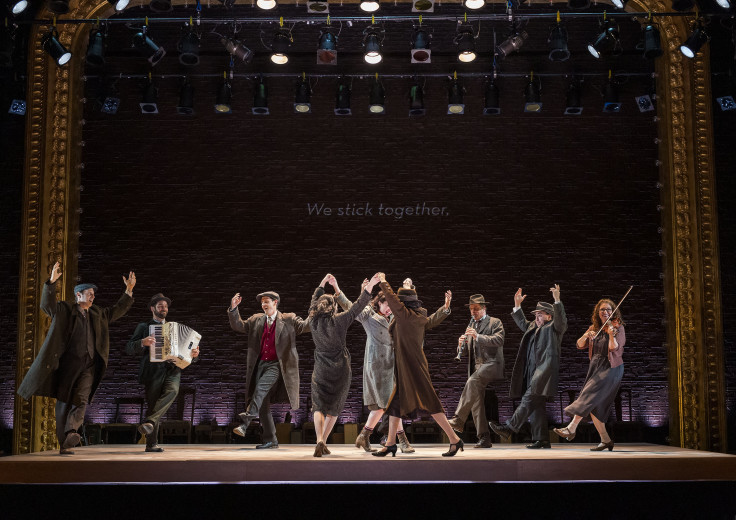 The music and much of the occasional dancing reminded me of when I used to be one of the personalities on the Chabad Telethon. Except in Indecent, the men and women dance together.  (The first year I did the telethon, when I began to dance with the assemblage at the end of the telecast, one of the men kicked me to get out of their circle! Lovely.)

This tale is of a Yiddish play, but, of course, the one we’re seeing has to be all in English, so we can understand it. But to give us that flavor of authenticity, the powers-that-be at Indecent let us know when the characters would really be speaking Yiddish in the story, (or occasional other languages, if I remember correctly—I was too riveted to take notes this time,) with writing on a big screen at the back of the stage. Very creative. (Those kudos may go to author Paula Vogel and/or director Rebecca Taichman.) 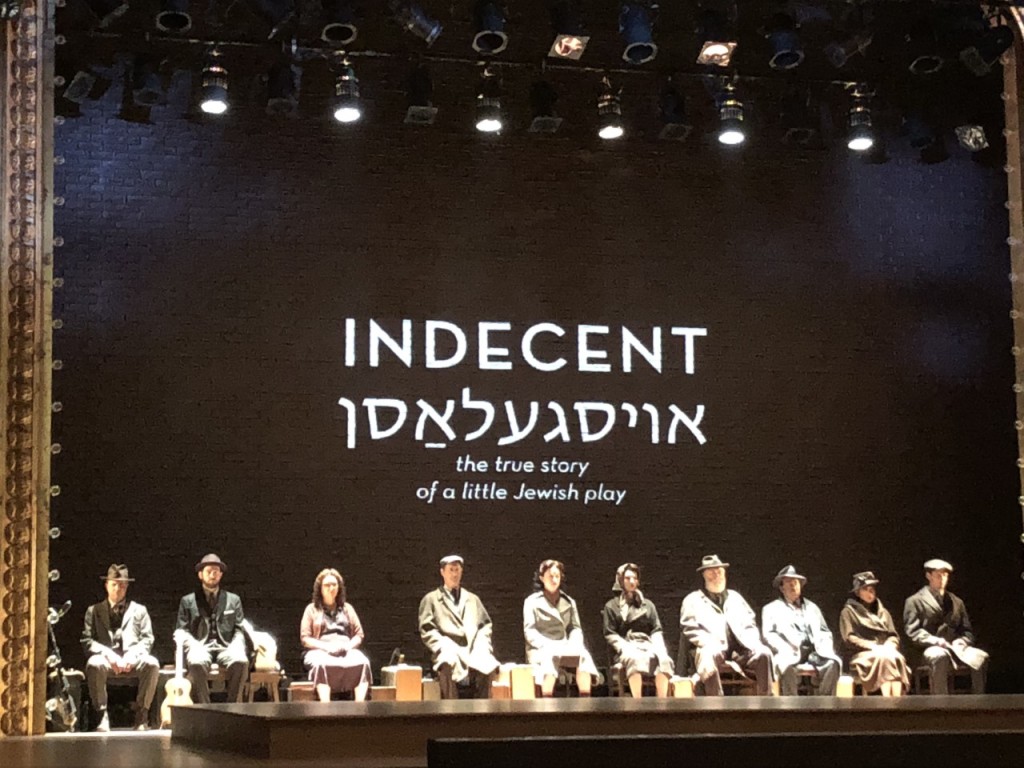 The company on stage before Indecent begins. Photo by Karen Salkin.

Even though the cast is all outfitted in mainly drab earth tones the entire time, (to fit the scenarios,) we can tell which character they’re portraying at any given moment by the simple change of a sweater or scarf. It’s all very well-done by Costume Designer Emily Rebholz.

Actually, every aspect of Indecent works—the writing (which, of course, all the rest of the goodness springs from,) direction, music, acting, lighting, and little special effects that take us by surprise each time. There are some very powerful visuals, especially at the beginning and the end. (And I’m advising you that herbal cigarettes are smoked from time to time. I had excellent seats and could smell them, but even with my asthma, they didn’t bother me at all. So just cover your mouth and hold on for a minute if you’re not a fan.)

I do have to say that, as with all theatrical and film works, the audience has no idea of how much of the history portrayed on stage is actually totally factual. Much of it I was able to substantiate in my post-show research, but private conversations and some exact happenings cannot be confirmed. So just remember that when you see it. (I’m still traumatized from watching two different biographies of Jesse James a few weeks apart when I was younger, and seeing them tell his legend so differently! That was my first introduction to “artistic license.”) 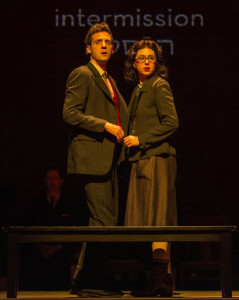 Joby Earle and Adina Verson. Photo by Craig Schwartz. (And even though the sign behind the actors reads “intermission,” there is none in this play.)

In keeping with the theme, I’m sure that many of us, especially New Yorkers, have stories in Yiddish, or about their experiences with that special language.

Even being an Ashkenazi Jew myself, until recently I had no idea if Yiddish was a real language or just one where we have fun words, like verklempt, mishegas, and shonda! I didn’t even know if it had its own alphabet, as Hebrew does, until I looked it up right now! (It does not—it’s pretty much Hebrew characters, with a few exceptions, like for vowels. Oy—don’t ask. Sigh. Vey iz mir.) Here’s my own personal story about that nescience:

In my clubbing days, one of the girls who had become one of my best friends still lived with her observant Jewish family because she was in college, (as most of my pals were back then, actually!) She invited me over for Shabbat lunch with the fam, and I panicked about attire; my wardrobe consisted of tiny club dresses! But I managed to come up with one ankle-length number, and paired it with a conservative vest. When Mr. X saw me on the way out, he asked what I was dressed-up as! So I explained that I was trying to look “hamisha” for them.

When I got there, my friend asked me the same question because everyone else was in very casual clothing! I explained it was my attempt at looking hamisha. As the day progressed, I wracked my brain to use every Jewishy words I had heard growing-up, in an effort to pay my respects to her religious family. When she walked me out at the end of the day, she laughingly told me that her family had no idea what I was talking about all day! I said, “I was speaking your language!,” to which she replied, “I think the words you’re using are Yiddish. We speak Hebrew.” I’m ashamed to say that back then, I thought they were one and the same, and came under the heading of “speaking Jewish!” Oysh.

So, to sum up after all that personal mishegas of mine, I was verklempt during much of Indecent. So don’t miss it, or that will be a shonda!!!