Trending
You are at:Home»THEATRE»THEATRE: EVERY CHRISTMAS STORY EVER TOLD (AND THEN SOME!)
By Karen Salkin on December 18, 2019 · THEATRE

EVERY CHRISTMAS STORY EVER TOLD (AND THEN SOME!)

This show at the Sierra Madre Playhouse was actually the impetus behind my most fun holiday day this year, so that made it really special to me.

I usually eschew “zany” productions. But I knew that I wanted to go to the Playhouse in December, so I decided to throw caution to the wind and see their holiday presentation, Every Christmas Story Ever Told (and Then Some!) And it was mainly a lot of fun.

Part of the fabulous set. Photo by Karen Salkin, as is the one at the top of this page.

Mr. X and I did something different this time. Instead of attending opening night, we chose to see a week-end matinee a week into the run. And it was one of the most fabulous adventures we’ve had this year! The production was entertaining enough, (I’ll elaborate in a minute,) but it’s the entire experience of that area that made it such a wonderful day for us. And it was all centered around this show.

First of all, just driving into that town at this time of year made me feel like I was in a Hallmark holiday movie!!! I love that feeling. Even Mr. X got into the spirit.

Secondly, the Sierra Madre Playhouse has the most lovely people working there, many of them volunteers. I would love to be at a Christmas party with all of them. I have a strong feeling there would be an abundance of freshly-baked holiday cookies at the fete! (And that I would win the Ugly Christmas Sweater Contest!)

Then the lobby display, curated by Kista Cook, is its usual charming self. All of the ones I’ve seen there over the years are so clever, but this one has the added specialness of being interactive. At one end is a beautiful Christmas tree that you can use as a photo op in several different ways. You can just stand in front of it like normal people, or you can stick your head through holes so that you appear to be Santa and Mrs. Claus. And the lovely women in the lobby enthusiastically offer to take the pictures for you, (while kvelling over absolutely every single thing about your holiday attire, to boot!) 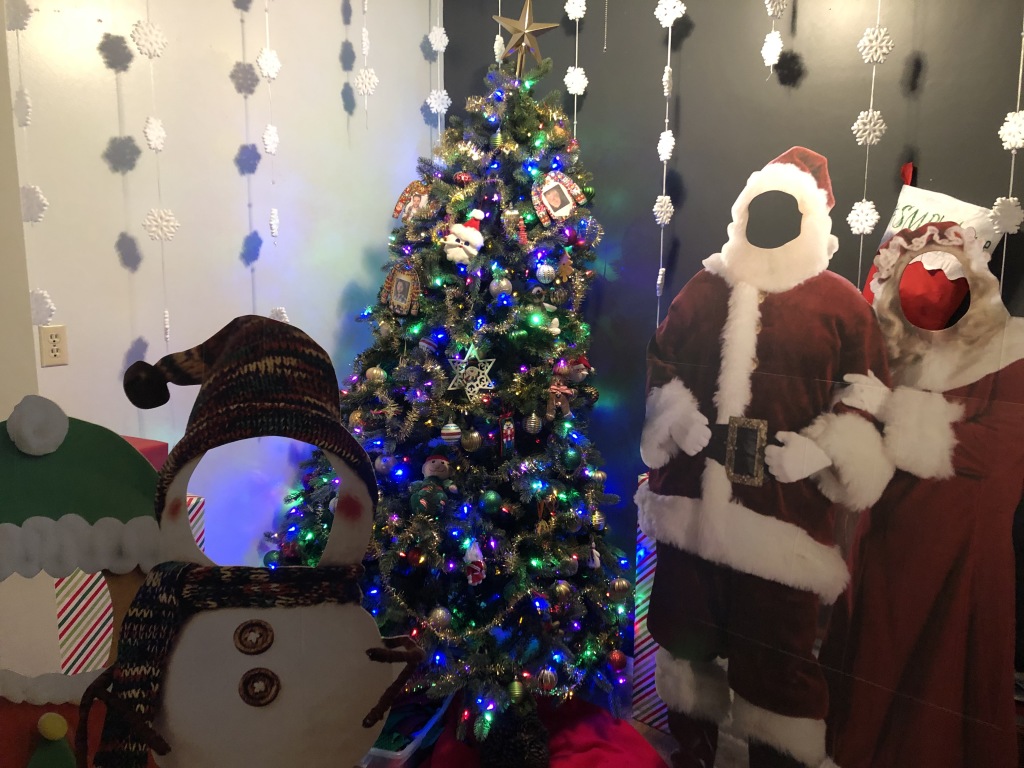 The fun photo op in the lobby. Photo by Karen Salkin.

And on one of the walls is a giant poster board for you to color on with the plethora of markers in containers on both sides of it. There are some already-drawn outlines for you to color in, such as Christmas sweaters, or you can just freestyle, either with a drawing or words.

I, shockingly, drew only a very small Christmas tree, (because I didn’t want to take up a lot of space when the show goes for three more weeks.) Let’s see if you can find it in this picture. (Consider it to be the Where’s Waldo of the holiday coloring world. I’ll tell you where it is at the bottom of this review.) 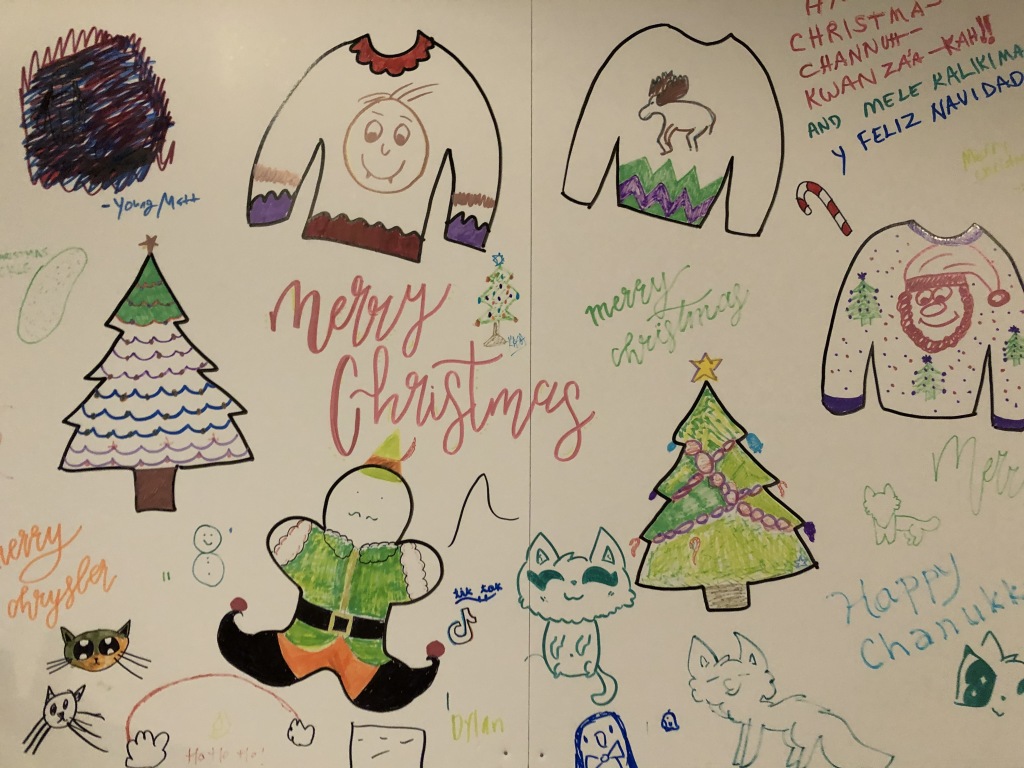 Try to find Karen’s little weenie tree on this colorful board. (Answer at the botttom of the review.) Photo by Karen Salkin.

Then comes the actual show, which offers a lot of laughs, none moreso than when the trio dances like the Charlie Brown characters, and then performs a hilariously abbreviated version of The Nutcracker ballet, choreographed by Cate Caplin, (whose name I’d like better with “K”s, of course. But isn’t that the moniker of Reddington’s clean-up person on The Blacklist?)

I was shocked to learn that Every Christmas Story Ever Told (and Then Some) has been around for sixteen years! I can’t believe it. Neither Mr. X nor I had ever heard of it before. And we both thought that the three men who are performing it at SMP—Dale Sandlin, Garrett Botts, and Philip Rossi–are a comedy troupe who put it together just this season! 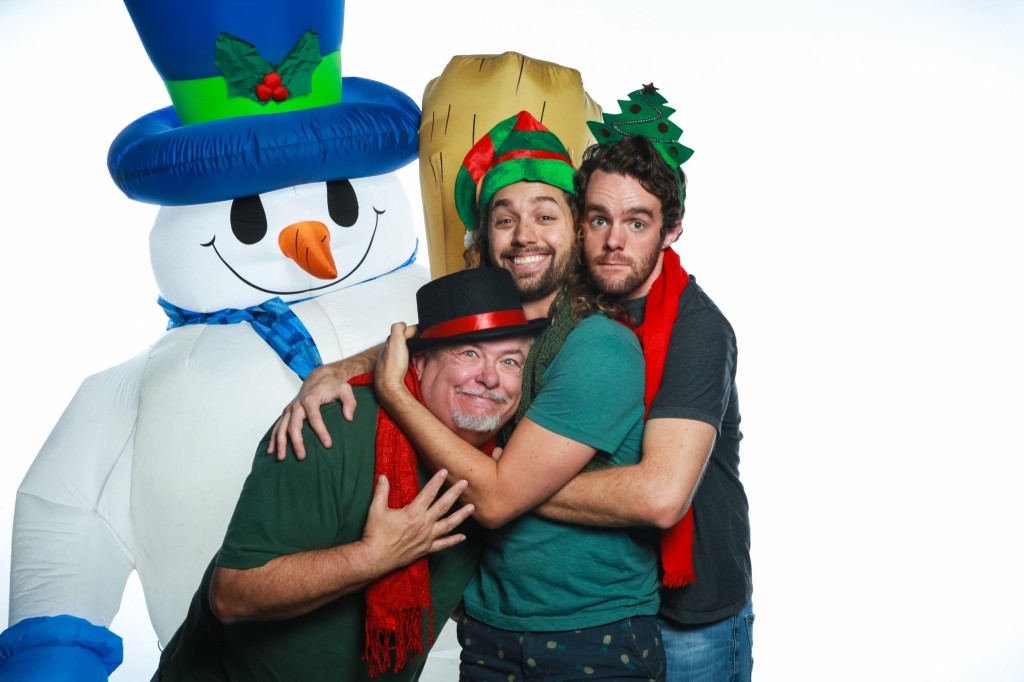 I don’t have any pix of the actual show, so here’s one of the cast: (L-R) Dale Sandlin, Philip Rossi, and Garrett Botts. Photo by John Dlugolecki.

Maybe that’s because the action is really tight. It just moves along with no downtime or snafus. And trust me—a lot happens in the two hours! It goes a mile a minute, with tons of surprises. There’s no real story to it—it’s just mostly clever bits from many of the holiday tales we already know, with some amusing factual tidbits about how Christmas is celebrated around the world. And here’s a bit of advice—look good because there’s some audience participation.

Speaking of the audience, the one we saw it with enjoyed it all immensely, while we were entertained by about two-thirds of it. It gets a tad bogged-down in the middle of the first act, but the end of Act I closes with a bang with those comical dances I just mentioned. And Act II pretty much consists of a very clever mash-up of our two favorite holiday classics, A Christmas Carol, (which we love only the Alastair Sim version of, which will be news to everyone concerned with this show!,) and It’s a Wonderful Life, which is where our beloved Clarence got his name. So we really appreciated that whole section, and left there with big smiles on our faces.

For this one, I have to give major props to…the props person, Joanne McGee, who also painted the set with Orlando de la Paz. It’s gorgeous! It’s the most festive set ever, designed by SMP’s Artistic Director, Christina Lebano, and Every Christmas Story Ever Told (and Then Some) director Gary B. Lamb, whose program note told me that he and I have the same life-long journey with Christmas. (As a matter of fact, his last two paragraphs could have seriously been written by me!)

And special kudos go to Music Director Sean Paxton, who’s on stage the entire time, and not only adds tons to the proceedings with his almost-constant piano playing, but with an occasional comic turn, as well. I adore double-duty peeps! 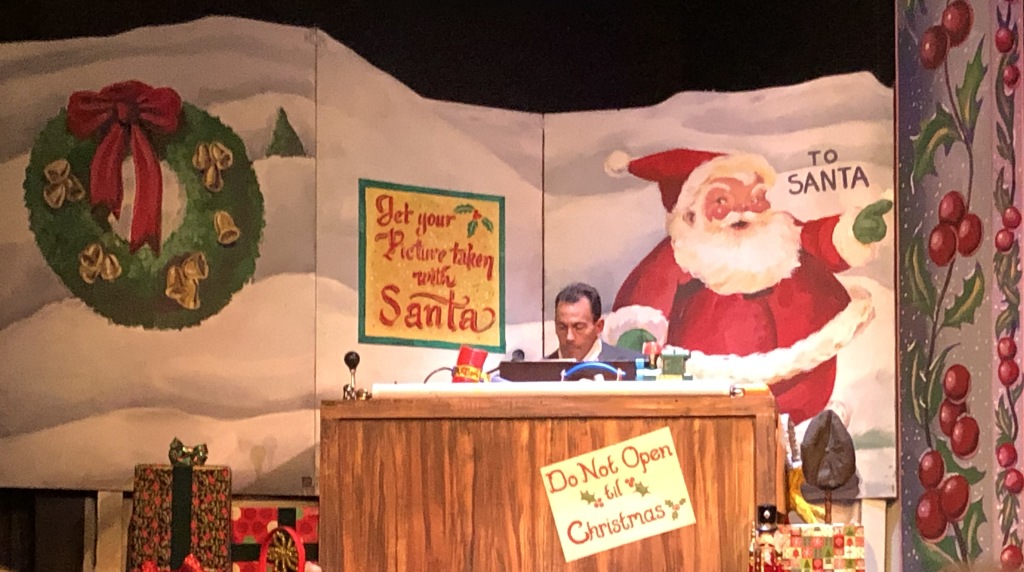 I advise that when you see this show, (which you absolutely should,) get there early for the lovely holiday music that Sean entertains the audience with as they get settled.

If you’d like to copy Mr. X and my entire marvelous day in and around Sierra Madre, here’s the rest of our story. When we left the theater, we discovered delicious pizza around the corner, and then we proceeded on to two of our favorite holiday activities, (which we would be too lazy to set out to that area to do otherwise, but being in that neck of the woods for the show afforded us these awesome opportunities.)

The first one is seeing all the beautiful holiday displays in the Hastings Ranch area, which is just a hop, skip, and a jump from the Playhouse. They officially start the lights at 6 PM every night, but we were there at 5 PM and it was already fabulous.

Then we drove a few minutes away to the Fair Oaks Pharmacy in Pasadena to share a delicious ice cream sundae, nestled among all their stunningly and uniquely decorated Christmas trees. I always love being there. (And purchasing multiple ornaments, of course.) 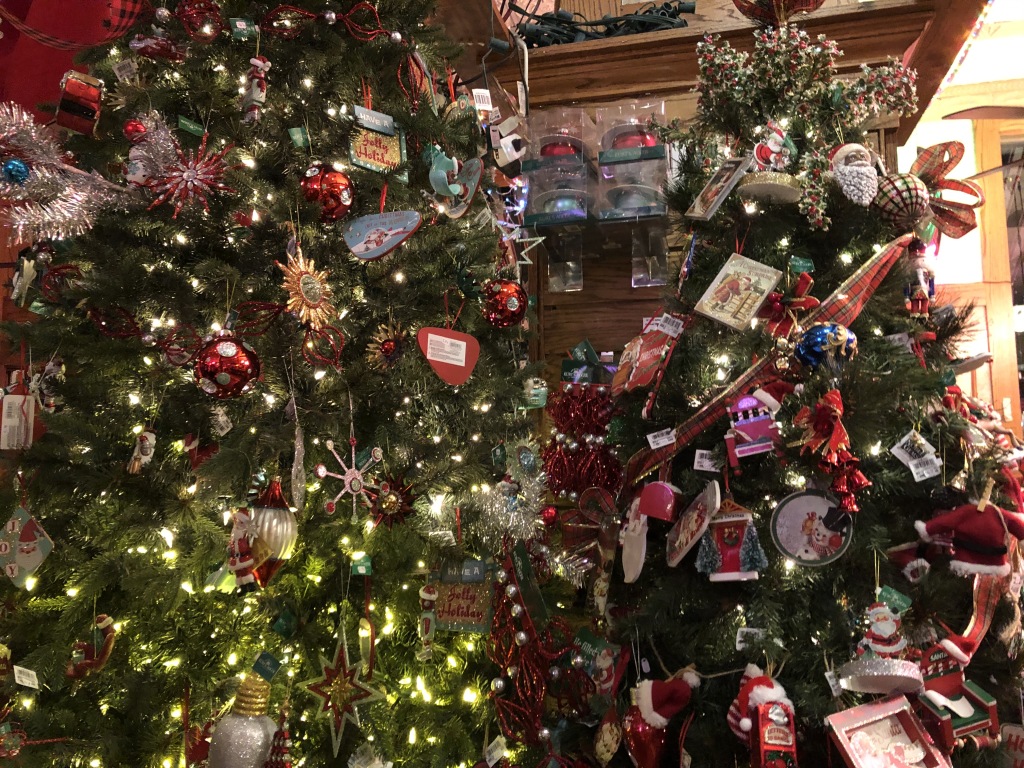 I could spend a whole week in that town at this time of year. (Or at least a week-end!)

I wish all of you the same happy time, and I thank the Sierra Madre Playhouse for always gracing us with holiday fare! No December would be complete without a visit to that wonderful theatre!

Answer to where my drawing is: It’s right in the center, nestled in someone else’s red “Merry Christmas.” I signed it with my lifetime artist moniker, “KASA.” Click on the pic to see it close-up.