Trending
You are at:Home»THEATRE»THEATRE: DEAR EVAN HANSEN
By Karen Salkin on October 25, 2018 · THEATRE

I suggest that everyone see Dear Evan Hansen, not because I agree with the Broadway masses that this is the greatest show ever, (because I do not,) but because its popularity is a musical phenomenon.  And you really have to decide its merits for yourselves.

Even though I’m probably about to lower your expectations, (which I consider to be a good thing, in all situations,) I’m, as always, so grateful to the Ahmanson Theatre for affording us Angelenos the incredible opportunity to see all these Tony-winning Broadway shows. I hope that everyone appreciates that service as much as I do.

And I’m also very thankful to have been included in the star-studded and oh-so-exciting opening night, (which you can read all about in my next Celeb Sightings column.) 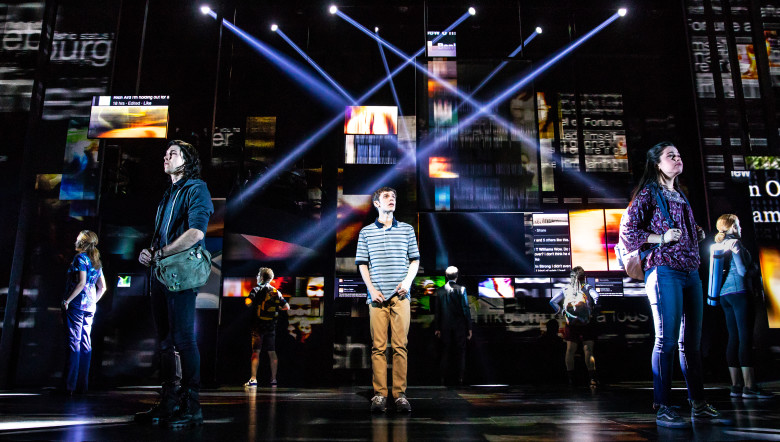 Before I share my exact thoughts on the show, I say go see Dear Evan Hansen, if you can, even though the entire run is just about sold-out.  (It has already shattered the weekly box office records in the over-fifty-year history of Center Theatre Group! Wow.) But I’ll have help for you to get tickets at the end of this review. (Only for those of you who read it all, of course.)

Now let me tell you that, despite all the accolades and awards, I was not as hyped about seeing this show as just about everyone else in the world is.  I’m pretty sure I have a differing opinion from most, but people singing about suicide and deception is just not up my alley.

But I do very much appreciate that Dear Evan Hansen seems to mean so much to a lot of people.  And if a musical can do that, it doesn’t matter what I think of the particulars of the production. When I was discussing it with Nina, one of my most intelligent friends (who’s already planning on seeing it soon,) she told me, “Mental health awareness is so important!  It’s wonderful that our theatres are talking about the topic because it’s such a societal concern right now.” And I agree. (More on all that in a minute.)

This top-quality production at the Ahmanson is the First National Tour, and I cannot imagine even Tony winner, Ben Platt, singing better than the star here, Ben Levi Ross. What a great voice this immensely talented guy has! And from where I was sitting, where I couldn’t really make-out the actors’ faces, just their movements, Ben’s physicality really reminded me of Mikey Day on Saturday Night Live, which added to the mirth of the first half for me.

But then, as amusing as Act I is, (well, as funny as a tale of suicide can be,) Act II is heavy and depressing. Again, I’ll give you my thoughts on the actual story in a moment, but first let’s get to the many positives of this show, which won six Tony Awards last year, including Best Musical.

The performances are all excellent. The stand-out for me, outside of the star, is Jared Goldsmith who plays “family friend” Jared Kleinman. It’s a very entertaining role to begin with, and he nails every nuance of it.

As one of those people who is far from a fan of the movie La La Land, I was pleasantly surprised by this music, which was written by the same multiple-award-winning duo of Benj Pasek and Justin Paul. Every single song was so well-received by the audience I was in, as I’m sure it always is.

The musicians are spot-on and I love that they’re on stage the whole time, yet unobtrusive. When the story got too tough for me, I was able to just concentrate on the band. 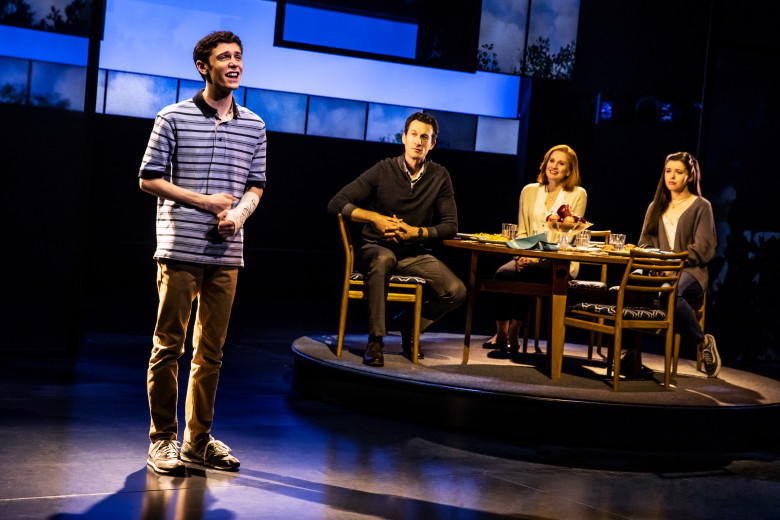 I also appreciated that the set seems so close. I was seated the furthest back that I’ve ever been in that theatre, yet I did not feel that way at all.

And shallowly, I adored seeing my own favorite gray sweatshirt up there! It seemed that every character wound-up wearing it, the significance of which I have a feeling has eluded many. I love my own so much that…I have two of them! The very same one. So, big props to the wardrobe peeps.

What Dear Evan Hansen portrays about social media is sooo correct. As important as that medium has become for connecting, informing, and publicizing, it can also be a dangerous tool. I totally understand how it can make people feel bad about themselves, and occasionally even threatened. To my eye, it’s also made people ruder. Now they feel they can say anything to anybody at any time. So that powerful message is a big part of this whole presentation.

And this is the first musical that has become a novel after it was already a theatre offering; usually, musicals are based on a book, not the other way around! The novel of Dear Evan Hansen is written by the aforementioned songwriting duo, the playwright Steven Levenson, and one other author. I wonder if they made this very difficult topic somewhat amusing in the book, as well.

Okay, here goes: To keep up the show’s theme of “you are not alone,” I have to be honest about my feelings about Dear Evan Hansen and say you are not alone if you don’t get the fuss about it. I’m with you. Only I have a feeling that few are wont to admit it, for fear of being ostracized. The show is all good enough, with all the positive points I already mentioned, but the story itself just does not cut it for me.

I had researched the narrative last year, when it won all those Tonys but looked so confusing, and I must say that it is an interesting story; I don’t know how anyone came up with it. (The rumor is that it was inspired by something that happened in Benj Pasek’s high school, but I cannot confirm that it’s true.) I don’t want to ruin it for anybody, so if you don’t know the story already, and don’t want to, just skip down four paragraphs.

The scenario is that of a suicide, followed by a complicated lie that blows up in Evan’s face, but then all gets miraculously worked-out in the end. So, here’s what I have to say about that: there is absolutely no way that this kid, who is already socially awkward and isolated and semi-suicidal, and then has people discover the falsehoods he not only started but let snowball, (the uncovering of which not only made him look super bad, but also lost him the girlfriend he had always wanted, and the entire family he craved, including a father figure to play ball with, not to mention the money for college,) wasn’t then pushed over the edge to at least harm himself after that revelation. Period. 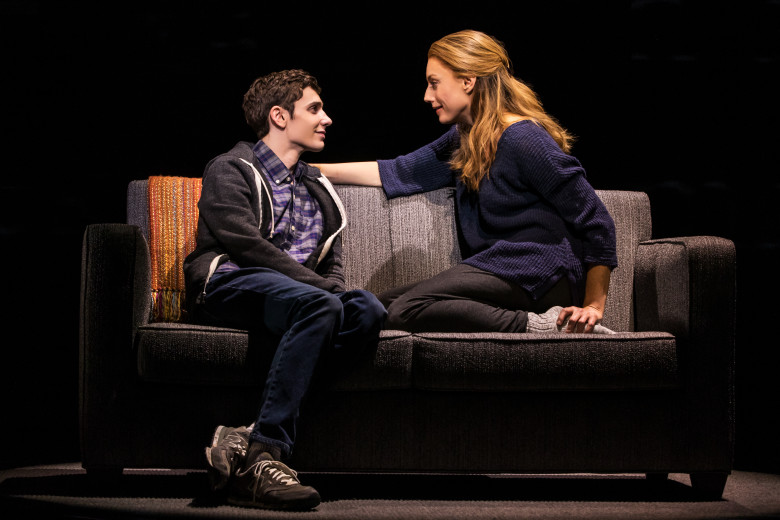 But this musical wants us to believe that because his mother sings him a song about that she loves him and is not going anywhere, Evan somehow then becomes normal after all that stress and lying and losing. And that within a year, he’s standing straight, speaking normally, holding down a job, and in community college! I think that there really needs to be a sequel to this show to demonstrate that journey because I think that’s what would be really helpful to troubled teens. And adults, too. (You’re welcome, producers, because I have a strong feeling that you’ll be following my advice. Audiences would go wild for it! And this is copyrighted, so everyone can know that they saw my great idea here first!)

Dear Evan Hansen is always touted to help people in emotional need, shall we say, but I did not see any of that help; I just saw a really confusing story with a very unrealistic ending. Sorry to the fans, but you know that I always call ’em as I see ’em. (And not to stick-up for myself, but several others who have seen the show and heard my thoughts prior to this review being published, agree. They just don’t want to say it out loud.)

As a former teacher, and surprisingly just about as importantly, a former club promoter, I have seen more than my share of young people with social anxieties. And I can tell you that not one single one of them got better in that short span of time. Even with my caring self as their helper. If Evan’s tale happened to someone in real life, and he or she was in that bad a state as he was when his world fell apart like that, they would need intensive therapy for quite a while.

So to believe the happy ending of this story, one would have to seriously suspend knowledge of the real world. So that’s why I’m a tad iffy about giving Dear Evan Hansen so much importance to people who are contemplating harming themselves, in any way. I really don’t see how it helps.

Maybe all that is why this show just did not get to my soul. For comparison, I weeped aloud at the Princess song in Shrek, The Musical, yet did not shed one tear, nor even got the least bit choked-up, during all of Dear Evan Hansen, which should be a tear-jerking show. But maybe that’s just me.

A sidebar to all of that is that, in real life, I usually hate it when people come clean to their loved ones about some small lies they told. They do it not for those others, but to unburden themselves, which is even more selfish, in most cases, than what they did to begin with. So I was not a fan of that happening in this saga.

And saga is exactly what this show is–it is sooo long. If it had gone on for one minute longer, I would have had to start penning a “Dear Karen Salkin” letter! 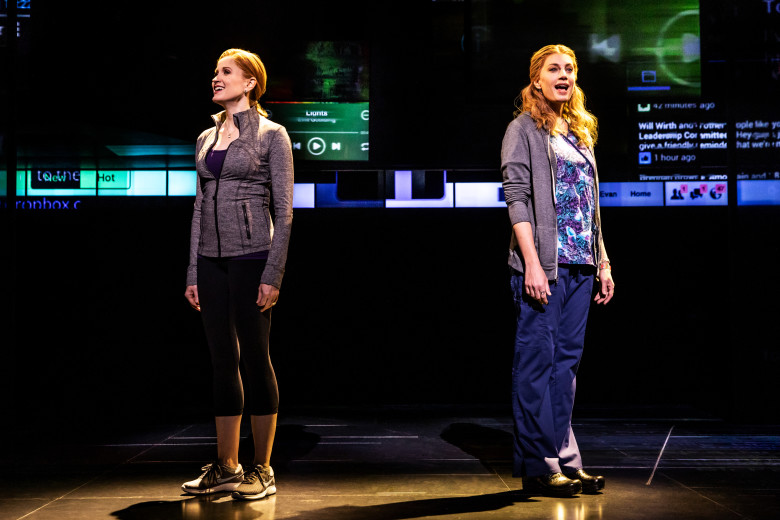 So that’s why I say, perhaps more than about any other musical, you must see this one for yourselves. If you take it as just a work of musical fiction, and not as the suicide-prevention piece that so many make it out to be, I think it will be much more of a success for you.

And, no matter what you think of Dear Evan Hansen, I’m glad it will still be here in Los Angeles for Thanksgiving.  I’m hoping it will make people more grateful for their own lives, and show them that things can always be worse.

Now here’s some really good news, (which you can probably use after all this suicide talk!): There is a digital lottery for affordable tickets to this show! If you win, you can purchase one or two tickets for only $25 each. Entries start being accepted forty-eight hours prior to each performance and up until the morning of the day before the performance. If you’ve been selected, they’ll notify you by email. Check-out their social media pages for additional lottery news and information. (Or just ask me in the Comments section below, and I’ll tell you what I know.) Best of luck with it!