Trending
You are at:Home»THEATRE»THEATRE: DAMES AT SEA
By Karen Salkin on June 25, 2019 · THEATRE

I can’t believe that I haven’t been to the Sierra Madre Playhouse, one of my favorite theaters in Los Angeles, in almost three-quarters of a year! So I’m thrilled that that situation was finally rectified on opening night of the really fun show, Dames At Sea.

It’s one of those classic old-timey musicals, (or, more accurately, a spoof of them from 1966, which is actually old-timey enough,) but, shockingly, I had never seen it before.

And I’m happy to report that the Sierra Madre Playhouse’s rendition of it is…charming! 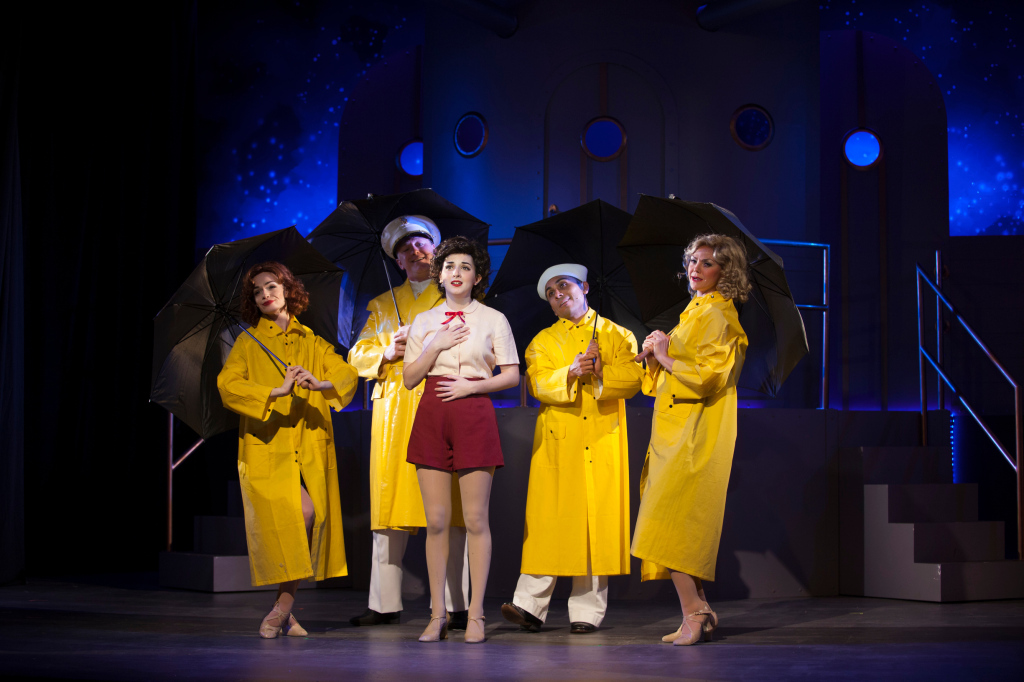 (L-R) Marissa Mayer, Chuck McLane, Katie Franqueira, Ruben Bravo, and Jennifer Knox. Photo by Gina Long, as is the one at the top of this page.

The musical was originally produced off-off-Broadway in the mid-’60s, and was done just as they do it here: with a cast of just six and one unseen piano player, as opposed to the 2015 Broadway revival which featured a full orchestra and big production numbers.

SMP went back to the Dames At Sea roots, which is perfect for this quaint theatre. No fuller music nor more dancers are necessary to this amusing tale.

This entire triple-threat cast is talented, especially all three females (Jennifer Knox, Marissa Mayer, and Katie Franqueira,) who are all superb tap dancers with excellent voices and quality comedic skills. Each one excels at one of those skills, (Jennifer at comedy, Marissa at singing, and Katie at dancing,) so they make for a perfect blend of performers.

They all really give their roles everything they’ve got, including the trio of males– Ruben Bravo, (who would be perfect for the next Christmas Panto in town,) Chuck MccLane, and Aaron Shaw. Broad comedy like this is harder to successfully play than people think, especially while tapping and singing. So big props to everyone on that stage, including the behind-the-scenes piano player, Sean Paxton. 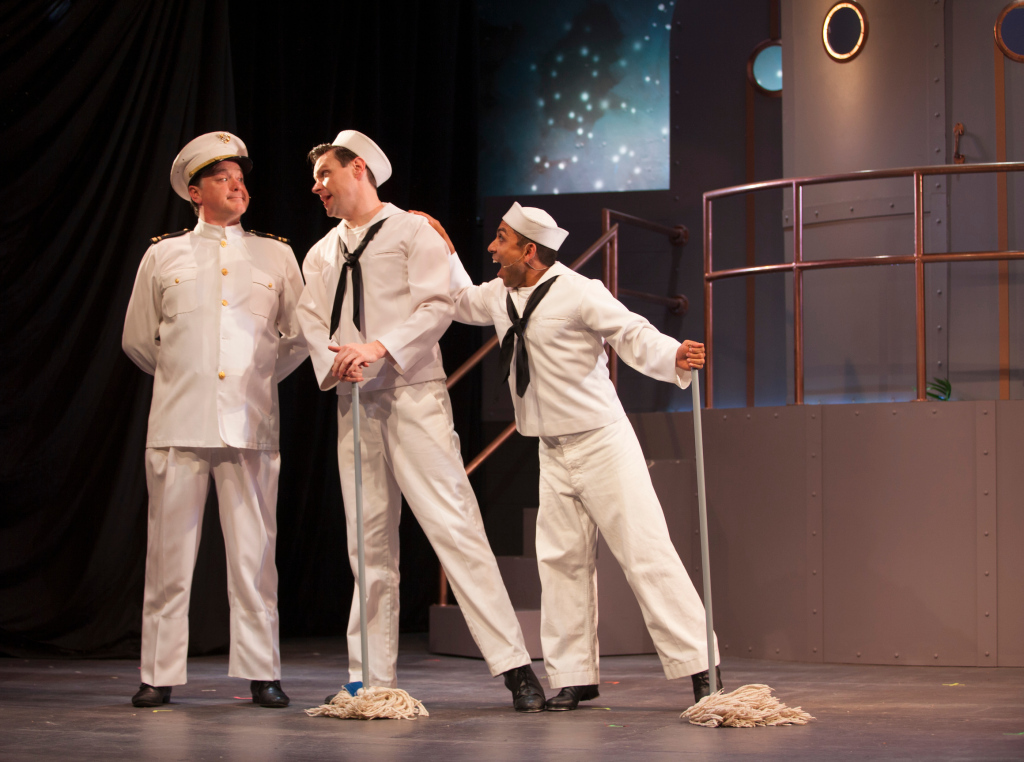 And plaudits also go to new-ish choreographer, Jeffrey Scott Parsons. This show is a lot of work in that category; it seems like there’s a tap dance number every few minutes! And I could not get enough of it!

Also, this is the most and best costumes I’ve ever seen in an offering at this theater! Major kudos to the Costume Designer, Shon LeBlanc, (who had originally done the honors for the first production of this musical at this same venue…twenty-six years ago!!!) The entire wardrobe, hair, and make-up team totally succeed with old-fashioned looks, especially on the girls. (And they were smart to highlight Jennifer’s arms—I’d kill to have biceps like hers!)

There are lots of clever touches throughout, especially in the second act number, The Beguine. My friend and I laughed and smiled the entire time. (And, because he had been in his junior high school’s version of this show back in the day, he even sang along a bit, too! But, thankfully, he did it not too loudly.) 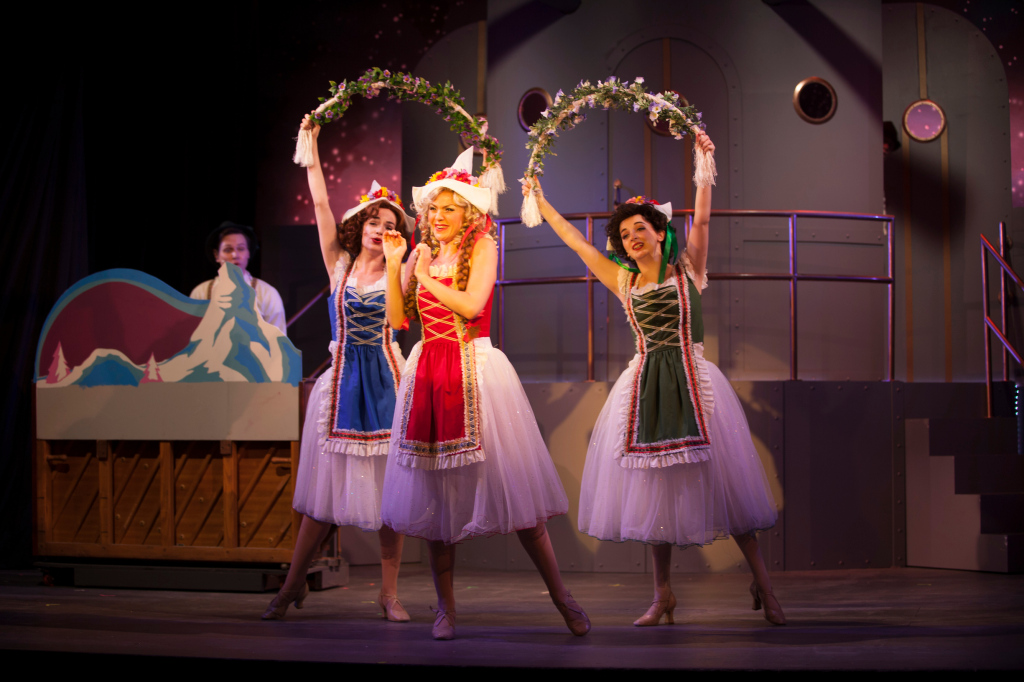 Speaking of the songs, I did not recognize any of them, but there’s one spoken line in the show, (“Remember—you’re going out there a chorus girl, but coming back a star!,”) that is special to me! Mr. X and I always quote it, but we had no idea from whence it came. And now we finally know it’s from Dames At Sea, even though we had never seen the musical in our lives! I love it when a mystery is cleared-up for me.

Whether you take this presentation as a serious old school musical, (as 42nd Street is,) or the parody of that genre that it’s meant to be, you’re in for a treat with Dames At Sea at the Sierra Madre Playhouse.

I love a sold-out opening night, and that’s exactly what it was last week-end! So let’s keep that full atmosphere going through the run! (And don’t forget to leave some time to peruse the always unique and fabulous, clever, informative lobby display! This time, there’s even a colorful area for selfies, complete with sailor hats!) 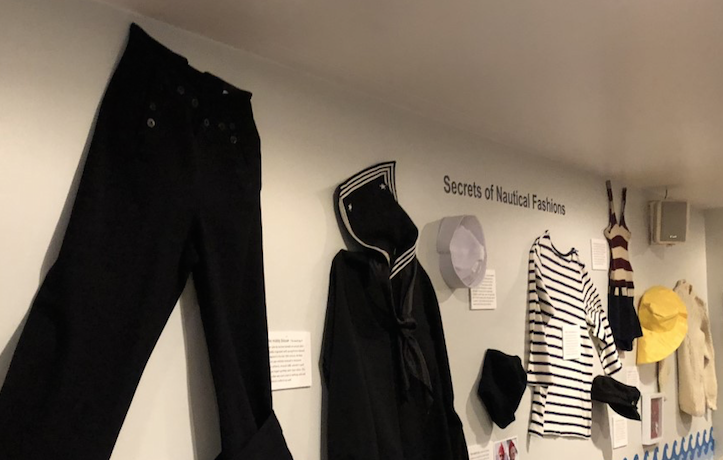 One of the lobby displays. Photo by Karen Salkin.

By the way–the Playhouse is also featuring a movie series to go along with the run of every show. They just began it with Dames At Sea, and the line-up looks really fun. It’s definitely worth checking-out, as is this live production, of course.