Trending
You are at:Home»THEATRE»THEATRE: CLYBOURNE PARK
By Karen Salkin on February 1, 2012 · THEATRE

I’m on a roll with theatre so far this year, because, in addition to everything else I’ve reviewed recently, I really enjoyed Clybourne Park at the Mark Taper Forum.

The “u” in the title misled me; I assumed it was some old-time English situation, like the movies Gosford Park or The Remains of the Day. Instead, it was a wonderfully-crafted play with two separate-yet-connected acts performed by the same cast with the same theme—modern-day prejudices brought to light by real estate situations. I couldn’t help but think of similar dilemmas that several of us are going through right now.

The first act takes place in a basic family home in Chicago in 1959. My mouth was watering over the wallpaper from that time! (When we just had to remove part of the wall phone in my mother’s house in Brooklyn, I saw a similar patch of original paper. Yum!) And the second half is updated to 2009 in the same house, but with different characters.

All the actors are excellent, but Jeremy Shamos is the stand-out…in both acts! Playing totally different characters. Yes, he does remind me of Ed Grimley a little in the first one, (the Martin Short character, who goes “mental” over Pat Sajak,) but it doesn’t matter. (And, actually, Christina Kirk brought to mind Kristen Wiig, also of SNL fame. Maybe it’s the Chicago influence.) 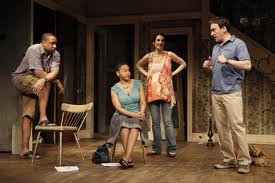 I don’t want to go deep into the race relations issues that the play brings up, as many other reviewers do. All you really need to know is that it’s funny, mostly painless, and worth seeing. If you’ve ever bought or sold a house, or moved, or even just lived, it should appeal to you, on so many levels. As many of you know, I really need as many laughs as I can get nowadays, and Clybourne Park provided some juicy ones, especially late in the second half. Very appreciated.

And with having to sell the beloved house I grew up in, sometime in the next year, this play gave me insight as to what I may have to expect. I just hope that I can bring the sense of humor to the just- about-guaranteed drama I’ll have to go through as playwright Bruce Norris brought to this fictional journey. Fingers crossed.