Trending
You are at:Home»THEATRE»THEATRE: CAMILLE
By Karen Salkin on August 10, 2022 · THEATRE

My friend Laura and I recently ventured out to Santa Clarita to see a show, and the entire experience was so interesting that, despite the run of the production having ended, I decided to still share the important parts with you. Including the personal mini-disasters! (Because, let’s face it, that’s the deets you all really want, right?)

The occasion was Camille, a new musical version of Alexandre Dumas fils’ novel, The Lady of the Camellias. I had missed the opening of Moulin Rouge, (which is an earlier musical take on the same topic,) at the Pantages Theatre a few weeks ago, so when I was invited to see this rendition of the classic tale, I figured why not? 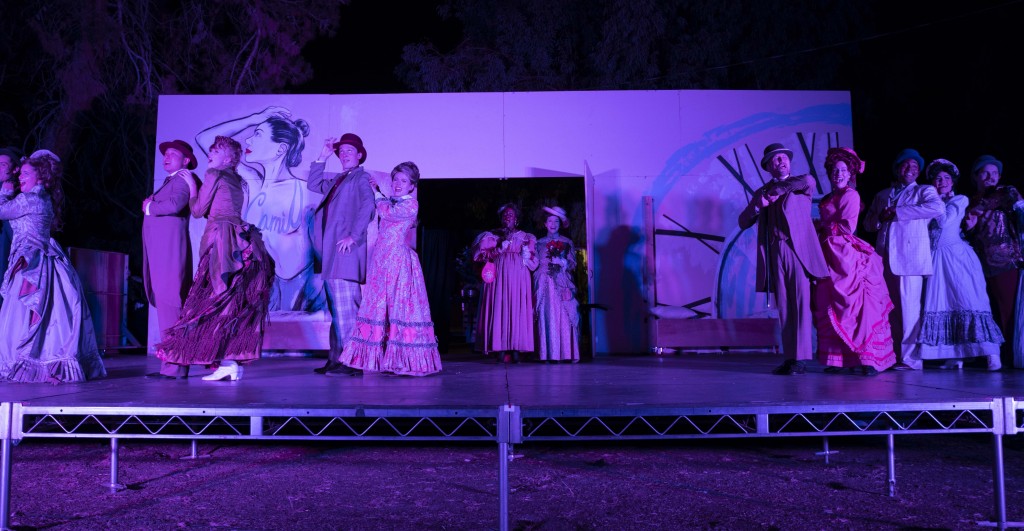 I love how everyone in LA complains about driving anyplace outside of a maybe ten-mile radius! I actually have a couple of fun friends who said no prob to driving to Santa Clarita for something different, even though I, too, think of it as a day trip! (But one I’m always willing to take—I love discovering new things in my own city!)

On an amusing note, you should see the planning Laura and I did for this one evening! (Except that we forgot to plan to bring blankets or even heavy sweatshirts, and we were freezing when the sun went down, even though the daytime temp hit around 98!!! And we could have used some old beat-up footwear, as well. More on that in a moment.)

Before I tell you about the venue, I must first laud a few of the performances in Camille. 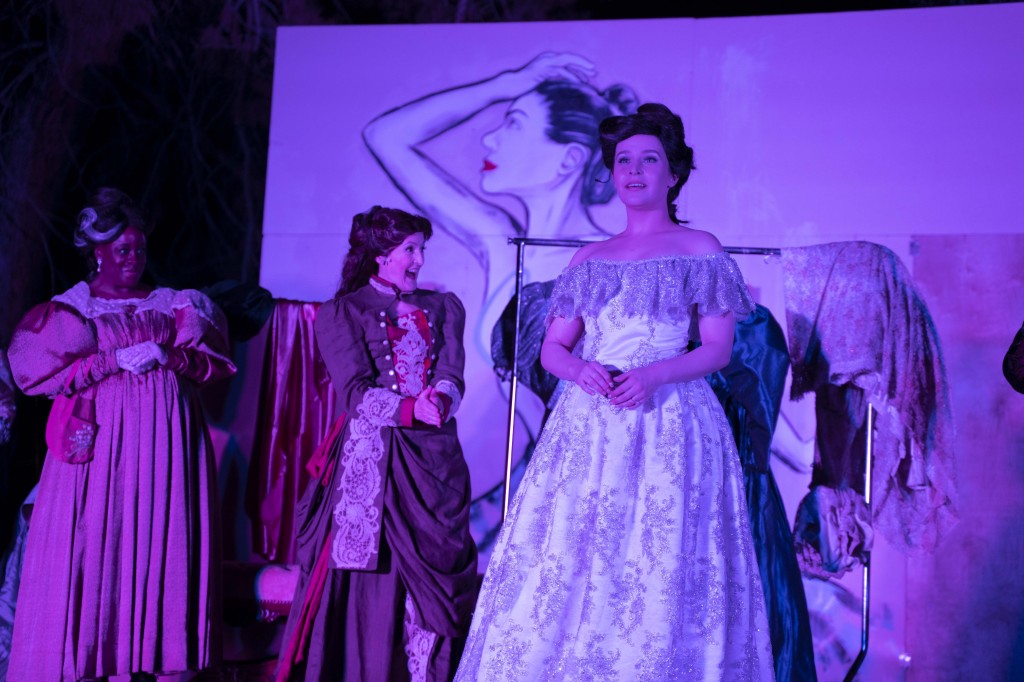 Our favorite was Nina Herzog, who played Nichette, the younger sister of Camille’s lover, Armand. Laura was impressed with Nina’s “beautiful voice,” which, as a fan of hers for several years now, I was already familiar with. She voices The Swan Princess for Sony, but she’s so cute and sparkly that she really needs to star in a live-action production for them! 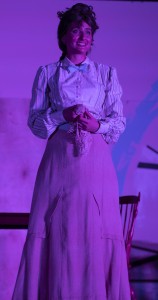 We also appreciated Jacquelin Lorraine Schofield, who played Nichette’s guardian, Dominique, and Talya Sindel, who played Julie, Camille’s handmaid, both of whom have lovely voices. We noticed that the audience perked right up whenever Jacquelin sang. Sadly, we didn’t get to hear Talya’s dulcet tones until close to the end; even though the show was already just about three hours long at that point, we wanted her number to go on longer.

On the male side, the wonderful singing of Nick Tubbs, (who attended UCLA, as Nina and I also did–Go Bruins!–so I already liked him,) who played Armand, fit the part perfectly. And Laura was especially impressed with Cornelius Jones, Jr. right off the bat; he acted as a sort of narrator who guided us along the way. His performance had just the right amount of energy.

And a major shout-out to the Music Director and sole musician, Mary Ekler, who sat out there in the cold, cold night, and played the piano just about non-stop for the entire three-plus hours!!! I don’t know how her fingers still worked during it! I just hope someone gave her a hand massage when the show was over. 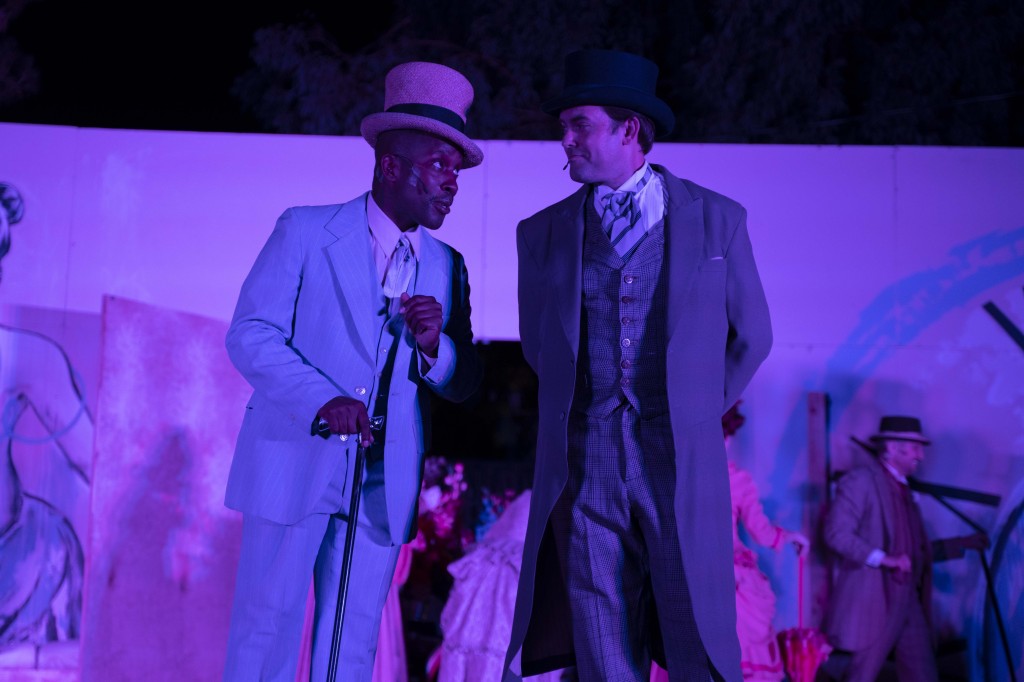 We also loved the many colorful and varied costumes by Shon LeBlanc. They were a highlight of the show.

Now here are the scoops on the venue. This was part of the Santa Clarita Shakespeare Festival, which takes place in Rivendale Park & Open Space out there.

Before we ventured out there, we got directions from a few sites, a couple of apps, and—here’s a novel idea—a real live person who lives out there!!! So we assumed we were all set. And we sort-of were. With the person’s directions, we arrived in that area very early. So what are a couple of bon vivettes to do with the extra time? Check the shopping in the area, of course!!!

Let me tell you, we definitely felt we were out of town! (Which is a good thing.) And that feeling intensified when we got to the venue. 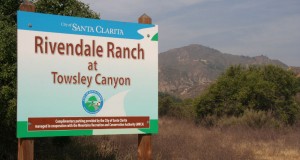 This is the sign that SHOULD have been at the entrance to the area.

First of all, we had to give up the actual person’s directions at that point, since we had strayed from the route to shop, and the apps were–how shall I say?–not exactly spot-on, so we finally arrived at a park with a different name. I was panicking, because I detest being late, which we would have been had we needed to go on a wild goose chase.

We asked the first two women we saw, who had just exited their car, if they knew where Rivendale Park was, and they said they had no idea, (even though we were all exactly there!) But…they were seated right next to us at the show, so we could not figure-out why they had outright lied to us!!! As we were exiting that park to go I know not where, we spied an older couple, who gladly told us that we were, indeed, in the right place! What was wrong with those other two??? I guess no matter how far from LA you may wander, there will still always be bi-atches!!! (And all the signage in the vicinity was wrong, as well.)

The seating for Camille was “cabaret style,” which means tables with folding chairs around them. But we were thrilled that we had brought fabulous low director’s chairs, (with side tables,) courtesy of Mr. X, and carried by strong-woman Laura, because we were able to get much closer to the stage. 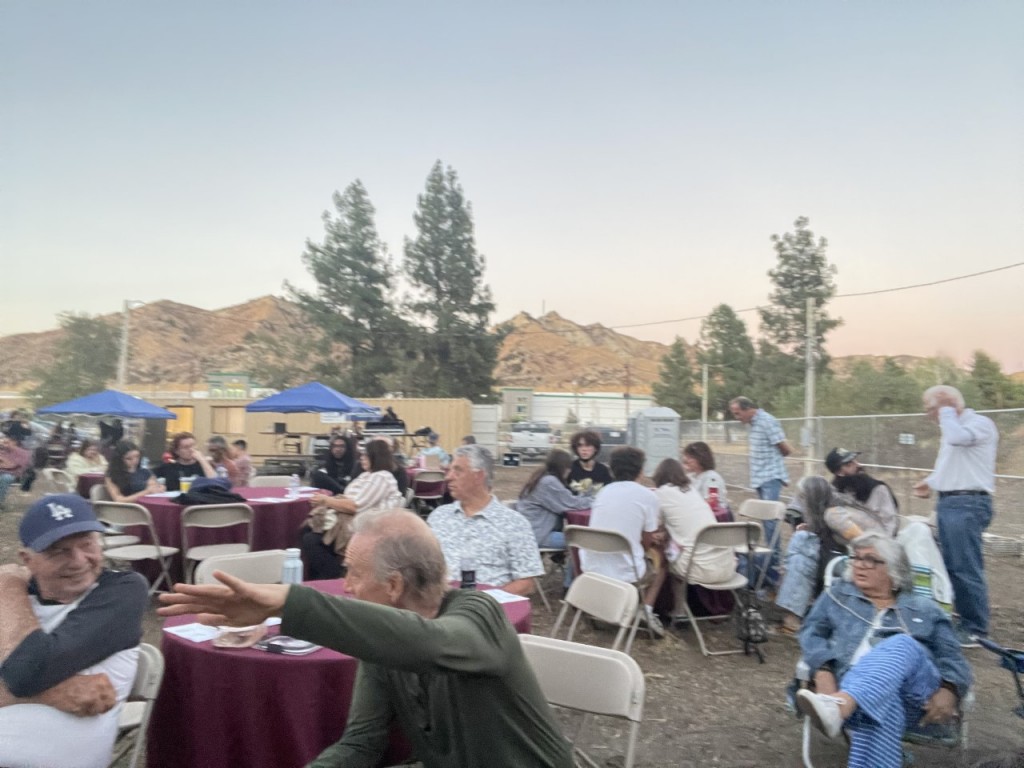 Part of the audience, pre-show. I used a blurry one on purpose so as not to intrude on anyone. Photo Karen Salkin, as is the one at the top of this article.

So, here’s what you should know if you ever go there in the summer. I tore my entire wardrobe apart, trying to find an outfit that would be appropriate for an Opening Night performance, while being naked enough for the horrendous heat in that area, (which I very erroneously expected.) And then I even came up with a comfortable design for my five hundred pounds of hair, which gets to be way too much in heat! And I threw all my jewelry on the bed, to find just the right accent pieces, not to mention that I had just done my nails in a fun and festive design for the occasion. 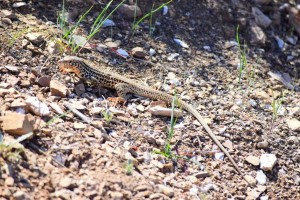 I didn’t take this pic, but it’s an actual one of the ground of the venue. Do you notice why I chose to get my good shoes dirty rather than walk barefoot? While you’re looking, let me know if you see my housekey down there!

And then…none of it was applicable!!! It was too dark for anyone to see what I looked like, anyway, and my white skirt now needs to be cleaned asap. But the worst part (which translates to “funny” for me,) was the absolute dirt ground! Believe me, we would have been totally fine with all that, if we had known beforehand—Laura had just come from a week of camping, and I was in a circus back in the day—but not with her cute sandals and my fancy beige shoes!!! OMG!!! (I love walking barefoot, so I thought of doing that here, but I didn’t know what my toes might find down there.)

And let me tell you how freezing I got, with no extra clothes in tow. The company’s website, and tickets, suggested (like a grandma!,) that “You MAY want to bring a sweater,” because “sometimes it gets a little chilly after the sun goes down.” But I couldn’t imagine it getting really cold there, so I just brought a tiny, very thin, cropped hoodie. So, at intermission, I emptied two canvas tote bags from the car, (losing my house key in the process,) and wrapped them around my legs! No lie. And then I sidled up to one of the tablecloths on an unoccupied side table, and pulled as much of it as I could over the front of my body. I swear—I felt like Carol Burnett in the Gone With the Wind skit!!!

By the way, this is the view of the stage I had because I didn’t want to move over and block the people behind me. I guess that man in front of me, who arrived much later than we did, didn’t get that manners memo. But, really, look at the good stage lighting that didn’t show up in the pro pix. Photo by Karen Salkin.

But now that you know what to do, (and also, what to not do,) I recommend seeing a show there. It felt like we were in some distant town seeing summer stock, a feeling I adore, having done it my entire growing-up in Brooklyn days. It’s the best, most peaceful feeling.

And more importantly, whenever you get a chance to see any of those actors I named, especially Nina Herzog, perform, I suggest you take that opportunity.