Trending
You are at:Home»THEATRE»THEATRE: ANDRÉ & DORINE
By Karen Salkin on June 15, 2022 · THEATRE

I first saw the award-winning international hit play from Spain’s Kulunka Teatro, André & Dorine, seven years ago, and declared it to be one of the best theatrical presentations I’ve ever seen. Upon the second viewing this past week-end, that assessment still stands.

So I’m thrilled that my fellow Angelenos are getting this very rare but brief opportunity again. You have only tonight through Sunday to see it, so I suggest you rush to get tickets at The Los Angeles Theatre Center downtown right this very moment!

André & Dorine is artistic interpretation of the highest order. Everything about it is perfection; the writing, staging, direction, music, costumes, set, and, most of all, the three performances.

“Brilliance” because the show is performed by just three actors, (José Dault, Garbiñe Insausti, and Edu Cárcamo,) playing a dozen or so characters, conveying every emotion and nuance while wearing giant non-moving papier-mâché heads! Which means the audience understands every single second of the ninety minutes from just the actors’ body movements! It’s entirely mesmerizing.

And it’s all pure movement; not dance nor mime nor even facial expressions; it’s somewhat akin to human marionettes. (They do use an actual puppet for one adorable scene.) And even with no words nor moving visages, we know exactly what each of the dozen or so characters are thinking at all times.

Photo by Gonzalo Jerez and Manuel D., as is the one at the top of this review.

My friend, Laura, who had never seen it before, was floored by everything about André & Dorine. She kept saying it was “amazing,” which it truly is.

On top of all that acting talent by the trio, they also co-wrote the piece along with Rolando San Martín and the director, Iñaki Rikarte. And Garbine is the creator of all the masks, which are basically giant heads that don’t move or change, but somehow give expression. They’re a major part of the brilliance. 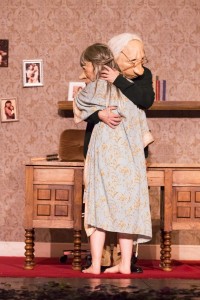 My favorite moment of André & Dorine; I cried my guts out from the tenderness. Photo by Svend-Andersen.

The “pain” is due to the subject matter—a few minutes into the narrative, we find-out that Dorine has Alzheimer’s. But while that’s an utterly depressing topic, the show portrays the situation so tenderly. And, since the couple’s relationship is told in flashbacks throughout the play, the audience never has time to dwell on the sadness until near the end. (And no worries—the final scene is really a “circle of life” one, so the audience leaves amazed and touched rather than down.)

Despite the heavy subject, the “charm” runs throughout. They make very clever use of music and sounds. Actually, everything about André & Dorine is beyond clever! It features one surprise after another. And there’s soooo much humor, done perfectly.

There’s one interesting situation that I found with the passage of the seven years between my viewings of the show. The Alzheimer’s theme got to me even more than it did the last time, which I’m thinking might be because I’m seven years older now, so nearer to the characters’ ages, which made it hit home a bit more. The creative team began their journey with the piece over a dozen years ago, so I wonder if it seems any different to them, as well, these many years on. And on that note, how did ones so young come up with it back then, when they were all in their late twenties or so? That’s as mind-blowing to me as the show itself is! 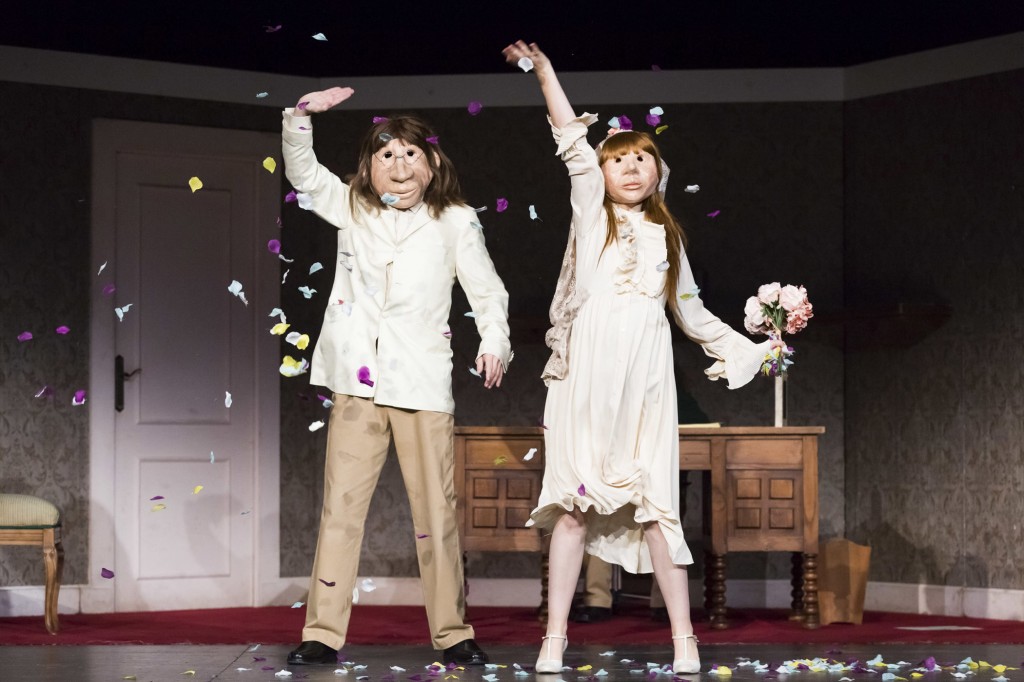 One of the very happy moments of André & Dorine. Photo by Svend-Andersen.

When I met the actors back in 2015, they spoke little English. But between my broken Spanish and my friend’s fluency in the language, we managed to have a really fun convo with the cast. And then, this past Sunday, when I got very lost on the way to the restroom in that cavernous venue, I bumped into Edu Cárcamo by chance, and…he spoke English perfectly! So perhaps they’ve all had a lot of English lessons in the space of these seven years. I wish I could have stayed afterwards this time to chat with them again to find-out that story.

As I advised in my previous review of the show lo those seven years ago, if you have even a semblance of a soul, rush right out to LATC and witness André & Dorine.  Just bring a box of tissues as giant as the characters’ heads.

I heavily suggest you also go to the website of the show itself because the pictures of what we don’t see in the production are revelatory! www.andreanddorinetour.com