Trending
You are at:Home»THEATRE»THEATRE: ANDRE AND DORINE
By Karen Salkin on May 27, 2015 · THEATRE

Just like this amazing production that I’m reviewing here, I have no words.  Almost.  I was still crying two hours after the performance ended. 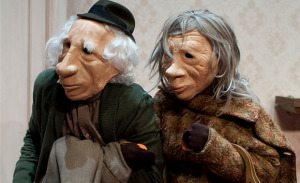 Andre and Dorine is an award-winning international hit that’s been around for several years now. (It already ran in L.A. in 2012; we’re lucky to have it return here for this short run.) So, this company from Spain, Kulunka Teatro, doesn’t need me to tell them how brilliant it all is. But, potential audiences do. That’s because the description of the piece is a depressing one. I actually had to be talked into seeing it.

Someone whose opinion I trust in these matters, (because I believe that he sees about eighty percent of all theatre in LA, for many years now,) told me this is the best show he’s seen in a decade.  If it’s not, I say it’s pretty darn close.

Andre and Dorine is a wordless play about Alzheimer’s, with the actors wearing masks. Can you imagine?

No, you can’t. Not even close. Actually, I don’t know how the creators even imagined this! What amazing people this young company must be! (I was really looking forward to meeting them on opening night, after the show, but I wound-up passing on that opportunity because I knew that I’d try to speak Spanish to them. And, trust me, they would have rathered that I, like the show, be silent!  No matter, because I didn’t really know quite how to work “muchas ropas” and “muy joven” into the conversation about this show.  For various reasons, those are the two main Spanish expressions I know.  Don’t ask.)  So, sadly, I didn’t get to explore their uber-creative minds.

I’ve never had such a hard time articulating what I feel about a theatre piece. If I had the physical talent that these Spaniards possess, I could portray it to you without words.  (So, picture Marcel Marceau explaining it to you.)

What the trio of actors do is pure movement; not dance nor mime, and somewhat akin to human marionettes. (They do even use an actual puppet for one scene.) These three actors, (Jose Dault, Garbine Insausti, and Edu Carcamo,) portray so many emotions with just their bodies and the “masks”  they’re wearing. (Said masks are basically giant paper mache-looking heads that don’t move or change, but somehow give expression. The artists who created them are brilliant.) But even with no words nor moving visages, we know exactly what each of the dozen or so characters are thinking at all times. (My guest told me after, “I heard every word.” I know exactly what she meant!)

They also make clever use of music and sounds. Actually, everything about Andre and Dorine is clever! There’s so much humor, done perfectly. It’s one surprise after another. Even the many teen-agers in the audience seemed to get it all.

This is artistic interpretation of the highest order.  Everything about it is perfection; the writing, staging, direction, music, costumes, set, and, most of all, the three performances.

Here’s the only rub: The topic is Alzheimer’s, which I have to admit, is hard to take. I started sobbing my guts out two thirds of the way through the ninety minute show. It’s especially depressing if you’ve ever seen someone go though that, which I have, on a lesser level. But it’s done so tenderly. And, since the couple’s relationship is told in flashbacks throughout the play, the audience never has time to dwell on the sadness until near the end, which is actually an uplifting one, in a way.

So, here’s my advice: If you have even a semblance of a soul, rush right out to LATC and witness Andre and Dorine.  Just bring a box of tissues as giant as the characters’ heads.