Trending
You are at:Home»THEATRE»THEATRE: ANASTASIA
By Karen Salkin on October 11, 2019 · THEATRE

I can’t tell you how much I’ve wanted to see this Broadway musical!  I was planning on seeing it on my upcoming trip to New York, but then it closed earlier this year, and I was so disappointed. So I especially thank the Pantages Theatre for bringing the National Tour to us lucky Angelenos! 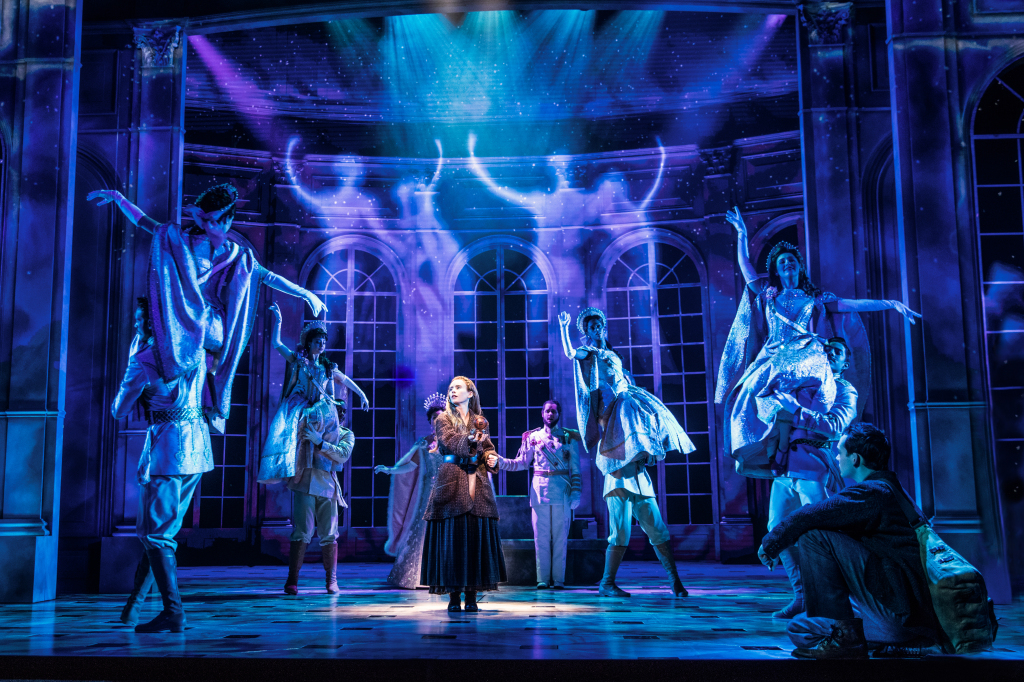 Photo by Evan Zimmerman, as is the one at the top of this page.

Because of one thing or another, I had not made it to this venerable Hollywood theatre in about seven months so I had almost forgotten how happening their opening nights are. It was tons of fun.

As was Anastasia itself. From the attractive blue curtain projection that greeted us as we walked in, to the upbeat audience, to the beautiful show.

In case you don’t know, this musical is based on the 1997 animated movie which in turn is based on the 1956 black-and-white classic film starring Ingrid Bergman which itself is based on an even older play. And all of them are based on the life and legend of Anastasia Romanova, the Grand Duchess of Russia, who was killed with her family in 1917. Or was she? For the next very many years, women pretended to be her, for the inheritance, since some people thought she had escaped the slaughter of her Romanov family by the Bolsheviks. (Look up that fascinating story for yourself if you’re as interested in the subject as I am.) 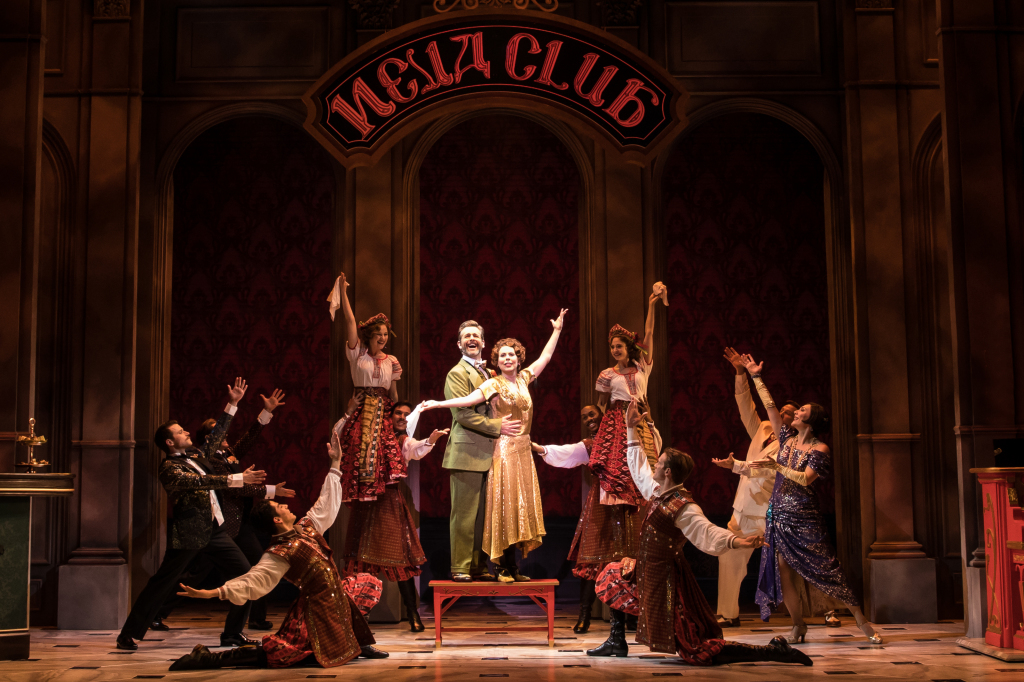 Edward Staudenmayer and Tari Kelly in the number that’s the hit of the show. Photo by Matthew Murphy.

I’ll laud the entirety of this musical in a minute, but first I must tell you about my absolute favorite aspect of the show—Aaron Rhyne’s stunning projections, which set the mood of each and every scene just beautifully! For the first time in awhile, I was sitting pretty up-close in this theatre, right smack dab in the center, so I got a perfect view of the “scenery,” but I can assure you that they make the very same impact on every seat in the Pantages—they are that spectacular! The friend I saw it with is a very-working singer and actress herself, so I expected her to concentrate solely on the performances, but she, too, was the most blown-away by the magnificent projections.

And the costumes really helped set all the different moods of this show, as well. Because of the twists and turns of the narrative, Costume Designer Linda Cho’s wardrobe had to portray the gamut from depressingly drab to classy and opulent. My mouth literally watered over Anastasia’s two gorgeous gowns in Act II and all the attire in the opening Royal Ball scene. If I ever attend an awards show again, I know just whom I’ll be calling to outfit me! 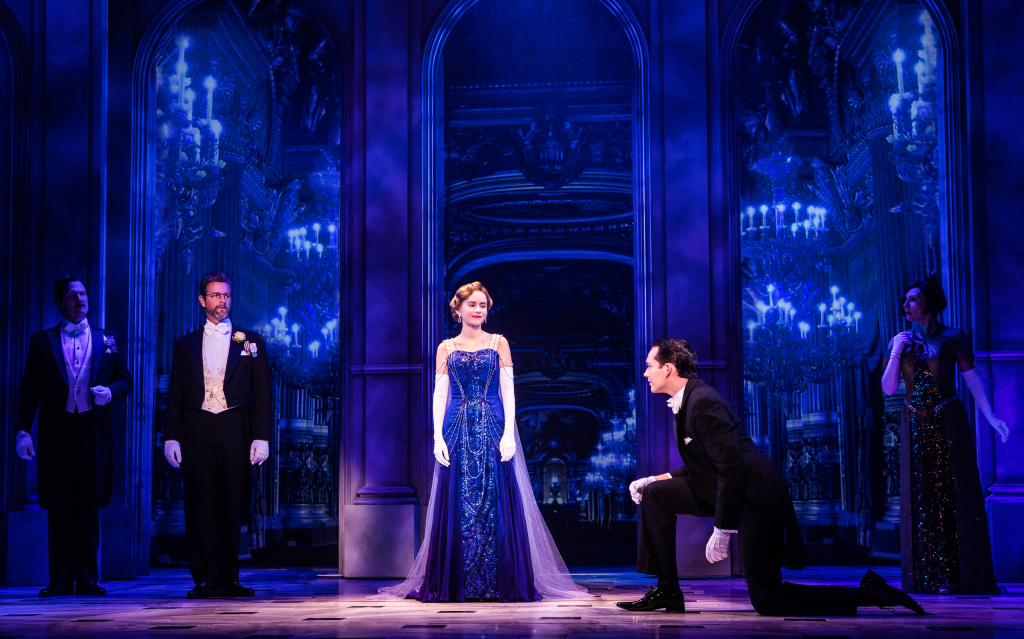 Look at that gorgeous blue gown on Lila Coogan! Photo by Evan Zimmerman.

And then there’s the music, a lot of it, some of it very famous. This stage show smartly uses the few songs from the cartoon film, but fleshed it out with about a dozen new tunes. There are so many styles that the music never gets boring.

I love the beautiful lilting Once Upon a December, which opens the show, and then is reprised once more in each act. Lucky us! I haven’t stopped hearing it in my head since then, (which is a good thing.) 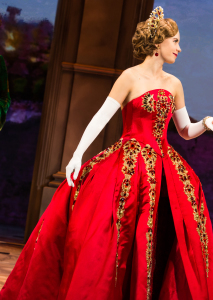 Act I closes with the Oscar-nominated Journey to the Past, which I first became familiar with when Tara Lipinski skated her short program to it when she won the 1998 Olympics. Even though, handled by the wrong singer, that song can sound like one sung by Miss America contestants, I’m happy to report that Lila Coogan does it justice in this musical.

My favorite musical performance of the entire show was a surprise one to me. The characters kept mentioning that they were going to meet up at the ballet, (but they used higher class words than that, of course.) So I was yearning to see an actual ballet, and sort-of spaced-out a bit to try to figure which one I can attend in the not-so-distant future. And then, all of a sudden, there’s a beautiful bit of Swan Lake right in the middle of the second act! And it’s stunningly performed by Ashlee Dupré, Mark MacKillop, and Ronnie S. Bowman, Jr. along with three ensemble members. It took my breath away. What a lovely ballerina Ashlee is. And let me tell you—most Broadway dancers are not ones who can perform so perfectly en pointe! Most dancers in musicals are just trained in jazz and contemporary. So extra kudos to the Anastasia casting people for finding such extremely talented dancers for this show!

Actually, the cast as a whole works well. Joy Franz as the Dowager Empress, (Anastasia’s regal grandmother,) is perfect. Her graceful rendition of Once Upon a December, (with delicate snowfall projections in the background,) set exactly the right tone from the get-go. 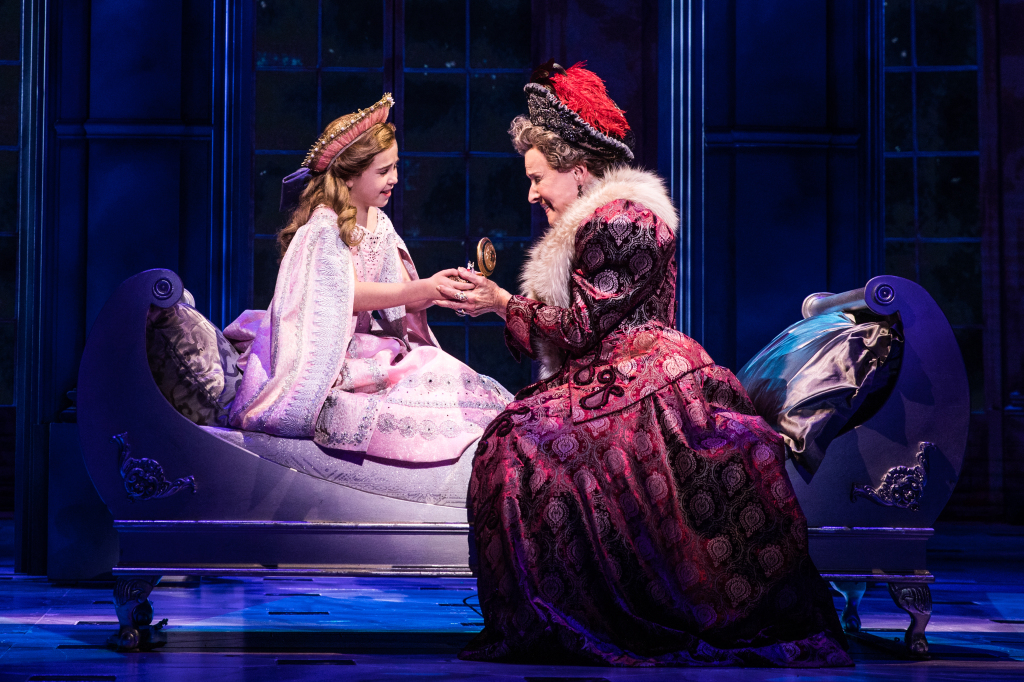 Edward Staudenmayer and Tari Kelly, as a reunited older couple, deftly play-up the schtick, which works to great effect. They were definitely the crowd favorites on opening night! That pairing reminded me a bit of Carol Burnett and Harvey Korman on the former’s old TV show. 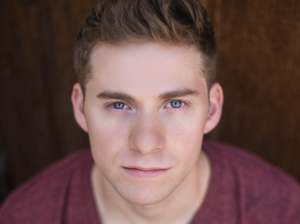 Jake Levy. (He joined the cast so recently that there are no pix of him in character, and I didn’t want him to be left-out of my review.)

Jake Levy just took over the pivotal role of Dmitry; I’m always happy to see a fellow UCLA theatre person succeed! After watching him work, I was shocked to learn that opening night was his very first performance of the part! He’s a natural. (And so cute, too.)

I always find reading a show’s program to be educational. I read every single word in it, (because that’s the polite thing to do,) and in this one I noticed that Jason Michael Evans, who plays the meanie Gleb, gave “endless love” to Yadier Molina in his bio. I re-read it several times because I couldn’t imagine that he’s talking about the St. Louis Cardinals catcher in the middle of mentioning his family and friends; that’s sort-of odd. But when I finally moved on, I saw that that he declared himself to be a “Proud St. Louisan,” and I totally got it. And he wrote this before the Cards amazing 13-1 victory over the Atlanta Braves to move on to the next round of the playoffs! He must have been jumping out of his skin over that win, which was happening as he was on stage on the opening night of Anastasia! What a Wednesday night for him. As a diehard Yankees fan, I totally understand the sports love. (But if it comes down to both our teams in the upcoming World Series, it’s every man for himself!) 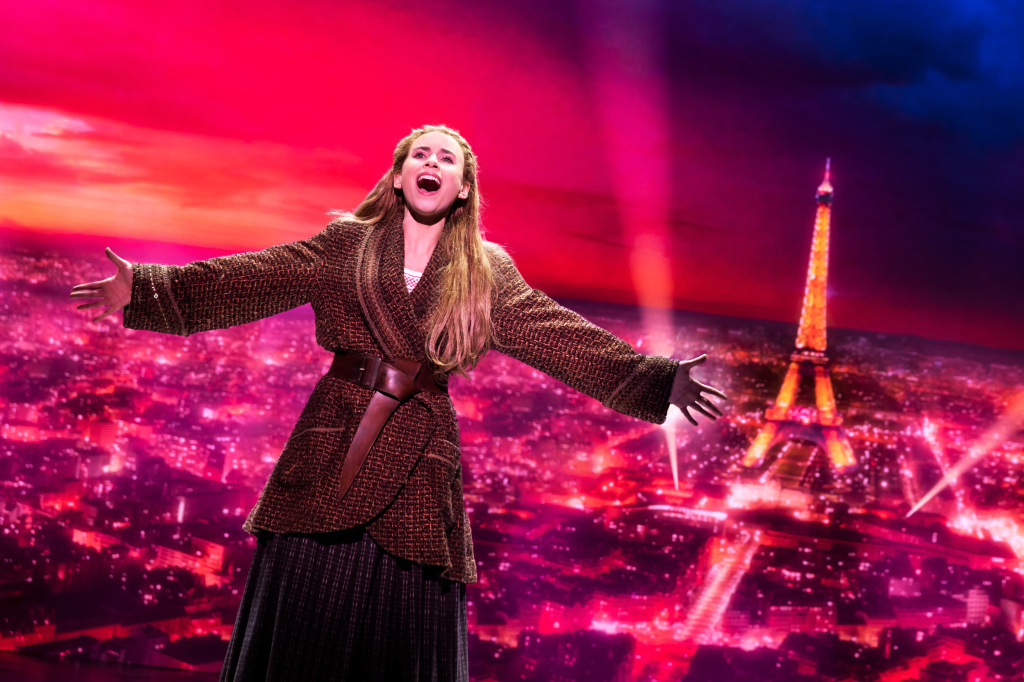 To sum-up the overall experience, I can honestly say that just about every presentation that the Pantages offers us is very worthwhile, and this one is no exception. While I’m not exactly sure that the true life saga of Anastasia makes for the best of musicals, I still highly recommend that, for all of the above reasons, you check it out while you have this opportunity. I’m confident that you will enjoy this journey to the past. (See what I did there?)