Trending
You are at:Home»THEATRE»THEATRE: AMELIE, A NEW MUSICAL
By Karen Salkin on December 19, 2016 · THEATRE

I think that by now you all know that I love seeing a happy show. And that’s exactly what Amelie, A New Musical is! (But here’s a conundrum–what will they call it after it’s been around for a while?) 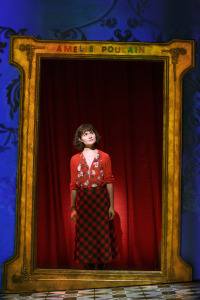 Phillipa Soo as Amélie. Photo by Joan Marcus, as is the big one at the top of the page.

On opening night, after the curtain fell, no one seemed to want to leave the theatre! Everyone was milling-around the lobby and front doors. I’ve never seen so many audience members want to hang around that long after a show ends! I’m sure some of the lingering may have been to use the photo booth, (which I’ll explain later,) or take holiday pictures by the gorgeously-decorated giant Christmas tree, but I have a feeling that most of the amity had to do with the upbeat nature of Amelie itself.

This new musical is having its pre-Broadway run at downtown LA’s Ahmanson Theatre, and the place was abuzz with excitement from the get-go. I appreciate having a show in Los Angeles before it goes to Broadway. For some reason, it makes me feel happy for my city to be somewhat powerful in the theatre category. (Is that a tad nutty of me? Or do some of you look at that situation the same way?) 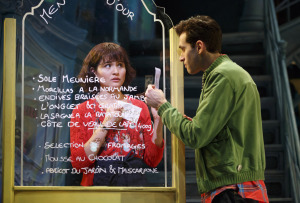 In case you haven’t heard about it yet, the musical is based on the 2001 hit French film, Amelie. (Duh.) I, surprisingly, had never seen it, although I erroneously thought that I had.  (I confused it with another of star Audrey Tatou’s movies, A Very Long Engagement, which I loved.  But, I’m happy to say, Amelie is much cheerier than that one.)  I think that seeing the flick beforehand would have helped a bit, but it’s definitely not a necessity.  (Actually, this version whetted my appetite to explore the film. As my friend and I left the theatre, we both said, “Now I want to see the movie!” I looked for it all week-end.) 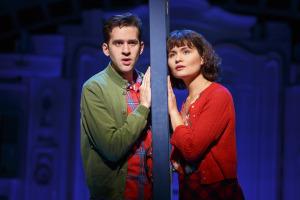 To me, Amelie, A New Musical is a sweet story of a girl who does good for others, rather than a tale that’s going anywhere in particular.  There is a love story, of course, (after all, it’s French!,) but the other bits don’t seem to lead up to it; rather, they all feel like separate little vignettes of one girl’s life. That doesn’t bother me in the least, though; you know I love a non-painful story, and that this is.

The staging is very creative, and the entire production is quite charming. It’s entertaining and amusing, as well. I found myself chuckling throughout. When you see it for yourself, don’t look away for even one second, or you’ll miss some clever little nuance. 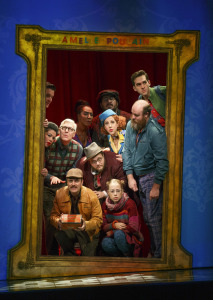 The cast of Amelie, minus the two Amelies! Photo by Joan Marcus.

Amelie is one of those almost-constant-singing musicals, rather than one featuring mainly dialogue, with the occasional ditty.  It’s also not a traditional “big production numbers” musical.  There is no ensemble of singers and dancers; rather, it’s a cast of only a baker’s dozen, with about half of the actors playing multiple small roles.

While there may not be any particularly memorable tunes, I was bopping in my seat the whole time, so I must have enjoyed the music.  I didn’t go wild for any of the voices, but I recognized the merit of them all.  Every cast member can definitely sing, and, with the whimsy of the entire presentation being the main focus, I really didn’t need them to wow me with their vocals. I was just thrilled that I could understand almost every lyric they sang!

The inventive touches in the show are fabulous.  Several of them come in the early parts, when Amelie is just a girl.  So, it starts-off well. It did lose me a wee bit along the way, but not enough for my interest to wane. The holding of my attention was due, in part, to the beautiful visuals, that begin right away. Scenic and costume designer David Zinn’s easily-moved, simple-yet-spot-on sets are my exact kind of colorful. 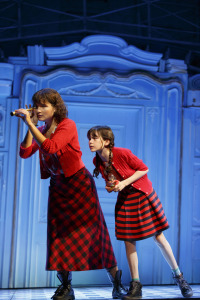 Phillipa Soo and Savvy Crawford. (Yes, they do appear together on-stage a couple of times in the show.) Photo by Joan Marcus.

The cartoonish (in a great way) look of the show is also seen in the very diverse, physically-interesting actors. Kudos to the creative casting, which I’m sure was a very conscious choice on the part of the producers. And each one of them is uber-accomplished–I’ve rarely seen a cast with so many credits, including for young Savvy Crawford, who plays Amelie as a child, and is excellent. (And she possesses the best Broadway name since Sutton Foster!)

Phillipa Soo, as the grown-up Amelie, is perfect for the role.  The make-up and hair people made her look a lot like Audrey Tatou in the film, at least from far-away. And that girl can sure carry a show, (which she did not have to do in Broadway’s Hamilton.) Amelie is just under two hours, with no intermission, so Phillipa is on stage for almost an hour and a half straight!!! And singing and running around almost that entire time! Very impressive. [Note: Phillipa is practically the whole show, so why is she listed just amongst the rest of the players in the program? Crazy billing!] 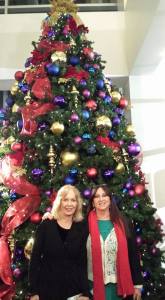 Jeanine Anderson and Karen Salkin in front of the gorgeous Christmas tree in the Ahmanson Theatre lobby. Photo by a kind stranger.

Okay, as promised earlier, the photo booth story. As we entered the lobby, we noticed a long line of patrons waiting to use a photo booth. We could not figure-out why it was there; they’re often part of the activities at the many parties I attend, but I had never seen one at the Ahmanson before. I usually spot people taking pictures of themselves with a poster of the show they’re attending that night, but that’s it. As Amelie went on, a prop photo booth appeared on stage, and it turned-out to be a major part of the story. So a light bulb went on over my head; I finally understood the one in the lobby. I decided that I must use it, as well, on the way out, but the line then was just as long as the one before it began! (And pictures by the tree were even more appealing to my pal and me, so that’s what we did.)

The auxiliary festivities, (before or after the performance, in the lobby, or on the beautifully lit-up grounds of the Music Center,) only add to the fun of the main attraction–Amelie, A New Musical. I’m sure it will be equally good to see anytime on Broadway, but we Angelenos are lucky to have it here as a holiday entertainment. So, don’t miss this wonderful opportunity!